Plurinational State of Bolivia, Ministerio de Relaciones Exteriores
Comunicado de Prensa, 23 de diciembre 2010
United Nations Approves Two More Resolutions by Bolivia:
Harmony With Nature and World Conference on Indigenous Peoples By Plurinational State of Bolivia
Photo by Michelle Cook, Navajo: Cochabamba 2010
Censored News http://www.bsnorrell.blogspot.com
Earlier this week, the General Assembly of the United Nations approved by consensus two resolutions presented by Bolivia. The first, entitled “Harmony with Nature,” asks to convene an interactive dialogue on International Mother Earth Day on April 22nd, 2011. Topics will include methods for promoting a holistic approach to harmony with nature, and an exchange of national experiences regarding criteria and indicators to measure sustainable development in harmony with nature.

This resolution recognizes that “human beings are an inseparable part of nature, and that they cannot damage it without severely damaging themselves.” It also seeks to contribute to the preparatory process for the United Nations Conference on Sustainable Development in 2012.

Both resolutions make reference to the World People’s Conference on Climate Change and the Rights of Mother Earth, which took place this year in Cochabamba, Bolivia.

In the last two years, the UN General Assembly has approved five resolutions initiated by the Plurinational State of Bolivia. Four were approved by consensus, and one in a vote with no country opposed (the resolution on the Human Right to Water and Sanitation). Never before in the history of Bolivian diplomacy has has the country had such an impact in the UN.
at December 23, 2010 1 comment: 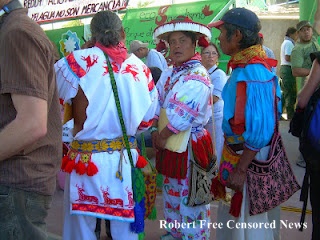 Dear Censored Readers,
Thank you for all your support during 2010. Thanks to readers and supporters, Censored News was able to provide original coverage of the climate summits in both Cochabamba, Bolivia, and Cancun, Mexico, this year. This included the efforts of Bolivian President Evo Morales and the Indigenous Peoples who gathered from around the world.
Censored News was also able to locate sponsors to Cochabamba for Yaqui ceremonial leader Jose Matus, Navajo youth Michelle Cook arriving from New Zealand, Navajo director of Dooda Desert Rock Elouise Brown, and Mohawk youth Chibon Everstz of Canada. A scholarship was also located for Ofelia Rivas, O'odham, for the Cancun climate summit.
Thanks to a sponsor, Censored News provided special coverage in Cancun of the Huicholes in Mexico and Gwich'in in Alaska, and their struggle to protect sacred lands, and the constant events of the grassroots movement La Via Campesina!
Thank you to each and every sponsor and contributor to Censored News in 2010.
A special thank you to Jose Matus and the Indigenous Alliance without Borders for making it possible for Censored News and Earthcycles to provide online video coverage of the Southern Border Indigenous Roundtable.
A very special thank you to each author, photographer and videographer who provided articles, photos and videos to Censored News in 2010.
Thank you to Native youth photographers Ben Powless, Mohawk, and Michelle Cook, Navajo, and photographer Brita Brookes for sharing so many photos.
Thank you to our regular contributors of columns, Kahentinetha Horn of Mohawk Nation News, Ofelia Rivas, O'odham on the border, the American Indian Movement, AIM-West, Western Shoshone Defense Project and other Shoshones, Lakotas' Owe Aku: Bring Back the Way, Navajos on Black Mesa, Dooda Desert Rock, Navajos Forgotten People and other Navajos, Lakotah Republic, Save the Peaks, Roberto Rodriguez, and all the others. Thank you to Leadhorse Choctaw, and Mohawk film crew, for the video of your 'Mississippi Burning' style arrest in Virginia. Thanks to Lakotas for their coverage of chasing away the US helicopter at Wounded Knee, S.D.
Thank you to Victor Rocha of Pechanga Net, the only news source to consistently publish Censored News articles. Thank you to the Indigenous Environmental Network for tireless struggle for Mother Earth.
Thanks to those who resist at Big Mountain on Black Mesa and elsewhere, to expose and halt the corporate beasts, including coal-fired power plants, oil and gas drilling, uranium mining and mineral extraction.
In remembrance, we express gratitude for the Indigenous Peoples who were assassinated and assaulted as they opposed mining and destruction, and stood up for autonomy and dignity, in Chiapas, Guatemala, Easter Island, South America, Australia, Africa, and elsewhere.
Most of all, thank you to all of our readers around the world, from activists in Italy to the families of stolen children in Australia; from Arctic Circle Gwich'in struggling to save the caribou birthing grounds and Indigenous struggling to save the Amazon rainforest, to families of the disappeared children in Argentina and Canada.
Thank you to the Mohawk Warrior Society, Zapatistas, the Nahautl of Guerrero, and all others who act with selfless courage for autonomy, dignity and self-governance.
Thank you to those who fight and expose the profiteering behind war, the civilian deaths from drones, US torture in violation of the Geneva Conventions, US covert drug running, US assassinations, US torture training by the military, and those of you who go to prison to expose these.
Thank you to each of you who sacrifice your time, your energy, your talents and your well-being for the good of mankind.
Wikileaks has given us an idea of how much is really being censored, manipulated and distorted by the mainstream media, who have been bought out and coopted by self-interest, corrupt politicians and decaying governments.
In the pursuit of the individual investigation of truth, Censored News looks forward to another year, our fifth year, of sharing your truths.
Brenda Norrell, publisher
brendanorrell@gmail.com
Censored News
http://www.bsnorrell.blogspot.com
at December 23, 2010 3 comments:

Russell Means: Opening of Indigenous Bank, I Bank, National Bank of the Republic

Republic of Lakotah
For Immediate Release
Chief facilitator: Russell Means 605-867-1025
December 21, 2010
The Republic of Lakotah announces the opening of the Indigenous Bank or I Bank as the first National Bank of the Republic.
The I Bank has operated for over seven years as an independent sovereign American Indian Bank and now comes under the protection of the Republic of Lakotah.
The Chairman/President and CEO of the I Bank is Mr. Ben Cummings.
The I Bank assets are in silver and gold bullion and are valued at just under $100,000.00 USD. The bank presently has over two hundred depositors.
For further information, please contact Mr. Ben Cummings at 605-867-2036 or cell 605-381-2028
at December 23, 2010 No comments: