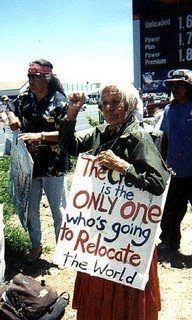 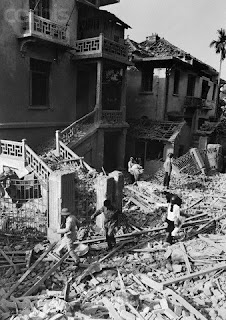 Agreed. He has no respect for Native Americans and has shown his disregard time and again by lobbying for bills and laws that were hurtful and abusive to Native peoples, thier needs and US treaties.

To facilitate his special interests, namely: Peabody Western Coal Company (the largest coal group in the US) and the Mohave Generating Facility in Laughlin (operated by Bechtel) delivering low cost coal produced electricity to Las Vegas's C...asinos in exchange for Beer Distribution Contracts afforded his wife's business, Hemsley Inc., John McCain personally, over the course of 25 years in the state legislature and federal senate introduced and arranged for the enforcement of unethical and constitutionally unlawful legislations which brutally displaced thousands of Navajo farmers onto a Nuclear Waste Dump, Church's Rock, New Mexico to live after brutalizing them for two decades in peaceful resistance. McCain assembled support to modify existing laws and produce new ones (Navajo Resettlement & Navajo Accommodation Agreement, Navajo Settlement, and amendments to PL 93-531, PL S.1003), illegal and unethical enactments designed to force Native American Navajo of the Dineh Band off their Arizona lands, moving them onto Church's Hill in New Mexico, depriving them of lands they've owned since 1500 AD. As a result, thousands of aboriginal elders passed away from shock associated with displacement into urban apartment settings and on to uranium contaminated waste sites such as Church's.

Using a phony Hopi tribal counsel composed of paid stooges, and Rangers comprised largely of BIA police, McCain and Peabody Western Coal Company progressively stole and exploited the Dineh's lands for mutual personal gain, brutalizing the natives, terrorizing elders and engaging in thuggery, forcing these peaceful people to leave "or else". They even bulldozed their sacred sites and sweat lodges, beating their members physically and abusing their elders to the point of terrorizing them and causing health failure and heart failures and worse. Fake Hopi Rangers (BIA Police) organized by McCain allies arrested and beat any peaceful resistors on their own lands and while celebrating holy days at their sacred sites. Three Presidential runs by McCain have been backed by the Mining, Power company and its Nevada Casino clients through street names organized in Nevada. McCain's wife has been granted huge Beer distribution contracts at her liquor company, Hemsley, by Nevada gaming interests. Two faced political favor banking has robbed the Dineh of any political support. The supposed "new lands" at Church's Hill are a Superfund Nuclear Waste Dump landfill site where children in schoolyards play among openly dumped uranium tailings! Children born in these communities have twice the national average of birth defects! http://www.cain2008.org/ Allison Harris

Can't we just start some on line petition to have John McCain removed from office and persecuted for his actions?

Yesterday I wrote to Allison Biney, chief counsel of the Senate committee on Indian Affairs, as well as sending a copy to the White House and my state senators and congress woman. I posted this letter on my facebook wall and invited anyone who wanted to, to just cut and pate my letter and send it. I will post a copy below, as well as email addresses. If every one will resend thier letters daily, when they first turn on thier computers in the morning, they will be deluged with mail and have to respond.

Keep standing together and fighting the good fight!!
Allison Harris

Here is a copy of my letter if you want to simply cut , paste, add your salutation , and add your name, rather than mine. I sent to the Whitehouse, my congressman and senators, and the Senate Committee for Indian Affairs.

I am writing to r...equest that Senator John McCain be removed from the Senate Committee on Indian Affairs. Senator McCain has a long track record of human rights abuses against the Native American people, as confirmed by the United Nations Special Rapporteur, Hon Abdeltalif Amor, and his condemnation of human rights violations inside the US, over the stripping of rights and forced resettlement of these gentle and deeply spiritual band of Dineh-Navajo Indians from Arizona, swept off of lands they'd owned since 1500 A.D. so that Peabody Western Coal could mine the Coal from beneath their farmlands and tap their wells to slurry pipe it to a power station in Nevada.

Senator McCain has no respect, concern or consideration for the Native American people, nor any understanding of thier culture, tribal laws,US treaties, and basic human rights. He is driven purely be his connection to fossil fuel companies, greed and money. In putting his self serving interests first, he has time and again allowed the theft and rape of sacred Native lands and a continued genocide against the Native People. Senator McCain is not fit to be any part of the Senate Committee on Indian Affairs, and I stand with the People of the Sovereign Indian Nation, and demand his immediate dismissal from this committee.

Below please find articles and videos for your further education and consideration.

Am I My Brothers Keeper
http://www.cain2008.org/See More