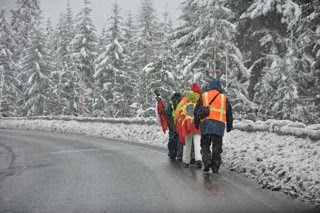 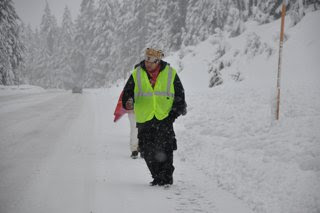 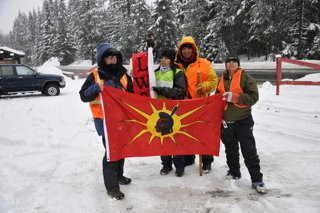 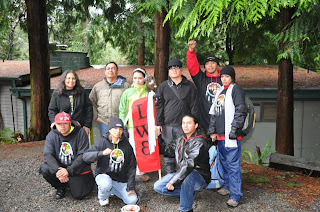 Longest Walk 3 northern route for the reversal of diabetes, through the snow. Photos by Christina Akaquiqui. (Double click on images to enlarge.)
.
Longest Walk northern route: The snow hasn't dampened their spirits
By Brenda Norrell
Censored News
.
Native American youths continued walking and running through the snowy mountains of Oregon this week, on the Longest Walk 3 northern route for the reversal of diabetes.
Lisa Peake, Ojibwe/Pomo, said Thursday night that she loves all the weather that the Creator sends. "Weather or not, everyone knows I love the snow, rain, clouds, sunshine, wind and all that our Creator puts in front of us. Welcoming all weather, prayers to all, above 'n below and all directions."
During today's interview on Censored News Blogtalk Radio, Carl 'Bad Bear' Sampson, Western Shoshone, encouraged Native youths to come out and join the walkers. Speaking from Warm Springs, Oregon, Carl said the main need is for support vehicles, which carry walkers from their stay places to the route and carry supplies.
Carl said the walkers are walking across America to bring about a reversal of diabetes with a return to traditional foods and healthy ways of life. He encouraged youths to listen to their traditional elders.
When asked about the snow in the mountains of Oregon, he said, "The snow plows were blowing snow up on us." Listen at:
http://www.blogtalkradio.com/brenda-norrell
Lisa, Bad Bear, and Craig Luther, Navajo, walked across America on the Longest Walk northern route in 2008 for the protection of Mother Earth and sacred places. Craig is now walking and running with his father. Watch the video of the first day: http://bsnorrell.blogspot.com/2011/02/video-long-walk-3-northern-route-begins.html
.
Long Walk lip balms and soaps for the walkers
Cindi Beech LaMar, Choct 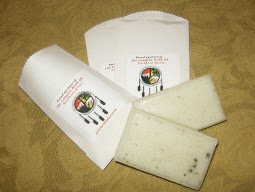 aw/Irish from Mississippi, found a unique way to show her support for the Longest Walk northern route. She's donating all sales from her homemade lip balm and soap to the walkers.
"I decided to help support the Longest Walk 3 Northern Route for a couple of reasons. First and foremost, I lost a dear uncle to diabetes just a few years ago. He was a fighter to the end, even after they had to amputate his feet, and then his legs. It was too late for him, but there are so many thousands of others who can reverse their diabetes by making changes in their diet and exercise habits. Even small lifestyle changes can make a huge difference.
"Secondly, when I heard that Chris Francisco, my friend of several years, had volunteered to be the coordinator for the Longest Walk 3 Northern Route, I didn't hesitate to offer my help. I wasn't sure what I could do at first. I tried to organize an event, but it didn't pan out. So I decided to put my little home-based business (http://www.provherbials.com/) to work and created Special Edition lip balms and soaps to sell as fundraisers in support. They sell pretty well, too! At the University of Washington Winter Powwow in January, we totally sold out of the Vanilla lip balm (in the manly black tubes!) and sold out of the Cedar & Sage soap as well. I am busily making more for online orders and for upcoming powwows. ALL of the money from the sales go directly to the LWNR3, 100%, I keep nothing.
"The LWNR3 Walkers will need continuous support for gas, food, water and other necessities, and people can help support them by making direct donations on the LWNR3 website http://www.earthbornproductions.com/ or by purchasing lip balms or soap from http://www.provherbials.com/ Either way 100% of donations and purchases will go to aid the Walkers on their journey across the nation, taking with them the message that we CAN reverse diabetes in Native America."
Yakoke and Many Blessings, Cindi
Cindi also serves as website administrator for the LW northern route: http://www.earthbornproductions.com/
Lip balms and soap: http://www.provherbials.com
Contact her at: dancingrabbit2011@yahoo.com
.
Longest Walk Northern Route cell contacts: Contacts: Chris Francisco at (503) 515-6239 or Christina 'qui-qui' at (360) 241-6562
Posted by Censored News, publisher Brenda Norrell at February 17, 2011