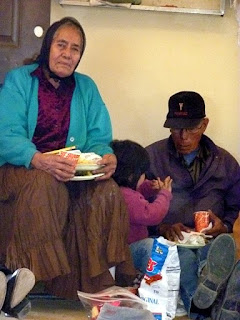 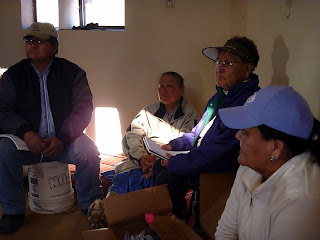 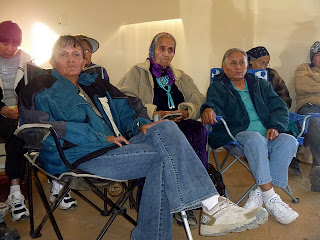 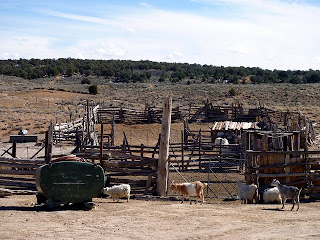 Carlos Begay, Jr., Black Mesa opened the meeting about 1 pm, served as meeting facilitator and opened with a prayer. Then Carlos introduced his mother Glenna Begay, his uncle Bilta Begay who has black lung, his sisters, Salina and Helena Begay, his father, Carlos Begay, Sr.

Glenna Begay, Black Mesa: I use the land like I did in younger years. In our tradition you never say this is my land. This is where I grew up with livestock, a cornfield. I am still using a lantern and haul water and wood. I live off my livestock and crops. There is no compensation from Peabody. I have no electricity, no running water. I want my roads graded, gravel and culverts in the wash for the mud season. The roads are usually ungraded. I asked Peabody for help and Walter Begay, Black Mesa Review Board on numerous occasions. All the natural springs are depleted from the slurry pipeline. Peabody’s water well is my only water source now and it needs to be upgraded for our use with the best available technology. In the early dawn there is a lot of dust and smoke over the valley. We all have respiratory problems.

Bilta Begay, Black Mesa: I was a Peabody employee. We endured this hardship everyday. No help. In the beginning before Peabody came in there were negotiations between a few people. Only the older folks were involved and we were told local residences would be employed. This never really happened and due to the strip mining, the vegetation has disappeared and the people who lived on the land. It is due to Peabody that I have health problems. I see so many doctors about my heart, black lung, sickness due to coal dust. So many others have passed on with health problems, black lung, silicosis, accidents. People die there.

Billy Austin, Black Mesa: I grew up 2 miles from here. Due to Peabody a lot of people relocated to different regions. When I was young I participated in the negotiations. It was only for people with grazing permits. Mainly older people negotiated. When that happened, people were promised utilities, water, most were never met and people got dislocated from the land, never compensated, corrals bulldozed. All the coal was taken out. There were so many springs. When I grew up traditional, we made offerings to sacred places. Everything now is displaced and we are forced to travel great distances to haul water. The windmills are broken. We go to the Chapter and Peabody to ask for help. No help. We are neglected from everywhere. No electricity, no water lines. The closest water is Peabody and Peabody is threatening us they will shut it off. Last year we had deep snow. No help. People were trapped in Cactus Valley. We had to get the National Guard to help. Our homes are suffering from blasting damage, our streams are contaminated and dark from coal dust. The air is full of dust and smoke and it settles in our lungs. Jimmy Manson died of black lung. I have three young grandkids. They have delicate lungs and we have no where else to go. The ozone layer is gaping hole. The world was good in the past but now it is contaminated. The ozone was balanced and now it is ruined and we can’t fix it. The mine should stop.

Leta O’Daniel, Big Mountain: There used to be a lot of rain. Not much now. Pollution is really happening. I live 10 miles down the road from Peabody and the blasting moves my Hogan. My home is coming apart. A lot of coal dust blows around. Can you help us? Can you make our lives a little better. We have no water and no electricity. Make Peabody help. I burn kerosene, propane. The fumes are affecting our health . We smell the coal dust all the time. I would like electricity and running water. A school. Peabody here should make our lives a little easier. We go through a lot of hassle to fix dinner at night. It is a difficult life. There are only elders out here now and Peabody will not help. We want decent roads, emergency assess in hash weather. The roads are so bad it causes erosion and sometimes the roads cave in. It makes our trucks rattle. Some of my children are in the Marine Corp. Where will they live when they come back home? It seems to me we are going backwards. Peabody made a lot of promises. What I see makes me really sad. Please help us, our children and grandchildren. Our homes are beyond repair and are not safe. My daughter’s hogan roof caved in from the snow. It is not safe for her to live there. Mr. Weatherspoon here, you are a council delegate for Hardrock, Forest Lake and Black Mesa. I am happy there is a lot of interest by agencies who are listening to our voice for the first time with Navajo Generating Station, Salt River Project, Central Arizona Project.

Rena Babbitt Lane, Black Mesa (did not have a chance to speak. Marsha Monestersky assured her, that her comments would be included in these minutes.) Rena Babbitt Lane said: We live in on top of Black Mesa, Horse Corral Point and Look Out for Horses Point, Water Chimney, above the route of Peabody Coal Company’s/Black Mesa Pipeline, Inc. coal slurry pipeline. Burt and Caroline Tohannie are my neighbors. A few times the pipeline burst and they had to weld off the pipe at the water shaft contaminating our land and water resources. My use of my customary area is my livelihood. I am a medicine woman herbalist healer and hand trembler. Medicine men and patients ask me to gather herbs and prepare it for them. All the washes, canyons where most of the herbs are found are gone. The springs have dried up from Peabody’s coal slurry pipeline. The herbs are gathered with offerings but the land and water sources are dry and the US Department of the Interior’s Bureau of Indian Affairs (BIA) has capped off and dismantled four of the windmills near where we live. I am forced to travel 17 miles each way over rough dirt roads to get water. This caused the fame of our truck to break. Peabody should help fix the road and provide bulldozers to dig out water impoundments at locations we identify near our homes. My grandfather built some of these earth dams but they are filled with sediment. All my children and myself want a home. I live in a house that is very small. All I see are broken promises to rebuild from the past but it is not there anymore. I want to see all my children have homes and hogans and I want access to water and sanitation. I want Peabody’s Kayenta mine to close. They are not a good neighbor.

Marsha Monestersky, Program Director, Forgotten People: I see you are not taking notes. I will submit my notes and a Peabody Health Effects study that was used as evidence to oppose US DOI’s OSM approval of Peabody’s Black Mesa life-of-mine permit. The last time I saw Roy Tso was to accompany him and David Brugge, anthropologist on OSM investigations to help protect his burial and sacred sites from Peabody bulldozers including the burial site of his son. Roy died shortly afterwards of black lung and silicosis. I knew Jimmy Manson. He died of black lung. James Johnson and Lee Nez (Lena Manheimer’s brother) all have black lung and silicosis. James Johnson was part of the exploration team and he, Roy Tso and Calvin Etcitty were drillers for blasting. They all died. Lee Nez, Simon Crank and Paul Johnson are still around but they all have black lung.

Postscript: On February 19, 2011, Jay Turner asked if his comments could be included. He said: I am a 10-year Miner (2 plus years as representative of miners) and I have seen the failure of MSHA and FMSHRC-ALJ to uphold Federal Mine Safety & Health Act (Public Law 95-164) Miner protective provisions, as evidenced in Pro Se 105C Discrimination case (copies of case related docs available from me 661 242-3000), and audio recording of FMSHRC’s “open meeting” (Docket No. WEST 2006-568-DM) available at: http://www.fmshrc.gov/new/meetings.html
– refer: “October 7th, 2010” – “Audio of Meeting”. Please read.
Thank you, Navajo Generating Station for paying for Subway sandwiches and drinks. Thank you, Andy Bessler of Sierra Club and Marie Gladue of Black Mesa Water Coalition for organizing the community tour. Notes prepared on 2/20/2011 by Marsha Monestersky, Program Director, Forgotten People, (928) 401-1777, forgottenpeoplecdc@gmail.com, http://www.forgottennavajopeople.org/
Also see: Navajos Forgotten Peoples Right to Water, United Nations:
http://www.scribd.com/doc/49227137
at February 20, 2011 1 comment:

La Luche Sigue, the Struggle Continues!
By Brenda Norrell
http://www.bsnorrell.blogspot.com
Censored News
A diplomatic cable from Peru released by Wikileaks once again exposes the US Embassy's bias toward Indigenous activists and their supporters in Peru. Once again, James Nealon of the US Embassy in Lima names names as the US carried out espionage.
Nealon reports on protests designed to halt the private industry from profiteering at what he calls "archaeological sites," which are sacred places to Indigenous Peoples.
Protesters said they "were fighting to prevent America from buying Machu Picchu."
Nealon wrote on March 4, 2008, "Radical union and student leaders recently led a strike to protest a law that would facilitate private investment in tourist services at archaeological sites, effectively shutting down the city of Cusco February 21-22. Residents of Cusco broadly rejected the law and said it favored deep-pocketed investors and tourists over poorer local residents ..."
Nealon expresses relief that Venezuela didn't seem to be involved in the protests, continuing his theme of placing Venezuela on his watch list.
As in another cable, Nealon targets Indigenous activists and their supporters. The publisher of an Indigenous newspaper is singled out in the cable.
Nealon wrote, "Hugo Blanco: Blanco is an unaffiliated radical leader that led the effort to block roads in Anta Province outside Cusco city, according to local contacts. Blanco is a prominent anti-systemic actor who was jailed for leading an indigenous insurgency in Cusco in the 1960s. He now publishes a newspaper called 'La Lucha Indigena' (The Indigenous Battle)."
Psst Nealon, the Indigenous Struggle Continues, La Luche Sigue.
Read cable and see the list of names:
http://213.251.145.96/cable/2008/03/08LIMA389.html
La Lucha Indigena newspaper on the web (Spanish)
http://www.luchaindigena.com/
Previous article: Wikileaks: US engaged in espionage of Indigenous activists in Peru
http://bsnorrell.blogspot.com/2011/02/wikileaks-us-engaged-in-espionage-of.html
at February 20, 2011 No comments: