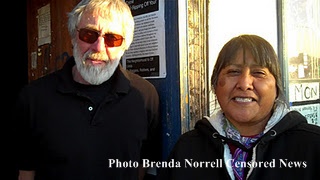 It’s an honor and a privilege to be back on Tohono O’odham land, and especially because I’m neither Native nor local. It’s an honor that way to be part of this effort to get some support for traditional O’odham culture and the elders. It’s also great to be back at Dry River. Dry River is so awesome, and tonight shows that.

I identify primarily with the anarcho-primitivist point of view. It goes by several names; there are some Native folks we know who call us neo-primitivists, and green anarchy is a common descriptive term, but it really doesn’t mean much of anything unless it connects with the concerns of Native people and has an awareness of the indigenous dimension. I think that we are seeing more of that, and it makes me really happy to see that.

Last week up in Scottsdale, that was on offer: the connection, the alliance if you will, between black bloc and indigenous people, anarchists standing with Native people, standing in defense of the elders. We saw this almost two years ago at the anti-Arpaio march—a similar situation. It was less disruptive, but it was at that time the emergence of what was called the DOA–– Dine O’odham Anarchist group––a concerted effort involving people who came together from those identifications.

And we’re also seeing at the same time, and it seems like so many things are moving so fast… after what happened up at Scottsdale last week, on this past Sunday in Oakland, the Occupy Oakland considered the proposal to change the name Occupy Oakland to De-Occupy Oakland, or De-Colonize Oakland. And this is a direct challenge, I believe, from what was accomplished in Scottsdale, this kind of emerging joint effort, the realization of its primary importance. What happened was that the proposal was narrowly defeated. They needed a two-thirds majority to change it; a sizeable minority, just over a third blocked that. I wasn’t there; but some of us have had some pipelines to that long discussion. There’s an awesome YouTube video of some of the highlights of this 3-hour debate.

I thought, we are seeing a real clarification. We’re seeing what’s really at stake, and I think we’re coming to a kind of crossroads. And one thing that stood out: it’s making certain choices a little more recognizable or a little harder to avoid, it seems to me. One of the people spoke in support of not changing the name, in support of sticking with Occupy, in support of not recognizing in a name the importance of De-Occupy, these lands are occupied, we’re standing on stolen lands, those of us who are not Native. His statement was, “We need to defend our legacy.” This in support of the word Occupy, that identification.

Well, what is that legacy that’s so important to defend? It’s nothing else but the legacy of the Left—that glorious eurocentric commitment to Progress. How much more Progress can we stand, can anybody stand, can the species of this planet stand? And yet they continue with this leftist program that consists of things like domestication, civilization, industrialism, mass society, mass production, industrial life, mass globalization, mass culture—some of these things are just so glaring, the difference between mass culture and all of its emptiness and pathology, compared to indigenous cultures. But these people cling to it.

Various people are getting it. This is a turning point. Which way do we go? Which way does the anarchist thing go? That’s for starters for some of us who are anarchists.

When I was here last I mentioned a visit to Oregon from Elena Poniatowska, a grand old lady on the radical side from Mexico City. She was in Eugene giving a public lecture. I believe she turned 80 on the day that she was there. And she gave a marvelous talk about her decades of being a pain in the butt to the different regimes in Mexico City, a lot of stories, just a really cool woman. She didn’t mention anarchy in Mexico, and you know we do have some pipelines even up in Oregon as to the upsurge of anarchist activities in Mexico. There are all kinds of acts, across the spectrum: animal liberation, earth liberation, burning down McDonalds, burning down shopping malls, really going to town.

Anyway she didn’t mention it, and I kind of thought to myself, well, she’s an old lady of the left, anarchy probably isn’t her thing. But during the Q and A I asked, can you comment on this, can you give us your take? And she kind of paused and she said, “I don’t really know about that.” Then she broke out in this big smile and she said, “I can’t tell you much about the specifics, but I can tell you this: there is nothing that is happening now that isn’t anarchist.”

And I think there is more awareness even just since last year, when you see these action groups in Mexico that are explicitly anti-civilization and anti-technology. I think we’re seeing again the realization of the indigenous touchstone. That’s the key connection, that’s the thing that has almost been lost, but now we have a chance to learn from that and stand with that and renounce this suicidal trip that frankly, the Left has been so much embracing. Of course, there are individuals on the Left, I was on the left, I was a union organizer, was a marxist years ago, so that’s me too, and people can change. But these people that defend Occupy in explicitly those terms—“We have to defend our legacy”—you know, some people maybe will remain clueless. That’s the choice we have.

You could start at any place, but for anarchists, what does that mean? Anarchy is the only game in town, partly by default. Who is a socialist or a communist anymore? It’s so discredited. It’s up to us, it’s our responsibility to figure it out and to connect in the right way. So much is moving so quickly. We see the Occupy thing, and there’s the choice for them: what kind of orientation do we want? We see the Arab Spring, and some of that is so incredible, like Syria, every day and night people are getting killed, but they’re there, all the time. There is a radical energy at loose in the world, and we need to see that and be bolstered by that.

The one thing that everybody wants, the one thing that we can talk about and potentially connect on, is community. We all know it’s gone, every developer and every politician likes to talk about it all the time. But there isn’t any community in mass society because community has to be face-to-face. That is the big draw for Occupy. It’s finally come to me, being mystified by the Occupy movement. Occupy isn’t real swift in terms of ideas, but it’s not about ideas, it’s about community. When people get to have some community, that is a turn-on. That in itself is a value, even in circumscribed locations which are now being attacked in a pretty coordinated way, but I don’t think it’s going away.

I heard a Ute elder say in Salt Lake City a few years ago that “Civilization is the grave of community.” That was a very profound thing to say and worth thinking about.

There’s nobody that doesn’t know that everything is going to hell so fast in terms of everything you can look at. Just in the past few days, the biggest spike in heat-trapping emissions in history; in terms of the U.S., 14 extreme weather situations that cost a billion dollars apiece or more; and the biggest increase in temperature in history. Maybe there are a few right-wing pinheads who can somehow make themselves believe it isn’t here, but it is here, the eco-catastrophe is here. Something that is even more of a grabber in a certain way is what’s happening on the personal/interpersonal level. 80 million people who have significant insomnia. The number of people on anti-depressants. Now we’re seeing these family massacres, we’re seeing these horrendous shootings every day.... How else can we measure the emptiness, the lack of community?

When you don’t have community, you don’t have solidarity, you don’t have these ties that hold people together, social ties, then anything can happen. And anything is happening. And then the Left wants to talk about its legacy, and they don’t want to talk about de-Occupy, de-Colonize. They have no interest in respecting the integrity of indigenous cultures or lifeways or traditions, the very thing we need to be aware of and that we need to stand together with. When the elders feel it appropriate to speak to us, we need to respect that. We need to listen and we need to go forward with that consciousness of what we can get from that. Where else can we get it? What else is the legacy? I know what legacy I’d like to learn from.
Posted by Censored News, publisher Brenda Norrell at January 02, 2012