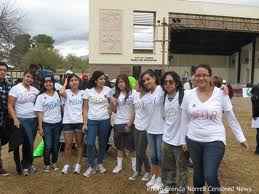 TUCSON -- High school students from the now-forbidden Mexican American Studies classes in Tucson spoke out during Martin Luther King Day here, protesting the school board and state of Arizona's decision to ban their classes and their culture.

Describing the seizure of Chicano and Native American books from his classrooms, one student said it was an attempt to "take away our power."

"Knowledge is power," he said, describing how education and knowledge form beliefs and, "who we are." He said school officials entered his classroom and removed all the books.

Another student described how ethnic groups other than Latinos at Tucson schools can still discuss their cultures, while Mexican American culture discussions are now forbidden. Further, she says her teachers are now "under a microscope" and issues like feminism, oppression and Martin Luther King are forbidden topics.

Students, describing the trauma, said it was as if they were in Nazi Germany.

Tucson schools seized Chicano and Native American books from classrooms after the board voted Tuesday, Jan. 10, to forbid Mexican American Studies, rather than fight the decision by the state school head. The Tucson Unified School District board was threatened with the loss of millions of education dollars unless the classes were banned.

Louise Benally, Navajo resisting relocation at Big Mountain on the Navajo Nation, joined students protesting outside the board meeting on Jan. 10.

Simon Ortiz, world acclaimed poet, author and professor, responded to the banning of books by Chicano and Native American authors.

Roberto Rodriguez, professor at University of Arizona, is also among the nation's top Chicano and Latino authors on the Mexican American Studies reading list. Rodriguez' column about this week's school board decision, posted at Censored News, is titled: "Tucson school officials caught on tape 'urinating' on Mexican students." http://drcintli.blogspot.com/

"The attacks in Arizona are mind-boggling. To ban the teaching of a discipline is draconian in and of itself. However, there is also now a banned books list that accompanies the ban. I believe 2 of my books are on the list, which includes: Justice: A Question of Race and The X in La Raza. Two others may also be on the list," Rodriguez said.
"That in itself is jarring, but we need to remember the proper context. This is not simply a book-banning; according to Tom Horne, the former state schools' superintendent who designed HB 2281, this is part of a civilizational war. He determined that Mexican American Studies is not based on Greco-Roman knowledge and thus, lies outside of Western Civilization.

"In a sense, he is correct. The philosophical foundation for MAS is a maiz-based philosophy that is both, thousands of years old and Indigenous to this continent. What has just happened is akin to an Auto de Fe -- akin to the 1562 book-burning of Maya books in 1562 at Mani, Yucatan. At TUSD, the list of banned books will total perhaps 50 books, including artwork and posters.

DA Morales writes in Three Sonorans, at Tucson Citizen, about the role of state schools chief John Huppenthal. "Big Brother Huppenthal has taken his TEA Party vows to take back Arizona … take it back a few centuries with official book bans that include Shakespeare!"