Censored in Indian country: Why we don't stay home

Censored in Indian country: Why we don't stay home 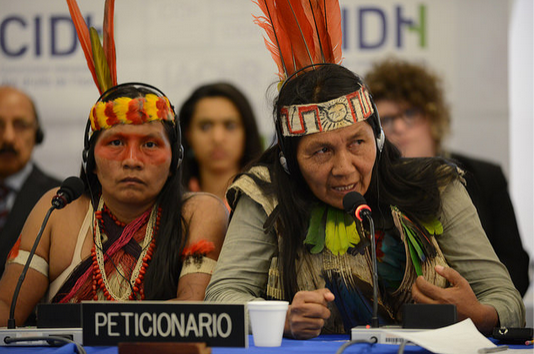 By Brenda Norrell
Censored News
Photo Ecuadorian women testify by Inter-American Commission on Human Rights
Watching the film trailer for '43' is a chilling reminder of why we do this, why we keep going without pay, why we do the work, spend the time, spend the money, take the risks.
It is why we, the unpaid journalists, don't stay home.
People die, people go missing, and it is up to the un-paid, the un-bought journalists, those who have not been corrupted by salaries and power, to continue the work.
Earlier, those of us on the Zapatista caravan through Mexico, with Marcos and the Comandantes, had the honor of being in Iguala, Guerrero, Mexico. We know the power and the strength of the people there. We know why the corrupt in Mexico attempted to extinguish the light of these 43 future teachers in Guerrero.
On the Zapatista caravan, in Michoacan, a young Nahautl warrior from Guerrero, who only had one leg and was in his twenties, hopped on board our bus from Sonora, with O'odham, Yaqui and Mayo leaders. Our Nahautl friend hopped, aided by a wooden stick for a cane. He volunteered immediately for the security detail. When I asked him why he was on the caravan, he said, "We have no food at home.”
During October, in Sonora, Mexico, I interviewed anthropologists who gathered to discuss the formation and militarization of the northern border. With the responsibility of protecting Indigenous burial places and cultural places in Mexico, they discussed the impacts of the ongoing violence along the northwest border in the state of Sonora, Mexico. The militarization of the border, and encroachment of the United States into Mexico, includes weapons manufacturing at sweat shops.
Indigenous Peoples and their cultural and burial places are in the path of the ongoing violence in northern Mexico, including Tohono O'odham, Comcaac (Seri), Yoeme (Yaqui) and all of the others who live in the states of Sonora, Sinaloa and Chihuahua.
As I write this, along the northern border, Mohawk Nation News publishes these words of the missing and murdered Indigenous women: “In Val d’Or Quebec ongwe’hon:weh women reported being systematically raped and tortured by the psychotic Quebec Police. Lonnie Landrud of Quesnel BC witnessed police murdering a young ongwe’hon:weh woman and disposing of her body on the Highway of Tears. He became aware of 8 other women being murdered by this same cop. Landrud reported the details in this video to every police agency in the hierarchy right up to the Prime Minister and Governor General.”
As I write this, Christine Prat, now back home in France after our visit to Apaches sacred Oak Flat, is publishing video interviews with Wendsler Nosie, and his granddaughter Naelyn Pike, 16, at Oak Flat, where Apache are defending sacred land. Arizona Sen. John McCain sneaked a land exchange bill into the defense spending bill that would open Oak Flat to massive copper mining by Resolution Copper. The interviews are in English with French subtitles to share with the world.
As I write this, Michelle Cook, Dine, sends news of the testimony before the Inter-American Commission on Human Rights in Washington. Indigenous women from Ecuador, defending human rights and the environment, were among those from throughout the Americas testifying. Mayan from Chiapas testified on the Massacre in Acteal.
Navajo from New Mexico testified how the United States government has failed in radioactive cleanup and left a legacy of death, with Cold War uranium mining tailings strewn, which have poisoned the water for Navajos. Navajo children still play in those radioactive rocks.
In its slow and toxic ongoing genocide, the United States and its corporate partners have targeted Indigenous lands and resources throughout the Americas. The testimony from defenders of the environment and human rights includes US torture and renditions and excessive police force against African Americans.
Indigenous representative gathered in Washington D.C, Oct 23 at the Inter-American Commission on Human Rights to give testimony regarding the need to secure and meaningfully protect sacred sites and landscapes, including San Francisco Peaks. Mount Taylor, and the recent land exchange and proposed copper mining at Oak Flat.
Those testifying are Leonard Gorman Executive Director, Navajo Nation Human Rights Commission. Dr. Ora V. Marek Martinez, Historic Preservation Officer, Navajo Nation. Vernelda Grant, Historic Preservation Officer San Carlos Apache Nation, and David Martinez, 1st Lt. Governor, The Pueblo of Laguna.
The testimony highlighted current inadequacies within the legal framework of the United States  in protecting indigenous sacred sites particularly those located off lands beyond the jurisdiction of Indian Nations.
The thematic hearing was titled: Impact of extractive industries on sacred places of indigenous peoples in the United States Hearing, 156th ordinary period of sessions.
It is the reason we don’t stay home.
Watch the videos from Apaches' Oak Flat, Sonora, Mexico, and the Inter-American Commission on Human Rights in Washington, and read more at Censored News
www.bsnorrell.blogspot.com
Mohawk Nation News www.mohawknationnews.com

Brenda Norrell was a longtime staff reporter for Indian Country Today. In 2006, she was censored and terminated. As a result, she began Censored News, now in its 10th year with no advertising, grants or revenues. Norrell began as a reporter at Navajo Times, during the 18 years that she lived on the Navajo Nation. She was a stringer for AP and USA Today. In the years that followed, she traveled with the Zapatistas and continued to work unpaid after being blacklisted by all the paying media. Norrell and Govinda at Earthcycles provided live five month radio coverage on the Longest Walk northern route in 2008, and provided livestream coverage of events across Indian country, including the Peltier Tribunal and Boarding School Tribunal, both in Green Bay, Wisconsin, and climate summits in Bolivia and Cancun.
at October 26, 2015 No comments: 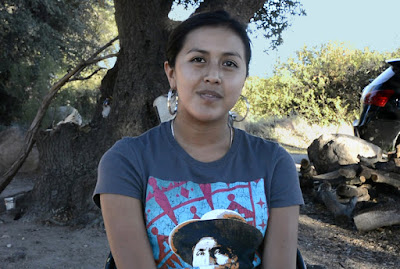 Special thanks to Christine Prat and her husband Theo for our visit to Oak Flat. -- Brenda, Censored News
at October 26, 2015 1 comment:

BBC = Big Bad Company
Please post & distribute. nia:wen.
MNN. 26, 2015. The majority believe the official story about 911, that 17 hijackers flew the two planes into the buildings. The official story is the steel columns melted from the burning jet fuel. Steel melts at 2800 degrees F. Jet fuel maximum burning temperature is 1796 degrees F. Tony Rooke put his mind on the problem, as we all should. He voiced his concern to a judge regarding the BBC’s complicity in the terrorist act of 911.
The BBC reported 27 minutes before Building 7 fell. Everybody in the world saw this. The judge agreed and ruled against the BBC. Tony Rooke does not have to pay his tv bill because he proved the BBC absolutely knew it was going to happen.
Building 7 came down 27 minutes late.
Super Tramp says: “Now they’re planning the crime of the century. Yes, its well worth the fee. Read all about their schemes and adventuring. Yes, it’s well worth a fee. So roll up and see how they rape the universe, how they’ve gone from bad to worse. Who are these men of lust, greed and glory? Rip off the masks and let’s see. But that’s not right, oh no, what’s the story? Look, there’s you and there’s me!? “
CRIME OF THE CENTURY super tramp
911 fourteen years later.
Iceland banskters jailed.
http://www.ve7kfm.com/murdered_women.pdf Obvious cops killing our women
More on Family Compact power, go to MNN 1556 CDN RIGHT NAMES 26oct15
Maine individuals suing Federal Reserve $600 million.
MNN Mohawk Nation News kahentinetha2@yahoo.com or more news, books, workshops, to donate and sign up for MNN newsletters, go to www.mohawknationnews.com More stories at MNN Archives. Address: Box 991, Kahnawake [Quebec, Canada] J0Lthahoketoteh@hotmail.com for original Mohawk music visit thahoketoteh.ws