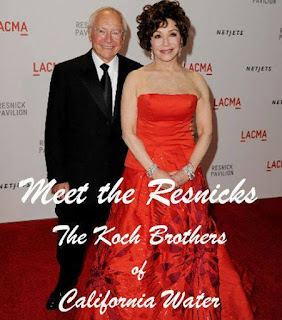 Beverly Hills billionaire Stewart Resnick and his wife, Lynda, the co-owners of The Wonderful Company, are the  Power Couple of Corporate Agribusiness in California.

They exert their influence over California politics in a variety of ways, including dumping many hundreds of thousands of dollars into the campaign coffers of Jerry Brown, Senator Dianne Feinstein and many other politicans, both Democrats and Republicans, over the years, along with making contributions to the arts and Stewart Resnick's favorite environmental NGO, Conservation International.
The Resnicks have become infamous as the "Koch Brothers of California Water" for the many thousands of dollars they contribute to candidates and propositions in California every election. For example, Stewart Resnick donated $150,000 to the Yes on Prop 1, Governor Jerry Brown's water bond, in 2014. (www.dailykos.com/...)
The media, particularly alternative outlets, have revealed the instrumental role that Resnicks played in promoting campaigns to eviscerate Endangered Species Act (ESA) protections for Central Valley Chinook salmon and Delta smelt populations and to build the fish-killing Delta Tunnels.
Read more »
at January 02, 2016 No comments: