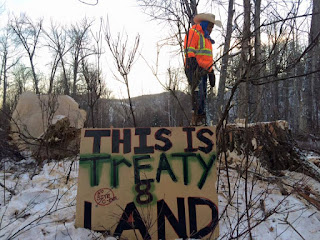 Treaty 8 Stewards of the Land call on Trudeau to stop megadam in B.C.’s Peace Valley 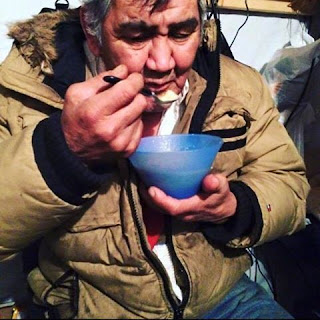 Joined by local landowners, Treaty 8 Stewards of the Land say they will not permit BC Hydro to proceed with plans to clear-cut forests around the Rocky Mountain Fort site on the west side of the Moberly River. The site, selected by explorer Alexander Mackenzie, was the first trading post in mainland B.C. and is situated in the traditional territory of Treaty 8 First Nations.
The $9 billion Site C dam would flood 107-kilometres of the scenic Peace River and its tributaries, including the traditional hunting and fishing grounds of Treaty 8 First Nations. In late December, despite three on-going First Nations court cases against the dam, BC Hydro built a bridge across the mouth of the Moberly River in preparation for logging in the proposed reservoir area.
In addition to its legal, economic, political and archaeological significance to indigenous and non-indigenous people, the camp is the gateway to the rest of the threatened Peace Valley. BC Hydro has served notice that the camp must be dismantled. 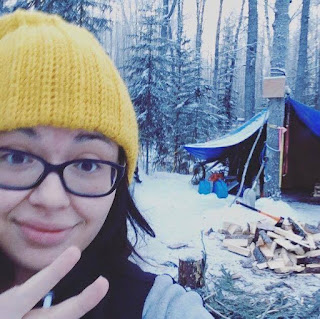 “Logging and flooding this part of the Peace Valley will irreversibly harm our ability to hunt, fish, trap and exercise other constitutionally-protected Treaty Rights, especially since much of the rest of Treaty 8 Territory has been devastated by other hydro-electric, oil and gas and industrial developments,” said Art Napoleon, “To have any meaning, these treaty rights require a land base and waterways where there are wildlife and fish, and which is capable of supporting a diversity of plant life. Treaty rights also include management level decision-making to protect moose calving grounds, medicine harvesting and berry picking, and spiritual practices – all of which will be obliterated by Site C.”
A delegation of First Nations chiefs told Prime Minister Trudeau’s key Cabinet members in December that suspending federal approval of the Site C dam is a critical litmus test of his government’s promised new relationship with Indigenous Peoples.
“The Prime Minister says that Canada’s most important relationship is with its Indigenous Peoples and that he promises to uphold and respect Treaty Rights”, said Helen Knott, “This is what we are trying to do at a grassroots level. I speak as Great Great Granddaughter of Chief Bigfoot, the last to sign Treaty 8 in 1911, and I am trying to honour my Grandfather’s original intent and uphold those rights he meant to protect. I ask Prime Minister Trudeau to also honour that original intent.”
“We applaud the court cases being brought by West Moberly, Prophet River and others, but they take time to wind their way through the courts. Meanwhile, before the court cases are even heard, BC Hydro is destroying the very valley that these court cases are intended to protect. The way I see it, they are stealing from future generations, both Indigenous and non-Indigenous. We are not here just for us but for the ones that will come after us,” said Helen Knott. “As individual Treaty 8 First Nation members, we cannot stand by. Do I want to be arrested? No, I am here peacefully doing what I believe is right and needed but this land is a part of who I am and I will take a stand for it. Prime Minister Trudeau can stop BC Hydro from destroying the Peace Valley. Until he does, we will”.
Media Contacts:
Helen Knott, Prophet River First Nation member and Treaty 8 Steward of the Land
Art Napoleon, Saulteau First Nations member and Treaty 8 Steward of the Land
at January 08, 2016 No comments:

Mohawk Activist 'Splitting the Sky' Foreboding words about his own death 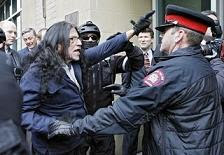 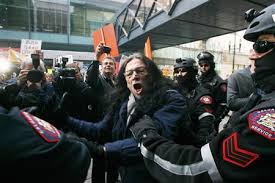 "Please, if someone tells you that I died from a slip and fall – don’t fall for it!" ~ Splitting the Sky

Mohawk Warrior and Champion of the People Dies – March 13, 2013. A great loss to the people, to the nation, to the resistance, anti-imperialist  movement right across Great Turtle Island.

On March 13th, Dacajeweiah, Splitting-the-Sky, 61, left us forever when he passed away in his home in Adams Lake, British Columbia. Dac’s colonial name was John Boncore Hill, from Six Nations. “From Attica to Gustafsen Lake,” and thereafter, he was a warrior, a comrade, a brother, a father, a grandfather, a friend.
We deeply mourn his loss.
The family will release a biographical statement and details of memorial arrangements in due course. With deepest love to his wife, She-Keeps-the-Door, and children. We stand with Dac’s many many co-fighters and friends. He loved the People. The AIM song is dedicated to the continuance of the resistance after a warrior has fallen A.I.M. song
MNN Mohawk Nation News kahentinetha2@yahoo.com  For more news, books, workshops, to donate and sign up for MNN newsletters, go towww.mohawknationnews.com  More stories at MNN Archives.  Address:  Box 991, Kahnawake [Quebec, Canada] J0L 1B0.


Mohawk activist Splitting the Sky once said, "Please, if someone tells you that died from a slip and fall -- don't fall for it." That was exactly what happened when he was found dead in 2013. Here are some of his words and actions in videos.

Life-long activist, Splitting the Sky appeared at St. Ann's Academy on November 29, 2008. In this impassioned and authoritative speech he meticulously follows the bloody and labyrinthine trail of corruption and money, which leads him to conclude that a cast of top-level financiers and international secret service agencies were behind the events of 9/11. All time views Google Video: 166,867 © 2008 Lazarus Productions