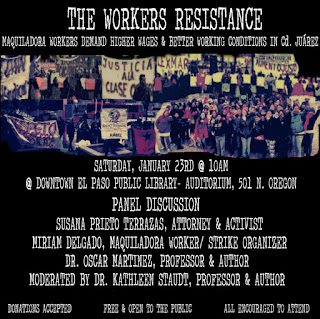 Panel Discussion on the Maquiladora Strikes in Ciudad Juárez

El Paso, TX/Ciudad Juárez- On Saturday, January 23rd at 10am at the El Paso Public Library's Auditorium- Downtown, 501 N. Oregon, the public is invited to attend a bi-national panel discussion about the maquiladora workers strike in Ciudad Juarez.  Local El Paso leaders and community members have organized a support committee for the Juarez Maquiladora Workers, whose wages are as low as $30/week, and were fired for organizing against low-wages, unsafe working conditions, sexual harassment and discrimination.

Juárez factory workers have been fired for their participation in union organizing and demanding a pay increase equivalent to about .35 cents/day. Maquiladora workers at Lexmark, a U.S. owned Fortune 500 Company, have been on strike since November of 2015, and in response to the firing of about 100 workers, strikers have set-up encampments, or platones outside the factories, demanding the right to form an independent union.

Lexmark strike organizer, Miriam Delgado states, "They didn't provide face masks or gloves to protect us, (and) many people have injured hands. They cut our salaries for being even slightly late, even if our children were sick and we had to take them to hospital, and we had to put up with harassment from supervisors."

Last month, Dr. Kathleen Staudt and Dr. Oscar Martinez published an op-ed piece about the economic reality of maquiladora workers in Ciudad Juárez, stating, "In real terms, today's line workers make about half of what they made in 1975."

Since the passage of the North American Free Trade Agreement (NAFTA), U.S. corporations are incentivized to move factories to Mexico where low wages are considered a 'competitive advantage'.  Mexico's lax labor laws and poor enforcement has created an environment of exploitative business practices. According to the U.S. State Department's 2014 Report on Human Rights in Mexico, "The government did not consistently protect worker rights. Mexico's general failure to enforce labor and other laws left workers with little recourse regarding violations of freedom of association, poor working conditions, or other problems."

Currently, a renegotiation of NAFTA, known as the Trans-Pacific Partnership (TPP), would expand trade with Pacific-Rim countries, to include Malaysia, Vietnam and Brunei; countries with a long history of poor labor laws and human rights abuses.