By Remi Bald Eagle, Intergovernmental Affairs
Cheyenne River Sioux Tribe
Censored News
EAGLE BUTTE, South Dakota (March 27, 2017) Today Dakota Access, LLC announced in a court filing that oil has been placed in the Dakota Access Pipeline under Lake Oahe, an action that is currently the subject of a lawsuit brought by the Cheyenne River Sioux Tribe, the Standing Rock Sioux Tribe, and other members of the Great Sioux Nation because it endangers waters the Tribes rely on for their very existence.
Despite this development, the United States District Court for the District of Columbia has yet to rule on a pair of motions challenging the legality of the United States Army Corps of Engineers’ authorization of the pipeline. The Tribes allege that the Corps violated federal statutes, treaties, and its trust responsibility to the Tribes when it granted permission for the pipeline. The Court is expected to hear and rule on those motions very soon.
If the Tribes are successful on either of the motions now pending before the district court, the court can vacate the permits granted to the oil company and stop the flow of oil under Lake Oahe.
Cheyenne River Sioux Tribal Chairman Harold Frazier explained the Tribe’s position: “My people are here today because we have survived in the face of the worst kind of challenges. The fact that oil is flowing under our life-giving waters is a blow, but it hasn’t broken us. Our legal fight is very much alive and we believe that ultimately we will prevail.”
In addition to the claims now pending in the district court, the challenge under the Religious Freedom Restoration Act is currently pending in the D.C. Circuit Court of Appeals.
at March 27, 2017 No comments: 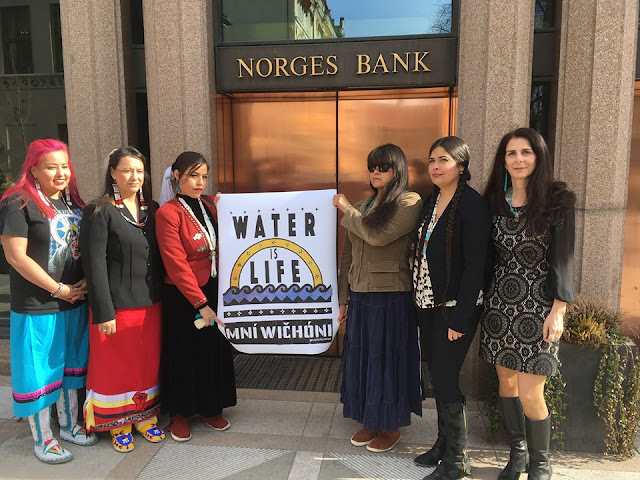 Photos 2 and 3 courtesy Michelle Cook. Michelle said today in Norway, "Our delegation is doing a wonderful job of educating Norway on Indigenous human rights violations and the need to divest completely and immediately from the DAPL!"

Please post & distribute.
MNN Mar. 27, 2017. The true power of the United States is run by the Pentagon. Just like Canada is run by the military from the 14th Floor of Indian Affairs. Trump is nothing more than a corporate front man for the military occupation of great turtle island. The corporate owners pay for each vote in Congress in the pretend democracy.
SEE VIDEO of a settler speaking about true reconciliation. https://cultivatingalternatives.com/2013/03/04/an-open-letter-to-my-settler-people-adam-barker/ [settler alternatives]
Trump is losing to China in the trade war and wants a hot war. Nothing has changed since the invaders landed on our shores.

US#1, CORPORATION OF THE UNITED STATES OF AMERICA!
We the victims of genocide have always raised this issue. They have to be charged for the genocide they knowingly committed.

US REPUBLIC OF WAR.
Benjamin Fletcher, English Governor at Albany speaking to Haudenosaunee, 1696: “We are become a small people and much lessened by the war. If the people of Virginia, Maryland, Pensilvania, the Jerseys, Connecticutt and New-England who have all put their hand to the Covenant Chain will joyn with the inhabitants of this place we are ready to go and root out the French and all our enemyes out of Canada…. We renew the covenant chain in behalfe of the whole House, the Mohaques, Oneydes, Onondages Cayouges & Sinnekes.” —
Speak, the truth is still alive.
Def Leppard describes the end of the American corporate experiment: [When the walls came tumpling down]: “But we understood the grand finale, fulilment of a prophecy told many years before. So all that was left was “All the women were captured and chained and national suicide was proclaimed. An new America fell to the ground, and all the children lay crippled lame. But all the nation came together in fear of the thought of the end. No more would we fight in the streets. No courage had we to defend, when the walls came tumpling down, when the walls came tumbling down, everybody ran as they screamed at the sound”.

Trying to wipe out our memory. http://www.cbc.ca/news/thenational/sophie-gr%C3%A9goire-trudeau-instagram-post-backlash-1.4016716
DAPL WATER PROTECTORS. https://shadowproof.com/2017/02/12/us-still-colony-dakota-access-pipeline-keeler/
US Is ‘Still A Colony’: