The Tohono O'odham government in Sells, Arizona, tribal police, U.S. Border Patrol and other federal agents, halted most supporters and reporters on their way to the Border Wall Protest. These police and agents threatened to arrest and impound their vehicles, if supporters and reporters continued to The Gate. However, in the end, the Traditional O'odham Authority in Mexico carried out their protest of Trump's Border Wall. Thank you to Lynn Saul for allowing Censored News to use her photo from the protest today.

BREAKING NEWS UPDATE
Sat., March 25, 10 a.m.
All supporters and reporters heading down to the Border Wall Protest have been stopped by police and federal agents. White police working for the Tohono O'odham government, and federal agents, have stopped all reporters and supporters.
Supporters and reporters are now stranded at the Bashas parking lot, Shell Gas Station, and Visitor Center, waiting for O'odham to escort them down, so they will not be charged with trespass. Please see the written threat being issued by police and federal agents on tribal land, which has the Tohono O'odham Police Department logo on it.
The protest of Trump's border wall is hosted by the Traditional Authority of O'odham in Mexico. The border dissects O'odham land.

8:30 a.m. update -- The O'odham in Mexico, Traditional Authority, are beginning their rally against Trump's border wall in Sonora, Mexico.
Meanwhile, on the U.S. side, there is breaking news, as supporters head down to the border protest. The US Border Patrol is stopping supporters on the Tohono O'odham Nation, and issuing this warning right now.
There are ACLU legal observers involved, and we will keep you updated on the legal issues as we receive those. We are in touch with the O'odham in Mexico will keep you updated.
O'odham are watching to see what official position the elected Tohono O'odham government in Sells, Arizona, will take, as the U.S. Border Patrol issues these warnings to those arriving on the US side, south of Sells, Arizona, known as San Miguel Gate.
The threat letter below being issued by the US Border Patrol agents has the logo of the Tohono O'odham Police Department at the top.
It is clear that the US Border Patrol wants to stop the protest. The intimidation tactics, threats and abuse of the US Border Patrol continues on Tohono O'odham Nation land. -- Brenda, Censored News.
Update at 9 a.m.
Supporters have been stopped in the tribal capitol of Sells, Arizona, by a white officer with the Tohono O'odham Police Department, and federal agents. They were told they would be arrested for trespass if they proceeded on tribal land without an O'odham tribal member with them.
Update 9:30 a.m.
Arizona Daily Star reporters from Tucson have been halted and are leaving. They asked people to contact the newspaper with your story: Lauren Renteria, Jordan Glenn, Nicholas Smallwood.
The following written warning is being issued by U.S. Border Patrol agents to supporters arriving, on Tohono O'odham Nation land, right now.
There are supporters waiting at Bashas, and at the Shell Gas Station, in Sells, for O'odham to escort them down to border wall protest, so they will not be charged with trespass. They have all been stopped by white police working for the tribal government and federal agents.
. 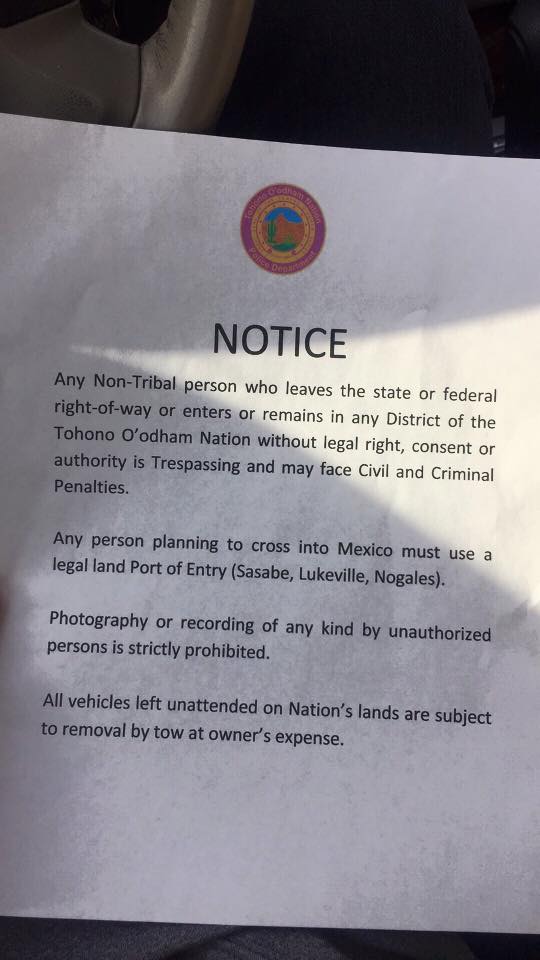 Published on Mar 26, 2017
Tribal leaders from the O'Odham Nation in Mexico invited people from both sides of the United States-Mexico border to arrive at the San Miguel Gate to protest Trump's plan for a wall. Numerous activists arriving from the United States side were pulled over by police and federal agents and ordered to leave or risk arrest for trespassing. 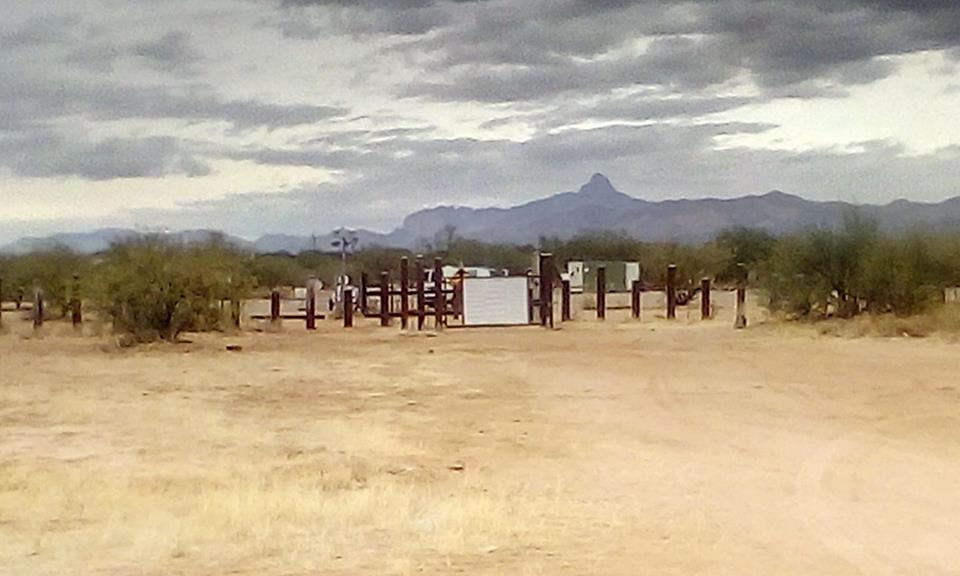 By Brenda Norrell
Censored News and Narco News
O’odham in Mexico rally today, March 25, at the border to protest President Trump’s plan to build a border wall that would separate their families and communities, interfere with ceremonies and threaten the lives of O’odham who depend on medical services.
The Traditional O’odham in Sonora, Mexico, welcome the public and media to join them for prayer, traditional songs and speakers, beginning at 7 a.m. on Saturday, March 25, 2017.
"Everyone is invited to support the O'odham community in bringing awareness to the negative effects that the US President Donald Trump's physical barrier would have on the livelihood of O'odham living on both sides of the border,” the Consejo Supremo O’odham in Mexico said.
The international border dissects the traditional homelands of O’odham, who live on both sides of the US Mexico border.
President Trump’s proposed border wall would deter O’odham traditional ceremonies, separate families and threaten the lives of those who depend on emergency medical services.
Further, the border wall in Arizona would halt the natural flow of migration of wildlife, including jaguars and pronghorns.

Wo'osan Gate, known as The Gate, is located south of Sells, Arizona. It is a US Mexico border crossing for O'odham with tribal membership identification. 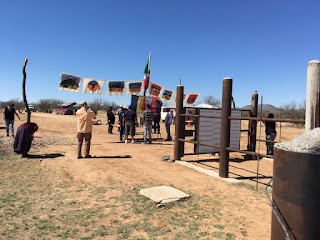 In the 1980s when Big Mountain Elders went down to Tohono O'odham lands for a spiritual gathering at the base of Baboquivari Mountain, the federal Indian police blocked the main road. Local elders immediately mobilized guides to help us and other participants to bypass via old back roads. By repairing a few washed out spots, we all made into the restricted area and set up the camp. It was a great gathering which included hiking to the one of the sacred caves, and made offerings to I'itoli, Great Spirit of the Tohono O'odham. We stand with you all! This border racist apartheid Israeli-made wall will never be!!