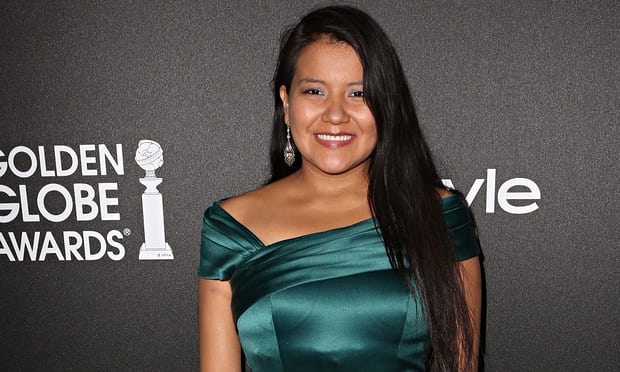 (UPDATE January 13, 2019) -- The father of murdered Blackfeet actress Misty Upham said evidence was stolen in the case of the rape of his daughter by a Weinstein executive.
Censored News asked Charles whether the family is involved in any of the ongoing lawsuits against Weinstein and Company.
Upham said, "Not at this time. We were approached by a legal firm in a class action law suit against Weinstein and Co. But they were interested in a particular dress that Misty kept that had incriminating DNA on it. This evidence would have bolstered their case but the dress was stolen from our storage unit in Los Angeles."
"We think Weinstein and Co had something to do with the theft but we can't prove it."
Charles said, "Misty's ordeal was not given much attention. Except for a brief reference by Ellen Page, the rape of my daughter by a Weinstein executive was never acknowledged by the MeToo movement."
"There are many indigenous women who experienced sexual predation but are invisible in today's society. Faceless, nameless victims abound and will never find justice. Thank you for your voice. Raising awareness is the best remedy for victims and the best tool to detour these crimes."

Previous article at Censored News(Feb. 12, 2018) The New York Attorney General has filed a civil rights lawsuit against the Weinstein Company, to ensure victims of sexual assault will be compensated -- and sexual predators will not.

Charles Upham, father of Blackfeet actress Misty Upham, said she was raped by a Weinstein executive before she was found dead.
Charles Upham said Misty was raped at the Golden Globes in 2013, but feared the power of Harvey Weinstein. Misty was found dead at the bottom of a ravine on Muckleshoot land in Washington State, after being missing for 11 days in October of 2014.
Charles Upham wrote on Facebook:
"My daughter, Misty Upham, was a victim of rape by a Weinstein Executive in 2013 at the Golden Globe Awards. The rapist forced her into the men’s room and had his way while other men in formal wear cheered him on as if he were chugging a beer in a contest. As Misty made the walk of shame back to the event, the Exec was given high fives, bragging rights and another notch in his Weinstein Co. belt. What should have been an auspicious occasion for Misty turned into a nightmare of pain, humiliation, fear and anxiety? Her mom and I pleaded with her to press charges since she still has the torn green dress she wore (Photo Above) with the DNA all over it. Misty was afraid to pursue charges because she knew Harvey Weinstein could protect his constituency and ruin her existence. Misty’s experience with Harvey Weinstein left her with the impression that he was a powerful man with many influential connections and could make people disappear. Once while riding in a limo with Quentin Tarantino, Harvey Weinstein and his assistant, somewhere between Salt Lake City and Park City, Utah, the assistant interrupted Weinstein and Tarantino’s conversation in a matter of urgent business; at which point Harvey Weinstein ordered the driver to stop and subsequently kicked his assistant out of the car in the middle of no where during a snow storm amidst subzero temperatures. Misty commented, “What if he freezes to death?” Weinstein retorted “ Somebody will come along and pick him up!” How could anyone expect a sincere investigation when the Weinstein’s company commander and chief is also a perpetrator? Misty said to me 'Dad, every time a rape victim comes forward to get justice they become the cause of the matter!'"
Charles Upham's statement:
https://www.facebook.com/charles.upham.9/posts/10208399015972554
Born in 1982 in Kalispell, Montana, Misty was nominated for an Independent Spirit Award for her role in Frozen River.
Misty's acting career included her role in August: Osage County.

Four Month Investigation Reveals New and Egregious Examples of Sexual Misconduct By Harvey Weinstein and Repeated Violations of New York Law By Company Officials That Endangered Employees
AG’s Lawsuit Alleges Company Executives and Board Repeatedly Failed to Protect Employees From Then-CEO Harvey Weinstein’s Unrelenting Sexual Harassment, Intimidation, and Discrimination
AG Files Lawsuit to Ensure Victims Will Be Compensated, Employees Will Be Protected Moving Forward, and Parties Responsible For Egregious Misconduct Will Not Be Newly Empowered As Part of Any Future Sale
NEW YORK – New York Attorney General Eric T. Schneiderman today filed suit against The Weinstein Company (“TWC”), Harvey Weinstein, and Robert Weinstein for egregious violations of New York’s civil rights, human rights, and business laws. The suit, filed today in New York County Supreme Court, includes new and extensive allegations about longtime company CEO Harvey Weinstein’s (“HW”) vicious and exploitative mistreatment of company employees. Today’s suit includes numerous employee-victim accounts of sexual harassment, intimidation, and other misconduct.
According to the Attorney General’s (“OAG”) lawsuit, despite many complaints to TWC’s human resources department and widespread knowledge across the company’s leadership of HW’s persistent misconduct, TWC executives and the Board repeatedly failed to take meaningful steps to protect company employees or curb HW’s misconduct.
“As alleged in our complaint, The Weinstein Company repeatedly broke New York law by failing to protect its employees from pervasive sexual harassment, intimidation, and discrimination,” said Attorney General Schneiderman. “Any sale of The Weinstein Company must ensure that victims will be compensated, employees will be protected going forward, and that neither perpetrators nor enablers will be unjustly enriched. Every New Yorker has a right to a workplace free of sexual harassment, intimidation, and fear.”
Today’s lawsuit is the result of an ongoing four month investigation by the Office of the Attorney General (“OAG”). The investigation included interviews with multiple company employees, executives, and survivors of Harvey Weinstein’s sexual misconduct. The investigation also included an exhaustive review of company records and emails.
Specific examples of HW’s harassment, intimidation, assault, and a hostile work environment alleged in the complaint include, among many others:
Specific allegations of misconduct by company management include, among others:
As detailed above, according to OAG’s investigation, none of the voluminous complaints filed with TWC Human Resources resulted in meaningful investigation or relief for victims, or consequences for HW. Instead, TWC Human Resources variously claimed there was “nothing” that could be done to address the misconduct; immediately informed HW of the complaint, thereby facilitating retaliation by HW against the complainant; or helped facilitate swift departure of the complainant from the company in connection with a settlement that contained an NDA at the direction of the HR Director’s superiors.
TWC’s culture of harassment and intimidation remained shrouded in secrecy because of HW’s and TWC’s practice of securing silence through Non-Disclosure Agreements (“NDAs”) that prohibited individuals from speaking about their experiences at TWC. In October 2017, Attorney General Schneiderman opened an investigation after initial reports regarding HW – using the Attorney General’s investigative authorities, including investigative subpoena power, to begin removing that shroud of secrecy.
While the Attorney General’s investigation remains ongoing, OAG is bringing suit today to seek court intervention in light of its investigative findings to date and the reported imminent sale of TWC – which OAG has a substantive basis to believe would leave victims without adequate redress, including a lack of a sufficient victims compensation fund. OAG also believes that the proposed terms of the sale would allow the perpetrators or enablers of the misconduct to see a windfall, and allow top officials at TWC who share responsibility for the misconduct to serve in executive positions of the new entity – where they would again oversee the adjudication of HR complaints, including those of sexual harassment, intimidation, and assault.
Those who believe they were victims of or witnesses to the misconduct described in the complaint should call the Civil Rights Bureau hotline at 212-416-8250 or Civil.Rights@ag.ny.gov.
The Civil Rights Bureau of the New York State Attorney General’s Office is committed to combating gender discrimination and sexual harassment faced by women across all industries. The Civil Rights Bureau encourages those who encounter such conduct to contact the office at 212-416-8250 or Civil.Rights@ag.ny.gov.
This case is being handled by Howard Master, Senior Enforcement Counsel, and by Anjana Samant, Assistant Attorney General, and Amanda Addision, volunteer Assistant Attorney General, in the Civil Rights Bureau and Investigator Lina Burgos. Lourdes Rosado is the Chief of the Civil Rights Bureau. The Civil Rights Bureau is part of the Division of Social Justice, which is led by Executive Deputy Attorney General Matthew Colangelo.
at February 12, 2018