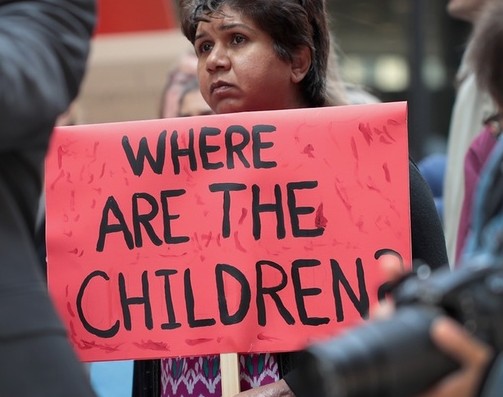 Community Responds to Driscoll’s
Criminalization and Separation of Migrant Families
Sheriff Driscoll continues to cooperate with ICE by choice, after lawsuit determines no obligation
What: Day of Action to Expose Sheriff Driscoll, Donald Trump, and Jeff Sessions’s Criminalization Tactics toward Migrant Communities Who: Repeal Coalition, Flagstaff Community Coalition, Migrant Communities and Allies
When:  Tuesday, September 18, 2018; 5:00PM - 7:00 PM
Where:  City Hall Lawn, Flagstaff, Arizona
Flagstaff, Arizona --  Images of children in prisons at the border and stories of family separation by ICE and Border Patrol agents have become nationwide news in recent months. However, these cases of injustice are not isolated to only the border region; they happen within the city limits of Flagstaff, Arizona. Family separation occurs when our Coconino County Sheriff, Jim Driscoll, collaborates with ICE officials. Even though a recent court ruling declared that Driscoll has no obligation to work with ICE, he is actively choosing to partake in separating immigrant families in our community. Driscoll has a choice, and he is choosing to stand on the side of racist policies and racial profiling. We demand that Driscoll stop facilitating the deportation of Flagstaff community members, and that our city and county officials adopt policies and practices that keep families free and together. We call upon these officials to provide transparency regarding their relationships with ICE and the deportation process, and to open avenues for the public to help create policies that do not racially profile, separate families, or require immigrants to endure a double-punishment system. Every person has the right to live, love and work freely wherever they please.
#ICEoutofflagstaff #ICEfueradeflagstaff #Driscollhasachoice #abolishICEAZ
Join us Tuesday, September 18th at 5:00 p.m. at Flagstaff City Hall as the community rallies to demand the end to Sheriff Driscoll’s cooperation with ICE and FPD’s complicity with ICE, and demand that our City Council and County officials protect our community.
###
www.facebook.com/RepealCoalitionAZ
Repeal Coalition is a community collective that firmly believes every human being
deserves a right to live, love and work wherever and whomever they please. Our work is done with, not for, the communities directly affected by unjust policies.
https://www.facebook.com/FlagstaffFreedomCity
Flagstaff Community Coalition is a coalition of community members from
various organizations and communities in Northern Arizona working to cultivate
an intersectional freedom city/sanctuary city movement in Flagstaff.