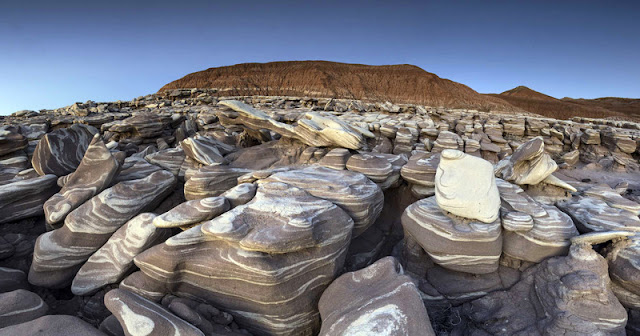 PHOENIX— The Bureau of Land Management today plans to auction off 4,200 acres of public land for oil and gas leases in northern Arizona near Petrified Forest National Park and two rivers. Parcels that do not receive bids today will be available for noncompetitive leasing for two years.The sale will put the land at risk of chemical spills and water contamination that could harm the Little Colorado River and Silver Creek, threatening endangered species and water users.
“It’s appalling that the Trump administration would consider this reckless plan that puts Arizonans and wildlife at risk,” said Taylor McKinnon, a public lands campaigner at the Center for Biological Diversity. “Public health, precious water and wild places shouldn’t be sacrificed for corporate profits.”“Accidents are inevitable, and if these leases go through, water could be contaminated and local communities could be harmed,” said Lisa Test with NoFrackingAZ. “As children, we are taught to look both ways before we cross the street. Why then is BLM pushing these leases without first assessing the dangers ahead?”The sale today is a part of a Trump administration policy issued in January that requires the BLM — the agency in charge of oil and gas leasing — to offer industry-nominated parcels for lease.Additionally, under this new policy, the BLM is foregoing legally required analysis of any potential harm to land and water, skipping tribal consultations, and deferring all environmental analysis until the drilling stage, after development rights are sold to industry. Groups sued to block the policy in July.“By skipping environmental reviews, the BLM is opening the door for corporations that could inflict lasting damage on the water that we depend on,” said Monte Cunningham of the Kerr-Cole Sustainable Living Center.“What we don’t know can hurt us, which is why it is critically important to evaluate impacts and any potential harm prior to moving forward with these leases,” said Sandy Bahr, chapter director for Sierra Club’s Grand Canyon Chapter. “The public has a right to know what harm may be caused early on and to have the opportunity to speak up against it and for iconic places such as Petrified Forest National Park.”Driven by high helium prices, companies are targeting the Holbrook Basin for helium, oil and gas development. State permits for helium fracking in the area show that companies will inject acid and other chemicals to help fracture rock layers 150 feet above the Coconino aquifer, a critical regional water source.“Our precious aquifer, which just about everyone depends on, is largely unprotected and at real risk of both unmonitored fracking contamination and significant down drafting,” said Tony Tangalos, a resident of Taylor, Ariz. “Those risks and this lease sale are unacceptable and unconscionable.” More than 80,000 people have sent letters opposing the lease sale, including U.S. Representative Tom O’Halleran (D-Ariz.). Residents of Navajo and Apache counties formed a new organization, NoFrackingAZ, opposing the plan with more than 2,000 local signatures. Formal administrative protests from 158 locals and several conservation groups also urged the BLM to cancel the sale.“We are outraged by this administration’s continued pandering to big business,” said Eleanor Bravo with Food & Water Watch. “These irresponsible practices will cause grave and irrevocable damage to our precious natural resources and public lands. We call for an immediate halt to this dangerous and irresponsible leasing.”“Trump and Zinke are once again putting our most valued public lands at risk by proposing to frack near Petrified Forest National Park,” said Becca Fischer, a climate guardian with WildEarth Guardians. “This lease-anywhere approach is the hallmark of an administration that will do anything for the oil and gas industry at expense of the American people. We deserve better.”“Unless everyday people stand up and say ‘no’ to these proposed sales, Arizona’s wildlife, water and families are not safe from the oil and gas industry’s desire to drill and frack every place it can,” said Kelly Fuller, energy campaign coordinator for Western Watersheds Project.The lands in today’s auction straddle the Little Colorado River and Silver Creek, home to two federally threatened species — the Little Colorado spinedace, a silvery minnow-like fish, and the yellow-billed cuckoo, a bird known for its distinctive call. Petrified Forest National ParkPetrified Forest National Park. Photo by Andrew Kearns, National Park Service. This image is available for media use. The Center for Biological Diversity is a national, nonprofit conservation organization with more than 1.6 million members and online activists dedicated to the protection of endangered species and wild places.Founded in 1892, the Sierra Club is a national nonprofit environmental organization with approximately 3.5 million members and supporters, including in Arizona. Sierra Club’s mission is to explore, enjoy, and protect the wild places of the earth; to practice and promote the responsible use of the earth’s ecosystems and resources; and to educate and enlist humanity to protect and restore the quality of the natural and human environment.
at September 17, 2018

What the hell is he thinking. Just continues to show what a fool he is.

Preserve our countries natural treasures. Don't sell them out to private interests to destroy!

Stop raping our treasures for profit! This is not what I want as a tax payer.

Preserve our countries natural treasures. Don't sell them out to private interests to destroy!

What's the advantage here? Please explain why this is a good idea!. How do we stop this?

That orange thing needs to go. Send him and all his cronies to Siberia, or worst

This man is all about the money & the power he thinks he has. How much MORE are we going to let him get away with this kind of crap! I have been to the Petrified forest & other beautiful places made by God. I would like to know how the Navajo Nation truly feels about this man. I will never call him an American, let alone our president! Unreal!!!!!