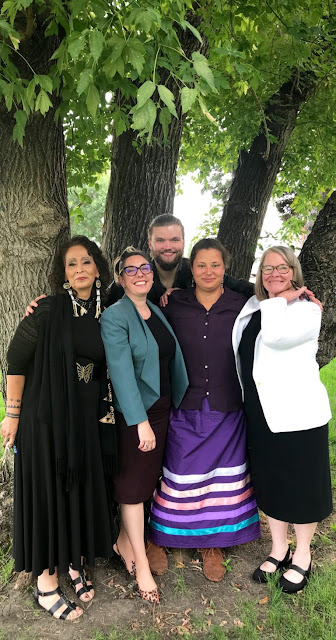 North Dakota Supreme Court District Judge John W. Grinsteiner dismissed misdemeanor charges of Engaging in a Riot and Criminal Trespass and entered a Judgement of Dismissal for Water Protectors Christina Rogers and Andrew Weber, arrested during the forced removal of Last Child Camp on February 1, 2017. A judgment of acquittal under Rule 29 of the North Dakota Rules of Criminal Procedure is warranted when the state fails to present evidence sufficient to sustain a conviction.Rogers was represented by WPLC volunteer attorney Patricia Handlin, and  Weber was represented by WPLC staff attorney Moira Meltzer-Cohen. Both attorneys vigorously cross-examined the state’s witnesses, three law enforcement officers who were involved in policing and making arrests that day, but none of whom actually arrested either Rogers or Weber. None of the state’s witnesses could give testimony as to any conduct of the defendants, nor did the state present any video or other documentary evidence that suggested that either Rogers or Weber had engaged in any unlawful activity.“In most places the state would not have proceeded with charges like these,” Handlin said. “We’ve had to fight every case, and we’ve won most of them in part because we’re diligent and good at what we do, but also because the cases themselves should never have been brought: there weren’t any riots at Last Child Camp.”The state admitted into evidence an hour-long video that clearly showed the Water Protectors circling a sacred fire, praying, singing, and linking arms. Conspicuously absent from the video were acts of violence or tumultuousness on the part of Water Protectors. In order to prove that an individual is guilty of engaging in a riot, the state must show that they participated in acts that were both violent and tumultuous. The only acts of violence in evidence appeared on the video when police struck the Water Protectors to make them let go of each other so they could be arrested and cuffed.“The video speaks for itself,” the judge stated.Meltzer-Cohen views the state’s argument with respect to the riot charge as “the apex of an abusive discourse.” In essence, she says, the government argued that the Water Protectors brought police violence on themselves by remaining in their prayerful stance — “It’s like an abuser saying to the victim ‘You made me hit you.’”“The theory of the prosecution in this case, that Water Protectors are responsible for the violence that was enacted upon them by law enforcement during their arrest is profoundly troubling. Its absurdity would make Kafka swallow his own tongue,” Meltzer-Cohen said. “I very much appreciate that Judge Grinsteiner would have none of it.”Rogers, who is Ojibwe and Potowatomi, went to Standing Rock to become a Water Protector after the death of her infant daughter. Her arrest at Last Child Camp was her first ever.“I was face to face with an officer,” she said, “and I told him that I had swum in a river full of tar sands oil, and maybe that’s why my baby was born sick. I knew I was going to jail for a right reason.”The details of being taken to jail will stay with her forever.“It was a cold day,” she recalled, “and the transport buses taking us to jail cranked on the a.c. and had the windows open. The drivers took the long way around; they didn’t have to, but they did. We were in zip ties, our hands placed behind us.” Rogers further described a number of indignities suffered by the women in her transport van, who were denied access to basic necessities in a campaign of humiliation and physical distress.Rogers and Weber were arrested at the same time. “Within the arrest,” Weber remembered, “the officer yelled ‘You either come with us now or you go into the fire.’ … they started pushing us into the flames; they punched me in the face, and kicked my leg. For the rest of my life I will always remember that I Iooked into these men’s eyes and saw death. They wanted to kill us; and some of the other officers, were just in tears, like they couldn’t handle it—good people in a bad situation.”LaDonna Brave Bull Allard was prepared to testify for the defense. Though she often sits in the back of the courtroom in support of Water Protectors and WPLC attorneys, this was the first time she was scheduled to offer testimony.“I have been waiting for someone to ask me about jurisdictions, where the lines are,” she said. “I grew up on the Cannonball River. As a young person I could ride my horse to Fort Rice, it was never trespassing; that is not how we lived on the river.”About the Water Protectors themselves and the attorneys who defend them, she said: “I can never thank them enough, never appreciate them enough, or give them enough love. To see them smiling when their cases are dropped, it is the greatest joy ever.”