Mohawk Nation News 'Who's the Migrant?' 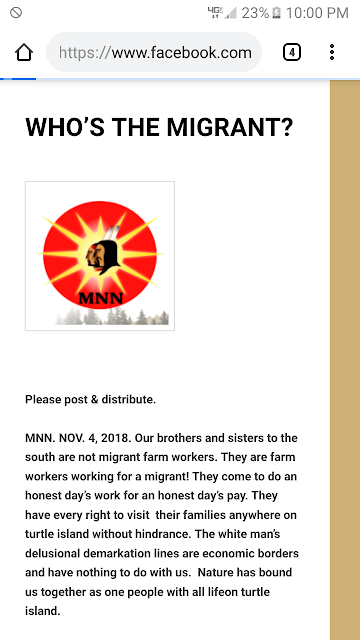 Mohawks ready to greet asylum seekers at border, and walk with them across borders. Mohawks live in New York State and Canada. Read more at Mohawk Nation News.
.http://mohawknationnews.com/blog/2018/11/04/whos-the-migrant/?fbclid=IwAR2xgdBdOqTJ2RmwQ90kovLrHD3cwB6ZdQmGKlCa-d7Cijzb0ZKYalRmWyU 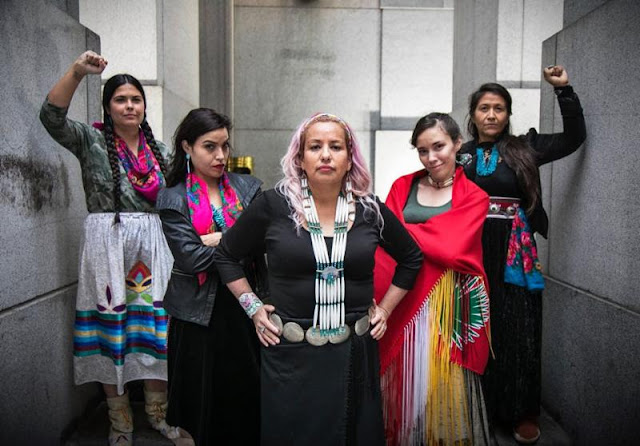 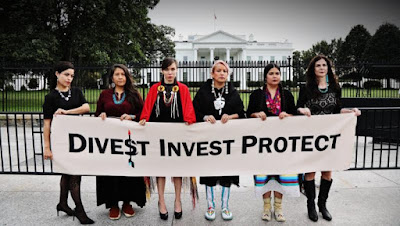 Please post & distribute.
MNN. Nov. 3, 2018. te-ka-ri-wa-iena-wakon. Calling all onkwehonweh, brothers, sisters, friends, allies, our families, young people and elders.
Come and learn. Let’s talk about the kaianerekowa, great peace and the tekeni teohateh [two row]. Let us open our minds so that together we can have mutual understanding. Let’s talk about unity and human rights.
Read article at MNN
http://mohawknationnews.com/blog/2018/11/03/grand-oswego-unity-gathering-nov-19-23-18/

StrongHearts Native Helpline Receives Its 1,000th Call from Those Affected by Domestic Violence and Dating Violence Across Indian Country and Alaska 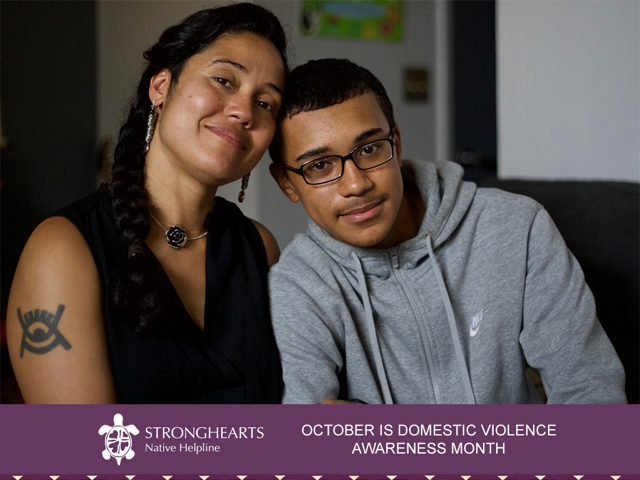 AUSTIN, Texas (October 5, 2018) – In time for Domestic Violence Awareness Month, the StrongHearts Native Helpline (1-844-7NATIVE) announced 1,000 callers have now reached out to the helpline for safe, confidential support and resources for domestic violence and dating violence, shining a light on the deep-rooted issues of violence plaguing Tribal communities across the United States.

Since March 2017, the StrongHearts Native Helpline has offered a culturally-appropriate space for victims, survivors, their families and friends, service providers and abusive partners to reach out for help. As a partnered effort, StrongHearts combines the technology and infrastructure of the National Domestic Violence Hotline with the National Indigenous Women’s Resource Center’s policy and programmatic expertise and community connections.

“This is a key milestone in our work to support those facing intimate partner violence, though we recognize these calls are only beginning to scratch the surface of violence in Tribal communities,” said StrongHearts Assistant Director Lori Jump (Sault Ste. Marie Tribe of Chippewa Indians). “Every call speaks to the bravery of our people in breaking the silence of violence in our homes, families and communities. For those reaching out to StrongHearts, we hear you, and we are here for you, no matter what.”

Steeped in Native cultures and traditions, advocates navigate each caller’s abuse situation with safety, compassion and respect. Created by and for Native American communities, StrongHearts is uniquely designed to serve a population facing some of the highest rates of domestic violence in the United States. Tribes, even as sovereign nations, face significant jurisdictional hurdles when addressing domestic violence in their communities. Gaps in culturally-based supportive services create unique barriers for Native victims seeking help.

According to StrongHearts’ data from its first 19 months of operations, the severity of victims’ experiences is telling: more than 7 out of 10 victim-survivor callers reported experiencing more than one type of abuse (71%), including physical abuse, emotional abuse, sexual abuse, financial abuse, digital abuse, cultural abuse, and other complex situations. Nearly half of callers experiencing violence reported a child being involved in their situation (46%). The top service referral requested by victim-survivors were shelters and legal advocacy.

“Because more than four in five Native Americans experience violence in their lifetime, there is a clear need for a national, confidential and tailored resource like StrongHearts to support Native victims,” said Jump. “However, we cannot do this work without the help of our relatives; every call to the helpline speaks to the need for more resources for tribally-run services for victims in Indian Country and Alaska Native communities.”

“Our advocates take calls from victims, survivors, family members and friends, service providers, youth and elders—anyone who is impacted by violence and needs help,” said Jump. “Domestic violence affects everyone in our communities and each generation. We encourage anyone who needs to talk to reach out to us. Every story matters.”
About StrongHearts Native Helpline

Created by and built to serve tribal communities across the United States, the StrongHearts Native Helpline, a project of the National Indigenous Women’s Resource Center, the National Domestic Violence Hotline, and the Family Violence Prevention and Services Program, is a culturally-appropriate, anonymous, confidential and no-cost service dedicated to serving Native American survivors of domestic violence and dating violence, along with their concerned family members and friends. By dialing 1-844-7NATIVE (1-844-762-8483) Monday through Friday from 9 a.m. to 5:30 p.m. CST, callers can connect at no cost, one-on-one with knowledgeable StrongHearts advocates who can provide lifesaving tools and immediate support to enable survivors to find safety and live lives free of abuse. After hours callers may connect with the National Domestic Violence Hotline or call back the next business day. Learn more about StrongHearts at www.strongheartshelpline.org.