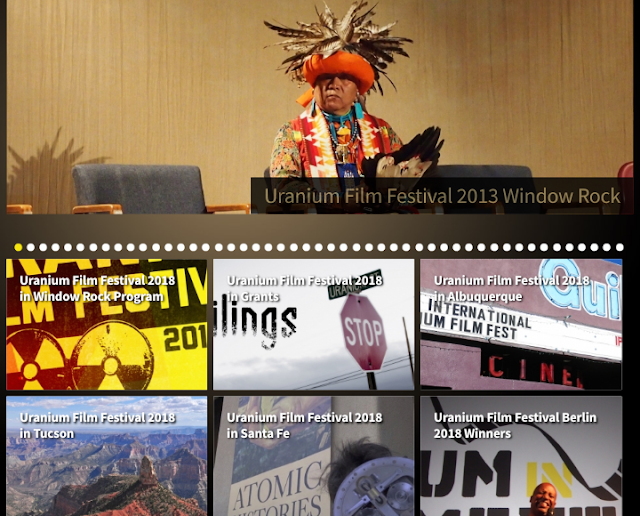 "It is through the courage of independent film makers that the horrid truth of the Nuclear Beast is exposed and denounced", states Anna Rondon, uranium legacy activist, member of the Diné Nation, Executive Director of the New Mexico Social Justice Equity Institute and one of the co-producers of the International Uranium Film Festival.

The International Uranium Film Festival returns to the Diné Nation, with additional screenings throughout New Mexico and Arizona, from Thursday, November 29th through Wednesday, December 12th  An Awards Ceremony will be held on Saturday, December 1st in Window Rock.  All showings are free and open to the public. Donations will be accepted to support the costs of production.
In a time of escalating nuclear threats, the Festival provides a visual resource to explore the consequences of nuclear power and nuclear weapons that have left deep scars on the peoples and lands of the Southwest. The Nuclear Fuel Chain - from uranium mining and milling to nuclear testing and waste disposal - will be addressed in the wide range of films representing more than 10 countries.

"Los Alamos, the birthplace of the Atomic Bomb maintains its culture of secrecy, a practice which began with the inception of the Manhattan project. The films we bring to the public help to break the bubble of secrecy which the US government and multi-billon dollar corporations continue to operate under, hiding the truth about harm the nuclear industry causes to our land, water, people, communities and all living beings", states Rondon.

Several international filmmakers will attend the Festival and take part in Round Table Discussions and panels with local community members.

For a complete list of films selected and additional activities scheduled, visit: www.uraniumfilmfestival.org

Keep Uranium In The Ground!