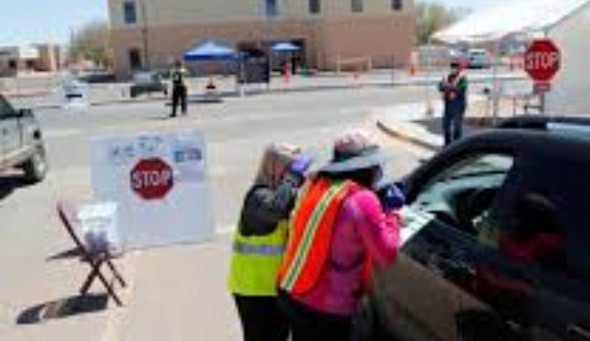 Navajo President Jonathan Nez said Friday that the Pfizer BioNTech COVID-19 study will be administered by the Johns Hopkins Center for American Indian Health in Chinle, Arizona, and in Shiprock, New Mexico, on the Navajo Nation and in Gallup, New Mexico.

Johns Hopkins University was responsible for infecting Indigenous Peoples in Guatemala with sexually transmitted diseases during its secret medical research in the 1940s. It took decades for the truth to be exposed and the matter is now before the U.S. courts.

It was not widely known that Johns Hopkins already received funding for experimental plasma infusions on Navajos.

Johns Hopkins announced in July that it received $35 million to carry out experimental plasma infusions on Navajos. The plasma is from those who recovered from the virus. This was not widely publicized in Indian country media. Read article.

Medical researchers and drug profiteers have a long history of targeting vulnerable people, including those who do not speak English, and the elderly, who may not understand what they are agreeing to.

This is especially true in the Indian Health Service facilities, operated by the U.S. government and located on Native American Nations. The risks associated with experimental vaccines may not be fully explained.

This is not the first time that drug companies and researchers have targeted Navajos.

In 1993, an attempt was made to pressure the Navajo Nation Council to stockpile Ribavirin during the hantavirus outbreak. Navajo Councilwoman Genevieve Jackson halted the stockpile attempt.

It exposed the revolving door of Congressional lobbyists, politicians and drug companies.

The Indian Health Service has a long history of violating patients' rights and is responsible for sterilizing Native American women against their will during the 20th Century.

Currently, the Navajo Nation government and Navajo Area IHS are following the pattern being pushed by the Trump administration.

Trump is pushing for less testing, so the number of new coronavirus cases appears low. Trump is also pushing for a rushed vaccine before the election. Navajo Vice President Myron Lizer publically joined the Trump campaign and voiced his support for Trump.

Currently, there are more than 2,000 Navajos with coronavirus who have not recovered, according to the Navajo Nation. Since March, 530 Navajos have died from the virus.

Medical experts point out that the risks in the Pfizer BioNTech vaccine, now approved for use on Navajos, include the side effects of fever and chills. There is the danger that the vaccine could actually enhance disease.
Read article.

Meanwhile, another coronavirus vaccine experiment, AstraZeneca, was abruptly halted last week after one participant developed a spinal infection. It reveals the high risk of experimental vaccines.

The public relations spin by the Navajo government has not revealed the facts.

Navajos remain desperate for help, regardless of millions of dollars in virus relief received by the tribal government.

The Navajo government has no uniform home delivery of food and water to Navajos sent home by the hospitals and told to quarantine.

There is no visiting home health care for the dying. There has been no uniform delivery of food and water to the homes of the elderly during the lockdowns.

Many Navajo tribal chapter houses have been closed or have limited hours. These are normally sources of local tribal government assistance. The chapter house in Tohatchi, New Mexico, posted a sign on its door that it would call the police on Navajos who keep asking for help. It is one of 110 Navajo chapters in Arizona, New Mexico and Utah. Navajos report that utilities and water costs are staggering on the Navajo Nation. About 30 percent of Navajos do not have running water and are forced to haul water.

The Navajo Nation received $714 million in federal CARES Act emergency relief more than three months ago -- but the most desperate Navajos continue to plead for help.

The Navajo government made casinos a priority, immediately giving $32 million of the CARES Act virus relief funds to its casinos.

As for the vaccine experiments, the Navajo Nation Human Research Review Board approved the use of Navajos in the Pfizer vaccine experiments. The approval then was discussed before a Navajo Council committee. It was then recommended by Navajo President Jonathan Nez and Vice President Myron Lizer. The review board members appear below.

(2.) Is this a double-blind study, will some participants be given placebos or other medications instead of the vaccine without being told? Will participants be told exactly what they are being given and what the risks are?

(3) Has this vaccine been tested on humans? Have there been any adverse results?

(4) Will IHS hospitals be used as the sites of vaccine experiments by Johns Hopkins researchers? Is IHS a partner in this vaccine experiment? Is IHS liable for any sickness, disability or death that results from the vaccine?

WINDOW ROCK, Ariz. – Navajo Nation President Jonathan Nez and Vice President Myron Lizer recently received a report from the Navajo Department of Health, indicating that the Navajo Nation Human Research Review Board approved the Pfizer COVID-19 Vaccine Study, led by the Johns Hopkins Center for American Indian Health, to be conducted at several health care centers on the Navajo Nation on a patient-volunteer basis.
“Several COVID-19 vaccine clinical trials are making progress across the U.S. and it’s important that the Navajo people have an opportunity to participate in a Phase 3 trial. The clinical trials will be done on a patient-volunteer basis, meaning that no one will be forced to participate unless they are fully willing to do so. We have many people whose family members are in hospitals fighting to recover from COVID-19 and they may want to participate in the vaccine trial. Please remember that the vaccine trials have been conducted on many people outside of our Nation already, so this is now the third phase of the trial. A vaccine is needed to end the pandemic,” said President Nez.
Currently, there are no licensed vaccines to prevent COVID-19, however, several are in development. The Pfizer COVID-19 Vaccine Study will be the first COVID-19 vaccine study on the Navajo Nation and will be administered by the John Hopkins Center for American Indian Health. Enrollment of participation will include individuals between the age of 18 to 85 years, who are healthy or have stable underlying health conditions. Enrollment will begin mid-September and participation is voluntary. Participants will receive two doses of approved vaccine and will have be monitored over a two years period. To be eligible to join the study, a person cannot have had a prior COVID-19 infection. This is because people who have recovered from COVID-19 will likely already have antibodies.

The IHS report shows very little COVID-19 testing was carried out in the Navajo IHS Service Area during the month of August, 2020. 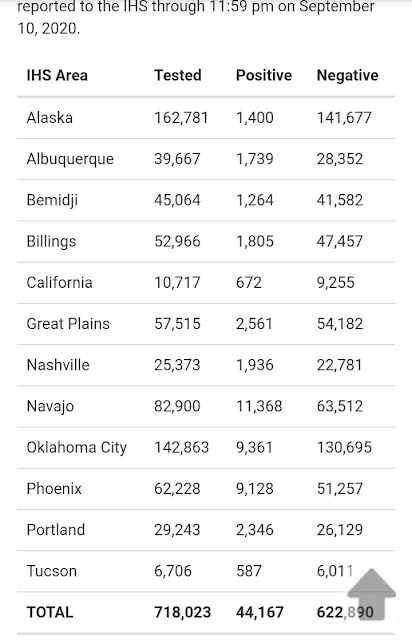 In this background article from 2019, it is revealed that Johns Hopkins University, its drug partner Bristol Myers and the Rockefeller Foundation, infected Indigenous in Guatemala with a sexually transmitted disease during medical research.
https://www.reuters.com/article/us-maryland-lawsuit-infections-idUSKCN1OY1N3

Brenda Norrell, the publisher of Censored News, began her career as a news reporter at Navajo Times, during the 18 years that she lived on the Navajo Nation. She was a stringer for AP and USA Today covering the Navajo Nation and federal courts. After serving as a longtime staff reporter for Indian Country Today in the Southwest, she was censored and terminated in 2006. She has been a journalist in Indian Country for 38 years and has a master's degree in international health.

Article copyright Brenda Norrell, Censored News, may not be republished without permission. Please share our link.
at September 15, 2020

This is concerning to say the least!!!
As you read this please know that this is in no way written to minimize the Indigenous peoples trauma that is being endured to this day. It is writing out of a true concern!

Something mentioned here—in this expos’e—is so important that it Needs to be addressed yesterday; It is the Compromised populations due to infrastructure/structural issues. This should be Priority ONE!
There needs to be disenchantment from what is being presented as a gift to the nations; A gift that is, in reality, a gift to the self-serving oligarch. *A blanket*.
The corporations will profit beyond imagination, leaving the community in no better condition than from the start; yet the industry will be armed with knowledge that will help them to profit in the billions of dollars.

There should also be discontentment from an understanding of how Indigenous peoples, around the world, know the ill effects of cultural supremacy. Just as the colonizers knew,the oligarch knows and understands the cultural effects of a 'sanctioned' “manifest destiny”.
This “history” of genocide is alive and well TODAY—throughout the world—this, not so distant history, is in the memory of not only the parents but also in their children's ancestral memory; their genetic memory. Undoubtedly this covid related “experiment” will have unforeseen consequences far into the future. There is a saying that goes something like—Those who cannot remember the past are condemned to repeat it.
What is sad here is not a single generation has passed without being subjected to some form of harm. Harm that was sanctioned by some form of “manifest destiny”. And yet here we are again—When I say here "We" are again I am referring to both the colonizers and the oppressed.

Question:
Where are the "Proud Americans''? Where are the hundreds of people who willingly attend mass gatherings—without minimal protection?—Where are those that attend things like the trump event at the desecrated Six Grandfathers and the annual Sturgis mass gatherings? Where are the College students attending crowded parties? Where are the Americans who attended the recent Colorado Springs church event? ...All intentionally disregarding science.
Simply asking Where are the “Proud Americans” should signal a warning. People of color are expendable, paying the price, while the colonizers have a given right to act with impunity.
Beware Be-aware Beware
In Solidarity
Neighbor
J.D. Ruybal