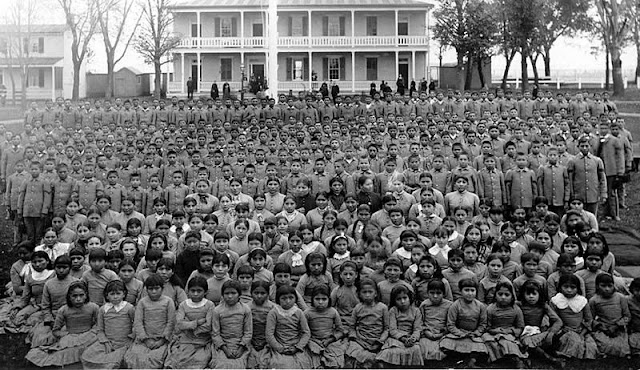 Carlisle Indian Industrial School in Penn. The United States kidnapped Native children and forced them
to give up their traditional ways, forcing on them English, Christianity, and U.S. militarism.

By StrongHearts Native Helpline
Censored News
The parallels that can be drawn between colonialism and domestic violence can be seen through their definitions and through a review of Native American history. Having lived through genocide and horrific suffering, the aftermath of European contact and colonization continues to not only haunt Native Americans, it wreaks havoc in their everyday lives.

Colonization is the act of domination involving the subjugation of one people to another. It’s the practice of gaining full or partial control over another country and its Indigenous peoples, occupying it with settlers, and exploiting it economically. In the process, colonizers impose their religion, economics and cultural practices on others. Simply put, this is Native American history in a nutshell.

Dine' College Assoc. Professor Christine M. Ami said, "I have been officially blocked from commenting on the Office of President and Vice President's site. This is an example of the censorship that our Navajo Nation government is perusing. I’m not being belligerent -- I am asking basic questions."
Ami raises the important ethical question of the medical researchers and drug companies offering money as an incentive in a population that is economically disadvantaged, especially when the vaccine risks are unknown.