Rainforest Rescue Co-Chair Marianne Klute: “While putting 30 percent of the planet under protection is tantalizing in its simplicity, it is a dangerously flawed concept. It assumes that nature can only be protected by keeping humans out. Displacing the local population for “30 by 30” would impact 300 million men, women and children, many of them Indigenous people.
"This would amount to evicting the most effective guardians of the rainforest in the name of conservation. Whether protected areas do anything for nature is questionable: Their number has skyrocketed, but biodiversity is still collapsing. Instead of falling back on outdated concepts like heavily guarded national parks, this conference must strengthen the rights of Indigenous people.”


Protected areas such as national parks are frequently based on the dated concept of “fortress conservation”, which calls for a strict separation of humans and protected nature. The “30 by 30” plan thus has the potential to be the biggest land grab in history, while doing little to protect biodiversity.
The petition calls on the 196 member states of the UN Convention on Biological Diversity (CBD) to drop their narrow focus on protected areas and instead strengthen the rights of indigenous people. Studies have shown that the environment is in a better state wherever Indigenous people are the stewards of the land.

The Executive Secretary of the Convention on Biological Diversity, Elizabeth Maruma Mrema, showed herself receptive to the arguments of the petition: she also sees Indigenous people as the true guardians of nature, who should be more strongly represented at conferences such as COP 15. “I would have liked to have seen more of them here,” she said.

In her view, the “30 by 30” plan must not be pursued in isolation, but only in conjunction with numerous other measures. Elizabeth Maruma Mrema agreed to highlight the dangers of a narrow focus on protected areas in the negotiations: “I will plant the seed,” she said.

The petition, which is also supported by 15 environmental and human rights organizations in Africa and Asia, is addressed to the United Nations, the state parties to the CBD and German Chancellor Olaf Scholz.

“The plan to establish protected areas on 30 percent of the planet without taking the traditional land rights of Indigenous people into account could destroy the relationship between conservation and nature. Evicting Indigenous people … destroys ecology,” notes Pacifique Mukumba of the Indigenous organization CAMV (DRC). 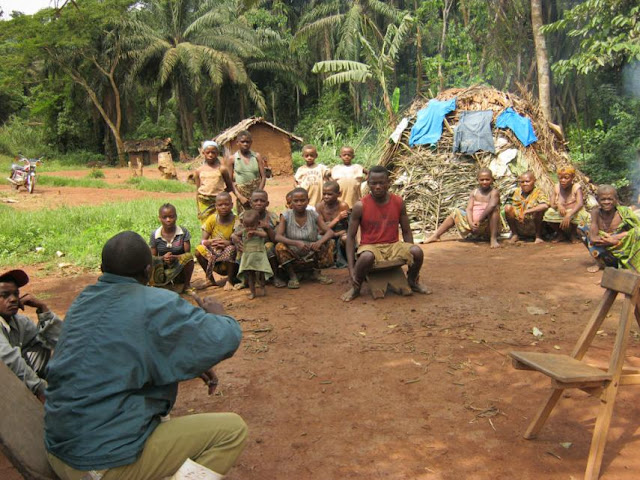 “The 30 by 30 proposal, if allowed, will spell disaster of the world’s remaining rainforest,” warns Dr. Martins Egot, Executive Director of Development Concern in Nigeria.

“When you study nature and biodiversity intensively, you see: Indigenous communities maintain traditional knowledge and practices that are very important for the sustainable use of biodiversity. This is something that the concept of putting 30 percent of the planet under protection seems to reject for political reasons,” says Maxwell Atuhura, Tasha Research Institute Africa (TASHA) Uganda.
“This future land grab must be stopped. In our country where the rural domain is not defined at all, such a project will push the indigenous populations and local communities into absolute precariousness. All I can say to this macabre project that it is absolutely necessary to fight,” says Ladislas Désiré Ndembet of the Cameroonian NGO Synaparcam.

“If this is implemented, the natives will lose the right to the forest that they have lived in for generations! Even “traditional” economies such as shifting agriculture or pastoral nomadism will no longer be accepted there,” notes Matek Geram of the Malaysian Indigenous organization SADIA.

The indigenous Penan live as nomads in and from the forest (© David Hiser/Alamy Stock Foto)
The threat to Gunung Mulu National Park in Malaysia from the palm oil industry has finally been averted – a great success for the indigenous peoples living there. After years of protests, the Sarawak state government has now revoked the concession for the plantation. Rainforest Rescue, 2022.
“Indigenous peoples have been living in harmony with nature for centuries. They are the guardians of many of the world’s remaining forests and biodiversity. Therefore, Indigenous peoples must be put at the center of any conservation plan including Protected Areas and OECMs. Respecting and protecting Indigenous Peoples rights and territories, their way of life, and ensuring their voices are heard in decision-making processes are some of the key steps to ensure the safeguarding of the world’s forests and biodiversity,” says Mardi Minangsari, Executive Director of the Indonesian organization Kaoem Telapak.

The UN conference will last until December 19. Rainforest Rescue will be present in Montréal, observing the negotiations for the duration of the conference.

---
Rainforest Rescue campaigner Mathias Rittgerott will be in Montréal for the duration of the conference and will be available for interviews in English and German.

The elite inheritors of colonizing, globalist economies – 600 years in the making – refuse to see that it is the unswerving hubris and mindset of “progress” and apex “development” that are central to the forces that continue to threaten the good health and good wealth of communities throughout the biosphere, even in their own “backyards”. The 30 by 30 proposal is just another misguided “solution” on the expressway – on the high-speed train – toward ecocide and extinction. Many aspects of “modern” knowledge and its application can be of great value, but not unless we are willing to reassess honestly, holistically, the true source of the problem.

Kudos to Rainforest Rescue and fellow resistance movements for sounding the alarm and raising critical questions.