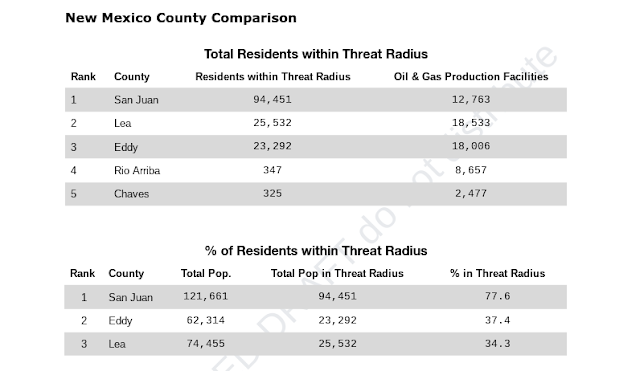 Carlsbad, NM - A new geospatial analysis released by Earthworks today shows 144,377 New Mexicans including 38,749 children, reside near or attend schools or daycares within a ½ mile threat radius of active oil and gas operations. In the San Juan Basin nearly 80% of the population lives within this radius. In the NM Permian Basin the map shows a nearly 40% increase in Eddy County alone of people living within the threat radius since 2017. This analysis comes as the U.S. Environmental Protection Agency (EPA) works to finalize their widely supported proposed safeguards to reduce greenhouse gas emissions and associated toxic air pollution from new and existing oil and gas facilities and as they prepare to introduce a supplemental rule to address routine flaring and smaller leak-prone wells. New Mexico's recently finalized methane and ozone precursor rules set a strong floor for federal rules that would protect all communities like those in Texas, where regulations are limited, and along its border in New Mexico.

By Brenda Norrell
Censored News
Watch video of the presentation
https://www.youtube.com/watch?v=JvnF_L1FUnQ
Watch the movie 'The Return of Navajo Boy'
https://vimeo.com/showcase/9450949/video/710843021
"The people could have still been alive," says Dine' Grandmother Elsie Begay as she describes how Dine' were never told about the dangers of radiation and uranium mining.
"This movie not only brought back my brother, but it is helping people," Begay said of the movie, 'Return of Navajo Boy.'
Dine' grandmother Elsie Begay, 83, of Monument Valley was honored with the Honorary Lifetime Achievement Award from the International Uranium Film Festival. Begay received her award in Dine' and English languages yesterday.
Read more »
at May 24, 2022 No comments: