Location of 28 Mass Graves at Residential Schools in Canada: Published in 2008


Mass Graves at former Indian Residential Schools and Hospitals across Canada
By Hidden from History
Published at Atlantic Free Press
Contributed by Brenda Norrell
April 15, 2008
Updated on Censored News January 2023
Trigger warning for content. This list of 28 mass graves of Native children who died of starvation, disease, torture, and murder, at residential schools in Canada was published in 2008.
The information was published by Hidden from History from historical data and survivor and eyewitness accounts. The children were stolen from their families by churches and government Indian agents. Parents who hid their children were to be imprisoned, by Canadian law.
Instead of being schools, these were militarized prison facilities where children were incarcerated and subjected routinely to beatings and abuse. -- Censored News.
Children to be asked in ceremony for permission to search for graves. Sept. 2021
https://www.cbc.ca/news/canada/sudbury/ceremony-residential-schools-ontario-1.6179800
A. British Columbia

St. Michael’s Anglican school (1878-1975), situated on Cormorant Island offshore from Port McNeill. Presently the building is used by Namgis First Nation. The site is an overgrown field adjacent to the building, and also under the foundations of the present new building, constructed during the 1960s. Skeletons seen “between the walls”.
3. Kuper Island: Catholic school

(1890-1975), offshore from Chemainus. The land occupied by Penelakut Band. The former building is destroyed except for a staircase. Two grave sites:  one immediately south of the former building, in a field containing a conventional cemetery; another at the west shoreline in a lagoon near the main dock.
Update July 13, 2021: 160 graves found at Kuper Island:
https://www.theguardian.com/global-development/2021/jul/13/canada-unmarked-graves-british-columbia-residential-school

5. Mission: St. Mary’s Catholic school (1861-1984), adjacent to and north of Lougheed Highway and Fraser River Heritage Park. Original school buildings are destroyed, but many foundations are visible on the grounds of the Park.

In this area there are two gravesites: a) immediately adjacent to former girls’ dormitory and present cemetery for priests, and a larger mass grave in an artificial earthen mound, north of the cemetery among overgrown foliage and blackberry bushes, and b) east of the old school grounds, on the hilly slopes next to the field leading to the newer school building which is presently used by the Sto:lo First Nation. Hill site is 150 metres west of the building.

11. Kamloops : Catholic school (1890-1978). Buildings are intact. Mass grave south of the school, adjacent to and amidst orchard. Numerous burials witnessed there.
Update June 2021: 215 remains located in mass grave at Kamloops.
Survivor said Kamloops was a labor camp, with sexual abuse of students by school staff at night. Radio interview KPFA 2021.
https://bsnorrell.blogspot.com/2021/06/aim-west-kpfa-radio-percy-casper.html
12. Lytton: St. George’s Anglican school (1901-1979). Graves of students flogged to death, and others, reported under floorboards and next to the playground.

(1910-1976), buildings destroyed. Graves reported under old foundations and between the walls.
Sterilizations, abortions and medical experiments 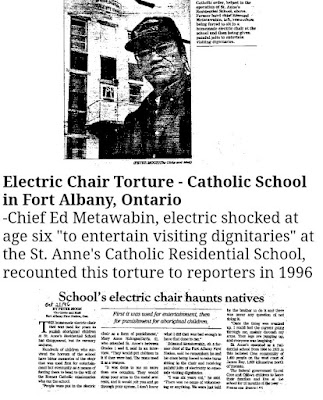 6. Brantford: Mohawk Institute, Anglican church (1850-1969), building intact. Series of graves in the orchard behind the school building, under rows of trees.

An indigenous nation in Canada said it has discovered evidence of possible unmarked graves on the grounds of a former residential school.

Star Blanket Cree Nation said a ground-penetrating radar had revealed the jawbone fragment of a small child and more than 2,000 "areas of interest".

Areas for this most recent search were identified after testimonials from elders and former students of the former Qu'Appelle Indian Residential School.
https://www.bbc.com/news/world-us-canada-64225855
Sources of list published in 2008 :

- Eyewitness accounts from survivors of these institutions, cataloged in Hidden from History: The Canadian Holocaust (2nd ed., 2005) by Kevin Annett. Other accounts are from local residents. See www.hiddenfromhistory.org
Documents and other material from the Department of Indian Affairs RG

- Survey data and physical evidence obtained from gravesites in Port Alberni, Mission, and other locations.

This is a partial list and does not include all of the gravesites connected to Indian residential schools and hospitals across Canada. In many cases, children who were dying of diseases were sent home to die by school and church officials, and the remains of other children who died at the school were incinerated in the residential school furnaces.

This information is submitted by The Friends and Relatives of the Disappeared (FRD) to the world media, the United Nations, and to the International Human Rights Tribunal into Genocide in Canada (IHRTGC). The IHRTGC will commence its investigations on

For more information on the independent inquiry into genocide in Canada being conducted by the IHRTGC, write to: genocidetribunal@yahoo.ca

Squamish Nation Territory ("Vancouver, Canada") - At a public ceremony and press conference held today outside the colonial "Indian Affairs" building in downtown Vancouver, the Friends and Relatives of the Disappeared (FRD) released a list of twenty-eight mass graves across Canada holding the remains of untold numbers of aboriginal children who died in Indian Residential Schools.

The list was distributed today to the world media and to United Nations agencies, as the first act of the newly-formed International Human Rights Tribunal into Genocide in Canada (IHRTGC), a non-governmental body established by indigenous elders.

In a statement read by FRD spokesperson Eagle Strong Voice, it was declared that the IHRTGC would commence its investigations on April 15, 2008, the fourth Annual Aboriginal Holocaust Memorial Day. This inquiry will involve international human rights observers from Guatemala and Cyprus and will convene aboriginal courts of justice where those persons and institutions responsible for the death and suffering of residential school children will be tried and sentenced. (The complete Statement and List of Mass Graves is reproduced below).

Eagle Strong Voice and IHRTGC elders will present the Mass Graves List at the United Nations on April 19 and will ask United Nations agencies to protect and monitor the mass graves as part of a genuine inquiry and judicial prosecution of those responsible for this Canadian Genocide.

Eyewitness Sylvester Greene spoke to the media at today's event and described how he helped bury a young Inuit boy at the United Church's Edmonton residential school in 1953.

"We were told never to tell anyone by Jim Ludford, the Principal, who got me and three other boys to bury him. But a lot more kids got buried all the time in that big grave next to the school."

We are gathered today to publicly disclose the location of twenty-eight mass graves of children who died in Indian Residential Schools across Canada, and to announce the formation of an independent, non-governmental inquiry into the death and disappearance of children in these schools.

We estimate that there are hundreds, and possibly thousands, of children buried in these gravesites alone.

The Catholic, Anglican and United Church, and the government of Canada, operated the schools and hospitals where these mass graves are located.

We, therefore, hold these institutions and their officers legally responsible and liable for the deaths of these children.

We have no confidence that the very institutions of church and state that are responsible for these deaths can conduct any kind of impartial or real inquiry into them. Accordingly, as of April 15, 2008, we are establishing an independent, non-governmental inquiry into the death and disappearance of Indian residential school children across Canada.

This inquiry shall be known as The International Human Rights Tribunal into Genocide in Canada (IHRTGC), and is established under the authority of the following hereditary chiefs, who shall serve as presiding judges of the Tribunal:

Today, we are releasing to this Tribunal and to the people of the world the enclosed information on the location of mass graves connected to Indian residential schools and hospitals in order to prevent the destruction of this crucial evidence by the Canadian government, the RCMP and the Anglican, Catholic and United Church of Canada.

We call upon indigenous people on the land where these graves are located to monitor and protect these sites vigilantly and prevent their destruction by occupational forces such as the RCMP and other government agencies.

Our Tribunal will commence on April 15 by gathering all of the evidence, including forensic remains, that is necessary to charge and indict those responsible for the deaths of the children buried therein.

Once these persons have been identified and detained, they will be tried and sentenced in indigenous courts of justice established by our Tribunal and under the authority of hereditary chiefs.

Issued by the Elders and Judges of the IHRTGC

Sponsors include The Friends and Relatives of the Disappeared, The Truth Commission into Genocide in Canada, the Defensoria Indigenia of Guatemala, Canadians for the Separation of Church and State, and a confederation of indigenous elders across Canada and Turtle Island
Issued on Squamish Territory, 10 April, 2008, under the authority of Hereditary Chief Kiapilano. For more information: www.hiddenfromhistory.org, or write to the IHRTGC at: genocidetribunal@yahoo.ca
at March 01, 2022

Thanks for this continued coverage. You know, the mainstream media can continue to mark the casualty count of European floods and the building collapse in Florida, both the result of historical "White Man" ecological thinking, or lack thereof. Meanwhile, the genocidal policies and actions of the Settler Culture gain some fresh media "exposure" with the help of technologically-enhanced investigations regarding grave sites at Indian Residential Schools. Fine. But again, as yours and other archived stories reveal and beg clarification from settler authorities, what about the oral testimony of Native Nation peoples, witnesses who have experienced and reported these crimes and abuses over the decades? Not good enough to warrant official inquiry? As if technological advancement is key to achieving human rights and dignity for indigenous people. In other words, a racist, colonialist bias never fails to seep through the seams of the dominant-culture's style of storytelling. To be sure, a difficult bias to unlearn, but a task that begins with self-awareness of settler fear, prejudice, and assumed ignorance. That said, human rights activists and indigenous communities must press mainstream and heritage news sources to pursue the Indian School revelations in full and in the spirit of once living lives lost, those of brothers and sisters, sons and daughters, and not simply as some historical moment for the perfunctory raising of social-consciousness among the settler communities. Most importantly, the leaders of the settler governments and their responsible agents in Canada and the United States must be held accountable for genocidal policies and/or the cover-up thereof in an International Court, the Indigenous Peoples Forum, or some other like recognized body. Official censure, at least! No crocodile tears or the wringing of hands, thank you. Canadian and American citizens must also take measure as complicit - constitutionally, by social contract – members of a so-called "of the, by the, for the people" democracy. Finally, let us hope – even if history often instructs us otherwise – that any investigation by Secretary Haaland goes forth bravely and without obstruction. Aho and check!