As a Native man, I was genuinely stunned to learn the US had selected the name of a hero who fought to defend his people and way of life. We've been reduced to caricatures as mascots and entertainment in sports and media. Our Identity as Native people has been confiscated and labeled as "Native Americans" or "American Indians". Then to associate one of our icons of resistance is an insult. I can't even begin to imagine the horror felt by Geronimo's descendants or his people, the Chiricahua Apache. They were branded as Americans in 1924 before they were pardoned as prisoners of war, ironically. 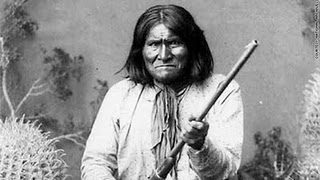 I felt a more appropriate name would have been "Custer" or "Columbus," both murderers, but this doesn't fit with their version of history. And you would think Obama, the president who campaigned for Native votes would have been more sensitive to this point when he said, "I'm on your side. I understand what it means to be an outsider. I know what it means to feel ignored and forgotten, and what it means to struggle. So you will not be forgotten as long as I'm in this White House,...". http://www.azcentral.com/arizonarepublic/news/articles/2009/11/06/20091106summit1106.html#ixzz1LElNcIbf

This society tends to marginalize the First Peoples of this land, so maybe this shouldn't be a surprise that the heroes of Native people are still regarded as terrorists by the military and they saw no problem in making the association to Geronimo. Some people may say that OBL's skill at evading capture was a tribute in memory of Geronimo! Let's do a reality check here, who would want to elevate OBL to a glorified level?
What I've seen since the use of this code-name was revealed is shock, disgust and outraged. Here's one of many posts on Facebook: "Geronimo was NO TERRORIST, HE WAS HUNTED DOWN BY THIS COUNTRY'S OWN FIRST TERRORIST!!!!TRUTHS HURT!!THIS IS THE TRUTH, i AM A NATIVE WOMAN VET OF THIS COUNTRY, IM INSULTED!!!!!"

If we want to have a look at terrorism, shouldn't we look at the history of the US? When the Oklahoma City bombing occurred, it was called the worst act of terrorism on US soil. I beg to differ, as Native people we suffered acts of terrorism at Sand Creek, Washita, Wounded Knee and the Trail of Tears and Death, etc., place-names that remain burned into our memories and sacred in our hearts, just as the site of the World Trade Center or the Oklahoma City National Memorial has been for so many people who lost loved ones in recent memory.

I believe the President and the US military owes the Apache people an apology and a sincere one at that.
at May 03, 2011

I agree! An apology is the least that should be done. But also any words used in a derogatory manner should not be permitted by anyone, especially the government. It is time for respect.

Thank you for your words of truth.

When I read the headline, my first thought was "yeah, they should have called the guy Custer, not Geronimo..."

I am a caucasian of French & English descent with no family or cultural ties to Geronimo or any other Native people, and *I* was totally offended by the use of his name.

Geronimo was a true hero to his people, not a terrorist like Bin Laden. I would like to think that, given the opportunity, Geronimo would have put a bullet through Bin Laden's forehead as well...

It is an insult to any civilized culture to give Bin Laden the name of a hero like Geronimo.

Somebody like Custer, now... who was not only not a hero but also a total idiot... that works for me.

When I read the headline, my first thought was "yeah, they should have called the guy Custer, not Geronimo..."

I am a caucasian of French & English descent with no family or cultural ties to Geronimo or any other Native people, and *I* was totally offended by the use of his name.

Geronimo was a true hero to his people, not a terrorist like Bin Laden. I would like to think that, given the opportunity, Geronimo would have put a bullet through Bin Laden's forehead as well...

It is an insult to any civilized culture to give Bin Laden the name of a hero like Geronimo.

Somebody like Custer, now... who was not only not a hero but also a total idiot... that works for me.

Like most people, it was good news that Bin Laden was no longer going to terrorize. However, I resented the code name they gave him. Yes, both men were elusive, but that is the only thing that was similiar between them. Bin Laden was a vial human being, and he just seemed to hate the United States. Geronimo was fighting for land and a way of life.

Message post from Uya on the border: "Indigenous peoples, remember that Bin Laden stood up against the United States Corporate machine to defend his ancestral homelands and way of life. He is a traditional person much like our ancestors that took up arms to defend our people and homelands. Did they find weapons of mass destruction? No. Did the United States start a oil war? Yes. Americanized indigenous don't believe the United States propaganda. Does America feel secure now, then remove the militarized Border wall and armed United States forces from off my homelands.
Prayers and Blessings to Osama bin Laden's extended family and homelands." Uya

Since I posted this yesterday, there has been an apparent spin to imply that this particular operation was code named "Geronimo", how ever the quote I led my blog with was taken from time magazine.
And before anyone becomes offended by Uya's comment, reposted by Brenda, do not forget that OBL was recruited by the CIA, trained, armed and provided intelligence info to combat others. What we don't know is if OBL might have been promised leadership of a country or anything else for his support. There is questions of his involvement with the twin towers being attacked and if US intelligence was aware of the pending attacks. We can split all the hairs we want, but we should always keep in mind that one mans freedom fighter is someone else's terrorist. Besides, we all know that we can trust the US government, right?

Geronimo fought for a way of life and homeland, just as his neighbors did North Central and South did true, but he did not preach for the destruction of another peoples way of life while he was eluding Mexico and US also Geronimo was human enough to think that him eluding was hurting his people at home and as a warrior Geronimo had meetings with US Officers and had discussions Warriors to Warriors.. Bin Laden on the other hand totally opposite.. As a Navajo Marine, its sad to hear Osama being called Geronimo, the "Coyote and Road Runner" would have been more like it... Just last week if you Googled "Code and Native American" we would have links to the "Navajo Code Talkers in WW2", now we get "Osama Bin Laden and Geronimo"........

I found it offensive to conflate Geronimo with Bin Laden by using that as the codename regardless of one's feelings about Osama B.

But then, this is the Wash. D.C. which still cheers on a football team with the name "Redskins" so cultural sensitivity is clearly not their strong suit.

I have to say that though I have no ties to Geronimo nor the Native people of our country, I was appalled. Why they would think that choosing Geronimo's name was a good idea, evades me.

I think the government should apologize, not only to Geronimo's people but to all of you. Shame on them!

I think it's absolute'ly stupid to use a great mans name like Geronimo. I have been told I come from the Aravaipa Apache, but I know theres French, Irish,and a bunch other also. Geronimo was a great man done wrong by our government. Looks like it's happening again. Levi.