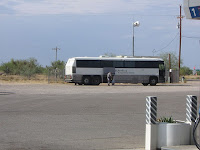 O'odham and Navajo lockdown protesters were found not guilty today in city court Tucson! In a separate action, today 16 people were cited for trespass at Wackenhut, the company that profiteers from transporting migrants from the border in buses.

O'odham and Navajo protesters locked down in Border Patrol Headquarters in May of 2010, demanding an end to the militarization of the border and a halt to the abuses of Indigenous Peoples by border agents.