Media Watch: Snowbowl and racism in the media 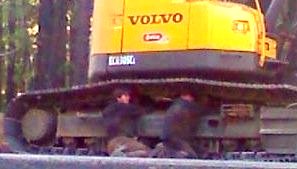 Today's media coverage of the Native American and other young people arrested on San Francisco Peaks, after they locked themselves to heavy equipment and to one another in a trench, reveals the racism and bias in Arizona's news media.

Although the protesters statement was available on the Internet all day at Google News, the media chose to criminalize the protesters without explaining the sacred nature of the mountain for Native Americans.

The majority of the media in Arizona and nationwide simply posted AP's article, without questioning it, researching the facts or contacting those who have been in a long federal court struggle to protect San Francisco Peaks from development by the Snowbowl ski resort.

Today in the media, the majority of reporters failed to even mention the most basic reason for the protest.

AP's article simply criminalizes the young people and fails to point out that these young people made the decision to be arrested in order to bring attention to the desecration of sacred San Francisco Peaks. AP failed to even provide one quote from the protesters lengthy statement. The statement was available, and easy to find, all day. It was posted Thursday morning in the Narcosphere, which appears on Google News, and was posted at Censored News all day.

Was this laziness on the part of the reporters, censorship by editors and publishers, or has this become the media standard: Do as little as possible, rewrite as much as possible from the web, take no risks and leave no moral footprints.

The racist attitudes in the Arizona business community were punctuated today when KAFF AM Radio in Flagstaff conducted an interview with Troy Bix of Flagstaff Business News. Bix first supported the Snowbowl, then launched into an xenophobic talk about migrants in southern Arizona.

Today's media coverage is reminiscent of the news coverage before the Civil Rights era, before Rosa Parks sat down on that bus, and before the march in Selma, Alabama.

Joyce Smith McDade, Western Shoshone, responded to today's news coverage and arrests, pointing out that tax dollars go to sheriff's departments for the arrest of Native Americans on their homelands.

"Our peoples' tax money at work, a compulsory payment of a percentage of income, property value, for support of a government to pay the County Sheriff to arrest the rightful owners of this sacred land."

Here is the statement, one more time, of those arrested, released before they locked themselves to heavy equipment:

Today we take direct action to stop further desecration and destruction of the Holy San Francisco Peaks. We stand with our ancestors, with allies and with those who also choose to embrace diverse tactics to safeguard Indigenous People’s cultural survival, our community’s health, and this sensitive mountain ecosystem.

On May 25th 2011, sanctioned by the US Forest Service, owners of Arizona Snowbowl began further destruction and desecration of the Holy San Francisco Peaks. Snowbowl’s hired work crews have laid over a mile and a half of the planned 14.8 mile wastewater pipeline. They have cut a six foot wide and six foot deep gash into the Holy Mountain.
Although a current legal battle is under appeal, Snowbowl owners have chosen to undermine judicial process by rushing to construct the pipeline. Not only do they disregard culture, environment, and our children’s health, they have proven that they are criminals beyond reproach.
Four weeks of desecration has already occurred. Too much has already been taken. Today, tomorrow and for a healthy future, we say “enough!”
As we take action, we look to the East and see Bear Butte facing desecration, Mt. Taylor facing further uranium mining; to the South, Mt.
Graham desecrated, South Mountain threatened, the US/Mexico border severing Indigenous communities from sacred places; to the West, inspiring resistance at Sogorea Te, Moana Keya facing desecration; to the North, Mt. Tenabo, Grand Canyon, Black Mesa, and so many more… our homelands and our culture under assault.
We thought that the USDA, heads of the Forest Service, had meant it when they initiated nationwide listening sessions to protect sacred places. If the process was meaningful, we would not have to take action today.
More than 13 Indigenous Nations hold the Peaks Holy. The question has been asked yet we hear no response, “what part of sacred don’t you understand?”
For hundreds of years resistance to colonialism, slavery, and destruction of Mother Earth has existed and continues here in what we now call Arizona.
The United States recently moved to join the United Nations Declaration on the Rights of Indigenous Peoples, evidently the US has not currently observed and acted upon this declaration, otherwise we would not be taking action today. This document informs our action, we also assert that UNDRIP supports the basis for our action.
Article 11, 1: Indigenous peoples have the right to practice and revitalize their cultural traditions and customs. This includes the right to maintain, protect and develop the past, present and future manifestations of their cultures, such as archaeological and historical sites, artifacts, designs, ceremonies, technologies and visual and performing arts and literature.
“Article 11, 2: States shall provide redress through effective mechanisms, which may include restitution, developed in conjunction with indigenous peoples, with respect to their cultural, intellectual, religious and spiritual property taken without their free, prior and informed consent or in violation of their laws, traditions and customs.”
“Article 12, 1: Indigenous peoples have the right to manifest, practice, develop and teach their spiritual and religious traditions, customs and ceremonies; the right to maintain, protect, and have access in privacy to their religious and cultural sites; the right to the use and control of their ceremonial objects; and the right to the repatriation of their human remains.”
“Article 25: Indigenous peoples have the right to maintain and strengthen their distinctive spiritual relationship with their traditionally owned or otherwise occupied and used lands, territories, waters and coastal seas and other resources and to uphold their responsibilities to future generations in this regard."
For nearly 4 decades, resistance to desecration and destruction of the Peaks has been sustained. Prayer vigils, petitions, lobbying, protests, and many diverse tactics have been embraced. Historic court battles have been fought.
We continue today resisting Snowbowl’s plan to spray millions of gallons of wastewater snow, which is filled with cancer causing and other harmful contaminants, as well as clear-cut over 30,000 trees. The Peaks are a pristine and beautiful place, a fragile ecosystem, and home to rare and endangered species of plants and animals.
Our action is a prayer.
We invite those of you who could not join us today and who believe in the protection of culture, the environment and community health to resist destruction and desecration of the Peaks:
- Join us and others in physically stopping all Snowbowl development!

- Demand that Arizona Department of Environmental Quality change its permission allowing wastewater to be used for snowmaking.