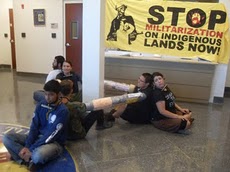 The legal defense, William G. Walker and Jeffrey J. Rogers, argued that the remaining charge of disorderly conduct did not apply because it did not meet any of the statutes of the charge. After three hours of deliberation, the judge found the six not guilty.

The city prosecutor had attempted to re-introduce the previously misfiled criminal trespassing as a misdemeanor charge, but this charge was dismissed after the first trial date for the occupiers in February. After an objection by the defense, the state’s motion was denied.

“Today’s not guilty verdict shows that we, as O’odham, are not the ones who are disorderly. It is the Border Patrol, the Department of Homeland Security, and the various levels of government that perpetrate the violence in our communities,” stated Alex Soto, Tohono O’odham, one of the protesters and member of O’odham Solidarity Across Borders Collective. “When will the institutions, whose conduct continues for more than 500 years of trespassing, that terrorize indigenous and migrants communities, be held accountable?”

“No state entity can deny peoples’ inherent right to freedom of movement," said Marisa Duarte, one of the protesters standing trial. "Borders are a colonial weapon used to continue the genocide of indigenous people and their culture. Through trade they exploit natural resources and use the profits to further the progress of neo-liberal infrastructure projects such as CANAMEX and NAFTA. This results in the criminalization of those who defy borders through living their lives traditionally. You see the forced relocation of families from borders all around the world. Today we say no more to this criminalization of people.”

O’odham Elders and community members attended the court proceedings to demonstrate their support.

“Today we celebrate our victory in court, but understand this is just one step in ending border militarization. We took action last May in order to directly confront the issues in our communities by physically intervening and occupying the Border Patrol station. Since that time, many have answered the call to end border militarization, and victories like today have inspired more action,” said Franco Habre.

As the six waited for the state’s decision, 16 angry community members targeted the prison firm G4S (formally Wackenhut) and were cited criminal trespassing charges. The16 declared in no uncertain terms their opposition to the company’s profiteering at the expense of immigrant communities in Tucson, across the nation and throughout the world. Their action, which was organized autonomously by Tucson community members, was carried out under the banner of Direct Action for Freedom of Movement.

The six still stand firmly with their commitment and demands to end border militarization and their initial demands are listed below:

Soto concluded, “This action was a prayer. We’d like to thank those who stood with us during this process and to all who firmly stand with us to end border militarization. The occupation of the Border Patrol station was never about any group/organization, or us, it was about directly confronting the terror that the state unleashes upon indigenous and migrant communities, so we can critically challenge border militarization. As an O’odham, I always think back to my grandparents’ teachings: We as O’odham people have always traveled freely, regardless of the border. It’s our land, who we are, and we will defend it.”


To view the occupation video and for additional resources please visit:
http://www.oodhamsolidarity.blogspot.com/
http://www.survivalsolidarity.wordpress.com/
at June 30, 2011

Is this the same Wackenhut company whose guards raped, strangled, and killed janet Chandler in Holland, MI in 1979?