By Protect Glen Cove
http://www.protectglencove.org/
Members of the Cultural Resource Department of the Shingle Springs Rancheria (Miwok) brought a large truck-load of wood down from El Dorado County and spent the day with us. Dozens of other visitors came by, many receiving tours of the grounds. Volunteers leafleted for a few hours at the Vallejo Farmers Market, talking with many people (including MC Hammer!) about Sogorea Te and inviting them to come out for a visit. An Afghan woman surprised us with delicious food for dinner.
A large group of women from the social justice organization Bay Area CodePINK will be arriving in Vallejo Sunday evening, after a day of marches and occupations in support of the International Workers Day strike. On Monday morning, they will march from downtown Vallejo to Glen Cove, to express solidarity with the Native American struggle to prevent the desecration of Glen Cove. A rally and press conference will be held at noon.

A PDF of the recent Addendum to the Civil Rights Complaint filed against GVRD and the City of Vallejo has been added to the Links and Resources page, along with a 4/25 Letter on the Legal Standing of Native American/ Ohlone individuals and SSP&RIT by the International Indian Treaty Council.
For more information, updates, and photos:

Zapatistas March in Silence: May 2011

“The Indigenous Zapatistas Will March in Silence in the City of San Cristóbal de Las Casas, Chiapas”

“And to you, citizens, forty-nine children make you understand
That in Mexico justice got its sight back,
But it only sees through the right eye and slanting.
That in this country that lady is armless like Venus de Milo,
And is not beautiful, but grotesque.
What for reason of those aforementioned defects,
The scale held up by the whore drags and is made of mud.
That the feelings that saw the Mexican nation born
Do not live below the toga of that madame justice
Written here, intentionally not capitalized.
That’s why, Mexicans, this winged squad calls us:
To raise the palace of Justice in our own hands,
With our own love and with indefectible truth.
To break the walls that the little dictators build
To slant our eyes, hearts and mouths.
To fight until our final breath
And ourselves first into a country
That is dignified of the passage of the peace that we won.”

– Juan Carlos Mijangos Noh. (Fragment of “49 balloons” in memory of the 49 dead children in the ABC daycare center of Hermosillo, Sonora.)


To: Javier Sicilia. From: Sup Marcos.
Brother and compañero: Greetings to you from the men, women, children, elderly, and ancient indigenous from the Zapatista Army of National Liberation (EZLN). The compañeras and compañeros with the Zapatista support bases have commissioned me to tell you the following: During these especially painful moments for our country, we feel summoned by the clamor that is synthesizing in your brave words, provoked by the pain from the vile murder of Juan Francisco Sicilia Ortega, Luis Antonio Romero Jaime, Julio César Romero Jaime and Gabriel Alejo Escalera, along with your call for a National March for Justice and against Impunity beginning May 5 in Cuernavaca, Morelos and arriving May 8 at the Zócalo in Mexico City. But, according to our modest capabilities, and in the framework of the national day which bring us together, the indigenous Zapatistas will march in silence in the city of San Cristóbal de Las Casas, Chiapas on May 7 to exercise our constitutional rights. After ending the march in silence, we will speak our words in Spanish and in our native languages, and after that we will return to our communities, villages and homes. In our silent march we will bring banners and signs with messages saying “Stop Calderón’s war,” “No more blood,” and “We have had it up to here.” We ask that you convey these words to the family members of the 49 boys and girls who died and the 70 others who were injured in the tragedy at the ABC daycare center in Hermosillo, Sonora, to the dignified Madres de Ciudad Juárez, to the Baron and Reyes Salazar families from Chihuahua, to the family members and friends of the victims in this arrogant war, to the human rights defenders of citizens and immigrants, to all of those who come together for the National March for Justice and against Impunity. We are responding to your call to name innocent victims, and today we are naming the boys and girls who died at the ABC daycare center in Hermosillo, Sonora, who are still waiting for justice: María Magdalena Millán García, Andrea Nicole Figueroa, Emilia Fraijo Navarro, Valeria Muñoz Ramos, Sofía Martínez Robles Fátima, Sofía Moreno Escalante, Dafne Yesenia Blanco Losoya, Ruth Nahomi Madrid Pacheco, Denisse Alejandra Figueroa Ortiz, Lucía Guadalupe Carrillo Campos, Jazmín Pamela Tapia Ruiz, Camila Fuentes Cervera, Ana Paula Acosta Jiménez, Monserrat Granados Pérez, Pauleth Daniela Coronado Padilla, Ariadna Aragón Valenzuela, María Fernanda, Miranda Hugues Yoselín, Valentina Tamayo Trujillo, Marian Ximena Hugues Mendoza, Nayeli Estefania González, Daniel Ximena Yanes Madrid, Yeseli Nahomi Baceli Meza, Ian Isaac Martínez Valle, Santiago Corona Carranza, Axel Abraham Angulo Cázares, Javier Ángel Merancio Valdez, Andrés Alonso García Duarte, Carlos Alán Santos Martínez, Martín Raymundo de la Cruz Armenta, Julio César Márquez Báez, Jesús Julián Valdez Rivera, Santiago de Jesús Zavala Lemas, Daniel Alberto Gayzueta Cabanillas Xiunelth, Emmanuel Rodríguez García Aquiles, Dreneth Hernández Márquez, Daniel Rafael Navarro Valenzuela, Juan Carlos Rodríguez Othón Germán, Paúl León Vázquez, Bryan Alexander Méndez García, Jesús Antonio Chambert López, Luis Denzel Durazo López Daré, Omar Valenzuela Contreras, Jonathan Jesús de los Reyes Luna, Emily Guadalupe Cevallos Badilla, Juan Israel Fernández Lara, Jorge Sebastián Carrillo González, Ximena Álvarez Cota Daniela, Guadalupe Reyes Carretas, Juan Carlos Rascón Holguín.

We demand justice for them. Because we know well that to name the dead is a way of not abandoning them, of not abandoning ourselves. Don Javier: Know that we are also making a call to our compañeros in the Other Campaign in Mexico and to those who are in other countries so that they join the mobilization that has been called. We will look forward to what happens for support in any way we can. OK. Greetings and don’t forget you are not alone.

From the mountains in southeast Mexico,
Subcomandante Insurgente Marcos
April 2011
at May 02, 2011 No comments: 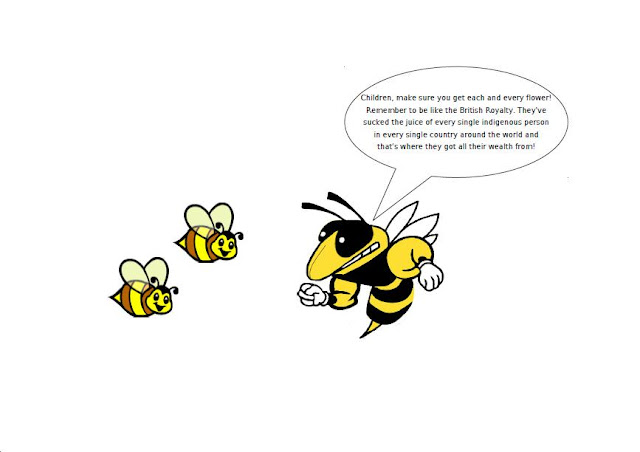 .Censored News Cartoon by Joseph Mishawaka
Children, make sure you get each and every flower! Remember to be like the British Royalty. They've sucked the juice of every single indigenous person in every single country around the world and that's where they got all their wealth from!
at May 02, 2011 No comments:

The Frank’s Landing Indian Community, in partnership with the Native American Church of Canada and the Secwepemc (Shuswap) Nation are working together to raise awareness of Wirikuta culture and survival issues. This month Seattle, WA and Vancouver, BC will host Wirikuta delegates to speak about the issues their people face today. (See schedule below.)
We would like to extend an invitation to you to join our efforts by hosting Jesus Lara Chivarra, a native Wirikuta, to share a presentation that introduces his culture’s rich spiritual and artistic heritage, emphasizing the relationship between preserving the health of the land and its people. He will be available to speak in the Seattle area May 2 -6, as well as May 9-11, If you are interested in having him in your classroom or community center, please contact me as soon as possible. I look forward to your response.
Sincerely,
Suzette Bridges
Franks Landing Indian Community

Jesus Lara Chivarra of the Wixakari (Huichol) tribe will be traveling this month from his native Mexico to share his culture and speak about the issues his people face today.
An artist and a healer, he is a native of the San Sebastian Teponahuaxtlán and serves as a member of the coordinating board of the Wirikuta Defense Front.

Legally recognized by the Mexican government as natural heritage site and a UNESCO World Heritage site, the native land of the Wirikuta is threatened by foreign business interests. First Majestic Mining, a Canadian company, has laid claims to purchase over 6,000 hectares of Wirikuta land in a plan to extract silver through open pit mining. As descendants of Aztecs, the traditions and livelihood of the Wirikuta are dependent on the health of the land. Mining would destroy the sacred mountain, Cerro Quemado, considered by Wirikuta as the site where a sacred deer first raised the sun into the sky. The sacramental cactus, hikuri will similarly become extinct, as would the ceremonies and art centered around its use in Wirikuta culture.

The plan would also have grim consequences for the ecosystem that supports the Wirikuta. Located in the Chihuahuan desert, the land was named by the World Wildlife Foundation as part of the three most biodiverse deserts in the world. If successful, the mine would endanger over 50 species of cacti, as well as many endangered species of mammals and reptiles. In addition, contamination and overuse threatens the only underground water source for 16 villages in this remote mountainous region.

Schedule of Events:
May 3 Tuesday press conference (TBA)
May 4
May 5
May 6 (time to be confirmed will be AM) UW- United Nations Student group to host event & 6pm AFSC fundraiser
May 7 Saturday Yelm Meeting with Sid mills
May 8 Sunday Seattle Fundraiser at Centro de la Raza 2524 16th Avenue South, Seattle, WA 98144-5104
May 9 UW- Tacoma (time to be confirmed)
Tuesday May 10 Puyallup Tribe Council
May 11 Wednesday First Salmon Ceremony Puyallup River
May 12 wwu at Bellingham (still to be confirmed)
May 13 Sr Jesus leaves to Vancouver
May 13-18 outreach for solidarity action!!

May 19 solidarity action at Mexican Consulate and Canadian consulate 4th and Blanchard, Seattle time tba
at May 02, 2011 No comments: 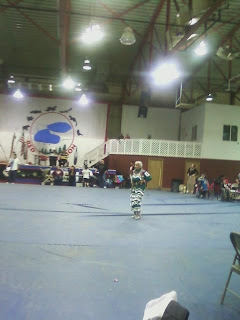 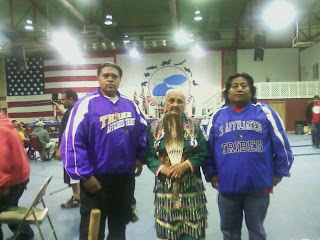 Photo by Long Walker Manny Calapoo:  Carl Bad Bear Sampson, Mrs Tom and Manny in Minn. Manny said, "Elder jingle dress dancer, champion beat out girls in there 20s." Thanks to Manny and Carl for sending cellphone photos to Censored News.
at May 02, 2011 No comments: