Long Walk 3 at White Clay, Nebraska. The northern route is now at Leech Lake, Minn. Thanks to Chris Francisco and the walkers for the video.
at May 04, 2011 1 comment: 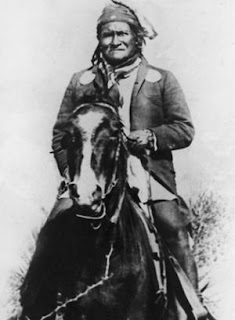 .
Wednesday, May 4, 2011
By Jeff Houser
Letter from Jeff Houser, Chairman of the Fort Sill Apache Tribe of Oklahoma, to President Barack Obama.

I am writing on behalf of and in my capacity as the Chairman of the Fort Sill Apache Tribe. On Sunday, our Tribe like most of the country was ecstatic about your announcement that Osama bin Laden had been killed in a military operation in Pakistan. The performance of our military and intelligence agencies in locating and taking action against Osama bin Laden made us all of proud to be Americans.

However, late yesterday as details of the operation came to light, our Tribe and many other Native Americans learned of a disturbing fact that tempered our positive feelings about this great accomplishment. Through various media reports our Tribe found out that the code name used for Osama bin Laden on this operation was Geronimo. As you may or may not know, Geronimo was a member of our Tribe. He is buried in the Fort Sill Apache Prisoner of War Cemetery on the Fort Sill Army Base in Lawton, Oklahoma where he died after almost 23 years of captivity.

We are quite certain that the use of the name Geronimo as a code for Osama bin Laden was based on misunderstood and misconceived historical perspectives of Geronimo and his armed struggle against the United States and Mexican governments. However to equate Geronimo or any other Native American figure with Osama bin Laden, a mass murderer and cowardly terrorist, is painful and offensive to our Tribe and to all native Americans.

Geronimo was a renowned Chiricahua Apache leader who personally fought to defend his people, territory and way of life. Unlike the coward Osama bin Laden, Geronimo faced his enemy in numerous battles and engagements. He is perhaps one of the greatest symbols of Native American resistance in the history of the United States.

What this action has done is forever link the name and memory of Geronimo to one of the most despicable enemies this Country has ever had. This fact is even more appalling when examined in light of the United States House of Representatives February 2009 Resolution that honored Geronimo for “his extraordinary bravery, and his commitment to the defense of his homeland, his people, and Apache ways of life.” Now a little over two years later your Administration has further immortalized his existence by linking him to the most hated person in recent American history.

Our Tribe and most Native Americans would hope that you would issue a formal apology to the Geronimo family members, the Fort Sill Apache Tribe and to all Native Americans for this action. Right now Native American children all over this Country are facing the reality of having one of their most revered figures being connected to a terrorist and murderer of thousands of innocent Americans. Think about how they feel at this point.

We all remember that you were elected on a message of compassion and change. This action by your Administration showed neither compassion toward Native Americans nor a change in the perception of us or an understanding of our struggle. Please do not allow this injustice against one of our greatest figures to stand. Only you Mr. President can take steps to right this wrong.