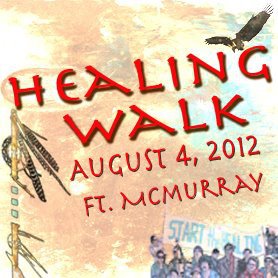 More Than 250 First Nations and Allies From Across North America Gather In Alberta To Raise Awareness
First Nations delegations from British Columbia and Ontario show growing concern and resolve against tar sands infrastructure projects across Canada.

French translation:
http://bsnorrell.blogspot.fr/2012/08/first-nations-march-against-tarsands.html
http://www.chrisp.lautre.net/wpblog/?p=915
FORT MCMURRAY ALBERTA (August 4, 2012) – Hundreds of First Nations leaders from BC, Alberta, the NWT and Ontario along with First Nation actress Tantoo Cardinal and allies from across North America, gathered in Fort McMurray today, to walk 13-kilometres through the visceral landscape of tar sands operations to bring attention to the destructive impacts of tar sands projects and pipelines on surrounding communities and the environment.
First Nation representatives from the Heiltsuk (BC), Yinka Dene (BC), Coastal First Nations (BC), the Union of BC Indian Chiefs, Six Nations (Ontario) and Aamijiwnaang (Ontario) joined with local First Nations leaders in a traditional mixing of the waters ceremony, bringing water from their respective territories as a symbol of importance of the protection of water and the sacred connection to mother earth.
Local elders led the group in prayers along the route that was once valuable northern Boreal forest and fertile traditional hunting, fishing and gathering grounds, stopping in the four directions to lay down tobacco as an offering for healing of the land.
“We have come from all over North America to walk together through the heart of the destruction caused by the ever-expanding tar sands and offer prayers for the healing of the land and its people,” said Dene National Chief Bill Erasmus. “For more than 500 years governments have fought over our lands and resources. It’s time the provincial and federal governments sit down with the First Nations, the rightful owners of these lands and resources, to decide if and when these lands should be developed.”
The third annual healing walk was organized by Keepers of the Athabasca, a network of First Nation, Metis and allied communities along the Athabasca River that includes people whose lives have been directly impacted by tar sands operations.
“The places where we used to pick berries and find our medicines have been destroyed by rapid tar sands projects,” said Anthony Ladouceur, Councillor of the Athabasca Chipewyan First Nation. “Our people have lived here for thousands of years, but it is becoming increasingly difficult to continue to live off the land with industry expanding all around us.”
The Alberta tar sands currently produce approximately 1.8 million barrels of oil per day; if industry and government’s expansion plans are approved that number could reach six million barrels per day. Local opposition to Shell’s two proposed open pit mine applications is growing, along with North American-wide resistance to pipeline proposals. Four pipelines are being proposed to transport tar sands oil: Enbridge Northern Gateway, Kinder Morgan Trans Mountain, Trans Canada Keystone XL, and Enbridge Line 9 reversal.
“I am deeply honoured to have the opportunity to participate in the 3rd Annual Tar Sands Healing Walk,” said Grand Chief Stewart Phillip, President of the Union of BC Indian Chiefs. “This sacred walk serves to remind us that we, as parents and grandparents, have the unconditional responsibility to safeguard and pass on the legacy of respecting and caretaking Mother Earth, entrusted to us by our ancestors, to our children and grandchildren.”
“This walk creates strength and unity among the people who have to live with the destructive impacts of tar sands. Together, we are more empowered to ensure a clean and healthy world for future generations,” said Roland Woodward Chair of the Keepers of the Athabasca.
The walk was not a protest, but a spiritual gathering to offer prayers for the healing of Mother Earth and all those negatively impacted by tar sands projects and associated infrastructure. Participants walked along Highway 63 past Suncor and Syncrude’s operations to help heal what has been destroyed and to give each other the spiritual strength to carry on.
at August 04, 2012 No comments: