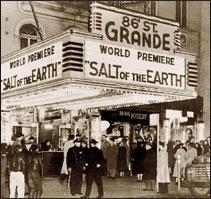 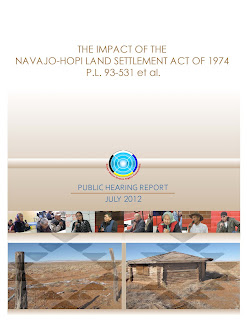 On July 6, 2012, commissioners for NNHRC unanimously adopted the public hearing report in a resolution (NNHRCJULY-21-12) as one of two last actions before ending their four year term on July 14, 2012.

NNHRC adopted the United Nations Declaration on the Rights of Indigenous Peoples in 2008 as a minimum standard of achievement for NNHRC when advocating for and protecting the human rights of Navajo citizens. With that, UNDRIP provided the standard to ascertain human rights violations in NNHRCs public hearing report.

Presently, NNHRC is the only Navajo Nation governmental entity using the U.N. Declaration on the Rights of Indigenous Peoples as a minimal standard of achievement.
What is not widely known is that the Navajo Nation officials presented recommendations to a working group when the Declaration was in draft form and had advocated its adoption by the U.N. General Assembly for nearly 15 years. In 2007, the United Nations adopted UNDRIP and later the United States as a member state to the United Nations did too, in 2010.
Interestingly, “[m]any of the Navajo families who are suffering from the Navajo-Hopi relocation program have journeyed to faraway places such as Geneva, Switzerland, in order to present their stories to international bodies,” according to NNHRCs resolution. Further, “[m]any of these international travels coincided with the Navajo Nation’s advocacy for the adoption of UNDRIP.” As a result, “the input and advocacy by the Navajo families who are directly impacted by the Navajo-Hopi relocation resulted in the United Nations General Assembly adopting Article 10 of UNDRIP.”
Article 10 of the U.N. Declaration on the Rights of Indigenous Peoples states,
“Indigenous peoples shall not be forcibly removed from their lands or territories.” No relocation shall take place without the free, prior and informed consent of the indigenous peoples concerned and after agreement on just and fair compensation and, where possible, with the option of return.”
Decisively, according to NNHRCs resolution the commission found that, “Navajo families and individuals [who] were relocated from their traditionally owned and used homelands, including those [who] remained on their lands under arrangements, have egregiously suffered, and continue to grieve, largely from the long lasting and devastating impacts on their lives.”
Glimpse at the Report
The report provides a sincere acknowledgement section from the commissioners, a summary of the historical account of the Navajo-Hopi land settlement, an overview of the international human rights laws including standards of assessing the impacts of relocation, a comprehensive summary of the testimonies provided by Diné and non-Diné individuals, 22 findings, and 16 recommendations.

As an example, the first finding in the report states, “Because the Navajo-Hopi Relocation Act falls within the scope of human rights violations under the standards of the United Nations Declaration on the Rights of Indigenous Peoples, the Navajo Nation Human Rights Commission recommends P.L. 93-531 et al., be repealed. Navajo lands should be returned to the Navajo Nation and all efforts to compete relocation should be halted immediately.”

Finally, NNHRC states, “The legacy of [Public Law] 93-531 et al. has been a source of profound dislocation, alienation, and trauma for Diné citizens who have been forced to relocate from their homeland and based upon investigation, NNHRC finds the forced relocation of over [ten] thousand Navajos is a clear violation of their human rights.”

The Navajo Nation Human Rights Commission, initiated this process with its charge to conduct public hearings on and off the Navajo Nation to determine the state of race relations between Navajos—Diné, and non-Navajos.  The state of race relations was assessed after NNHRC held a series of public hearings in 25 neighboring communities surrounding the Navajo Nation to determine if Navajo human rights were being violated. At that time, about 158 people testified. Many of whom were relocated as a result of the Navajo-Hopi Settlement Act of 1974—P.L.93-531.

Throughout the week, NNHRC will provide a series of statements to better provide a comprehensive overview of the testimonies, NNHRC findings and recommendations, redress, and Commissioners’ concerns to the public through different media efforts.

"Indigenous peoples have the right to self-determination. By virtue of that right they freely determine their political status and freely pursue their economic, social and cultural development," according to Article 3 of the U.N. Declaration on the Rights of Indigenous Peoples.