Auction of Pe'Sla cancelled by owners 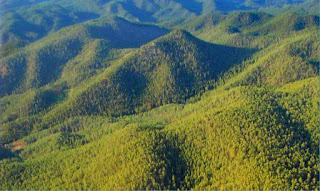 The auction scheduled for August 25, 2012, for the acreage called Reynold’s Prairie, also known as Pe’Sla to the Oceti Sakowin (Great Sioux Nation), has been cancelled on direction of the owners’ representative, according to Brock Auction, Co., Inc: http://www.brockauction.com/upcoming.htm
The owners are not commenting as to why the auction has been cancelled. At this time, Lastrealindians, Inc. is consulting with Oceti Sakowin Tribes and attempting to find out more information.

UPDATE: TRIBES OF THE GREAT SIOUX NATION AND LASTREALINDIANS, INC. WILL CONTINUE EFFORT TO SECURE PE’ SLA
Pe Sla has been taken off the auction block. However, the property is publicly listed. The Tribes of the Great Sioux Nation are moving forward on their own behalf with Lastrealindians, Inc. in continuing to raise money to ensure Pe’ Sla will be protected as a sacred site, forever.
Updates will continue as more information becomes available.
Updates forthcoming.
Contact Info: 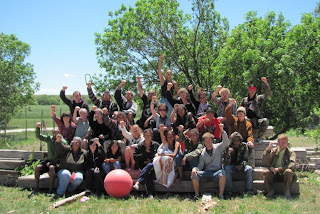 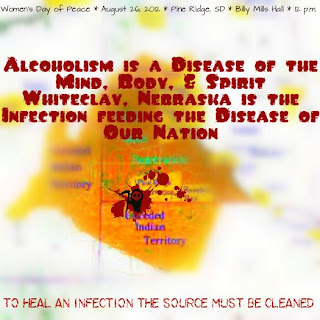 On August 26th women of the Oglala Sioux Tribe, along with allies including Deep Green Resistance, will hold an event called the Women’s Day of Peace in response to the peddling of alcohol in White Clay.
“For over 100 years the women of the Oglala Lakota nation have been dealing with an attack on the mind body and spirit of their relatives," says Olowan Martinez who is a main organizer of the event and resident of Pine Ridge.
“The Oglala have been silenced through chemical warfare waged by the corporations who are out to exploit and make a profit off of the
suffering and misery of our people. The time has come to end this suffering by any means necessary.”
.The town of Whiteclay, Nebraska lies less than 300 feet from the border of the Pine Ridge Reservation, where the sale and consumption of alcohol is prohibited.
Whiteclay has a population of 14, yet 4 liquor stores in the town sell 12,500 cans of beer each day. It has been documented that the stores sell
to bootleggers, intoxicated people, minors, and trade beer for sexual favors.
The impact of alcohol distribution is felt by women and children on the reservation in particular, with rates of sexual assault and domestic violence double the national average.
Young Lakota activists and their non-indigenous allies blockaded the road leading into Whiteclay for over 4 hours on June 9th of this year to protest the sale of alcohol to Indigenous People. The action in August will be a continuation of these efforts.
The Women’s Day of Peace has been organized by women on the reservation and the event will be female directed, including street theater and speeches. The match will start at 12:00 pm at Billy Mills Hall in Pine Ridge, SD and proceed into Whiteclay where the other activities will take
place. Join us to take a stand against the continued genocide of indigenous peoples!
For more information regarding White Clay go to http://battleforwhiteclay.org/
at August 23, 2012 No comments:


‎8/23/12 PM Update: Early this morning authorities with the Flagstaff Police Department, the Fire Department and an unknown federal agency with an unmarked white van and agents in camouflage began to climb the tree where the tree-sit platform and supplies were to disassemble to platform and confiscate supplies. As of 3:45pm today, no arrests related to the tree-sit have been made. James Kennedy is safe but will not be able to continue the tree-sit. We urge everyone to take direct action in creative and safe ways for the protection of our water, the peaks and our community.

FLAGSTAFF, Ariz. – At approximately 1:30am on Thursday, August 23, 2012, James Kennedy, had to perform an emergency descent on his back-up rappel line to avoid being struck by lightning. “I awoke to lightning striking all around me. Immediately lightning struck so closely I was blinded and could not hear for several seconds after each strike,” stated James after making it down safely from his platform in the 75ft ponderosa pine tree. This was the third major thunderstorm in as many days to hit the vicinity of the tree-sit.

“Safety for both James and the ground crew was a concern since the first day” said Ariana Sauer, a volunteer with ProtectThePeaks.org and an on the ground supporter of the tree-sit. “Although the Flagstaff Police Department made each night more difficult by raiding the surrounding area on Tuesday night and by cutting off contact between us and James, we stayed committed to his safety and ensuring that the message for clean water and clean snow was heard.”

“Having to come down tonight only makes my resolve to continue working for clean water and healthy communities that much stronger. I encourage everyone to take direct action in safe and creative ways so our voices continue to be heard,” stated James. “This is not a struggle we can afford to lose. With all the current research on the dangers of treated sewage effluent, we cannot continue to allow the city to experiment on our children.”

“The City of Flagstaff needs to understand that our water and our communities are not for sale,” stated Xander Vautrin@, on the ground supporter of the tree-sit. “We will continue to build off the momentum from the tree-sit to pressure our public officials both locally and nationally to protect our water from private corporate interest for our children, our environment and our future.”

The tree-sit was initiated on Monday morning to block construction of a pipeline that would transport 180 million gallons of sewage effluent from the City of Flagstaff to Arizona Snowbowl for snowmaking on the San Francisco Peaks. Arizona Snowbowl would be the only ski area in the world to use 100% wastewater for snowmaking. The treated sewage effluent has been proven to contain pharmaceuticals, hormones and antibiotic resistant bacteria.

Wednesday:
At approximately 6:15am on Wednesday August 22nd, Flagstaff Fire Department officials began resetting two “lifelines” that secure James’ platform. The lines were originally tied from the ponderosa pine where he is sitting to three other trees and the equipment that Snowbowl is using to dig the pipeline. The Fire Department’s stated purpose in resetting the lines was to allow for the removal of the equipment and to create safe passage along wooded trails for mountain bikers. “There are several other obvious options available that would ensure mountain biker safety, including the fact that the area is already entirely roped off with bright yellow police tape,” said Derek Minno Bloom, who was acting as police liason, “It was clear that they were using mountain biker safety as an excuse to reset James’ lifelines in order to accommodate Snowbowl.”


On-ground supporters informed fire officials that James was unharnessed, not tethered onto anything, while they were rearranging the lines and that they, therefore, risked James’ safety by doing so. Despite protests from ground supporters, including experienced climbers who were concerned about the dangerous maneuver, the fire department moved one of James’ lifelines higher up on its tree, and moved the second lifeline that was attached to the equipment to a nearby tree. Fortunately, James is safe and remains in his 70-foot high stand despite the rainy weather and intermittent lightning, which is striking increasingly close to the stand and is a growing safety concern. “The city of Flagstaff chose to risk my life to ensure corporate access to community water that still poses a public health threat. The platform rocked and swayed as the lifelines were reset and I was unharnessed, but I am still here and will continue to work for community access to clean water. I urge everyone to take
action for safe and healthy communities,” James stated. The tree-sit was initiated on Tuesday to block construction of a pipeline that would transport 180 million gallons of sewage effluent from the City of Flagstaff to Arizona Snowbowl for snowmaking on the San Francisco Peaks. Arizona Snowbowl would be the only ski area in the world to use 100% wastewater for snowmaking. The treated sewage effleunt has been proven to contain pharmaceuticals, hormones and Antibacterial Resistant Genes. The San Francisco Peaks are considered an ecological island and held sacred by more than 13 Indigenous Nations.

Last night, Flagstaff Police indicated that they would arrest any on-ground supporters who stayed in Thorpe Park past 10pm. “Around 9:30 an on-ground
supporter went to the park parking lot to get blankets and saw six police cars and several security vans. The supporter asked the police what was going on and
they informed him they were going to raid the park and would cite or arrest anyone there. The supporter was able to get back up to the site and inform the
ground crew to pack up before the raid,” described Berkley Carnine, who was acting as a police liason at the time. On-ground supporters remained
nearby and returned to the park at 6am, shortly before the Fire Department began resetting James’s lines.

Today at 8:30am Alexander Iwasa, 33, and Erik Fettig, 20, had their initial hearing in Flagstaff Municipal Court after spending the night in Coconino County Jail. Yesterday, Iwasa and Fettig locked themselves down to the equipment that one of James’ lifelines was attached to. “The workers were messing with James’ lines.
We asked them to stop and they wouldn’t stop—they said James was going to be coming down that day—so as soon as they left we locked down on the drilling
machine to make sure no one could mess with the lines,” said Iwasa of Tuesday’s action.  The two were charged with trespassing with bail set at $238 each.
The community pulled together bail money and Iwasa and Fetting were released today at 11:30am. They both state that they are doing well and they
urge others to take direct action in support of the Peaks and/or to donate. They will be arraigned on Monday August 27th at 10am.  Funds for
jail support and other costs are still needed.  Please donate at www.protectthepeaks.org.
The San Francisco Peaks are considered an ecological island and held sacred by more than 13 Indigenous Nations.

We invite those of you who believe in the safety and health of our children, the sanctity of our environment, and the protection of public water to demand that:

- The City of Flagstaff rescind the wastewater contract with Snowbowl!

- An immediate moratorium on the City of Flagstaff’s use of treated sewage effluent in public spaces where any person may come in contact with reclaimed wastewater, until new research and technology is available to mitigate long-term environmental & community health risks.

-The use of public water in this desert climate of Flagstaff with only a projected 25-38 years of water left for people’s consumption, should be cleaned and used for people to drink, not for a private corporation to make a profit.

City of Flagstaff Mayor and Council: