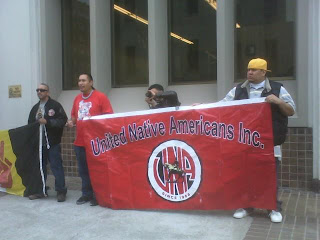 SAN FRANCISCO, CA (8/23)- Native American leaders held a protest outside the Hearst Building on 3rd Street & Market Street at 11:00 AM, in an effort to bring attention to what many are calling a "threat to the heart of the Sioux nation."
Quanah Brightman, United Native Americans Inc. stated,"The Rosebud Sioux Tribe has designated $50,000 for the purpose of purchasing Pe'Sla land. By contributing to the efforts of all Sioux Tribes, we aim to purchase at least some of the tracts, if not all. Many of the Sioux Tribes continue to exsist in poverty and do not have a thriving casino-based economy as the media may have portrayed. Yet, we continue to fight for what is sacred, because it matters... This land was taken from the Sioux Tribes ILLEGALLY in violation of the Fort Laramie Treaties of 1851 and 1868 .Although we believe our sacred places were taken illegally by the United States government, Lastrealindians, Inc. is collaborating with the Rosebud Sioux Tribe and the Great Sioux Nation (the Oceti Sakowin) to centralize fundraising to save one of our most sacred sites, Pe'Sla...." At c.12:00 PM, members of the American Indian Movement (AIM) and the United Native Americans Inc., gathered outside the San Francisco Chronicle to bring further attention to their cause. 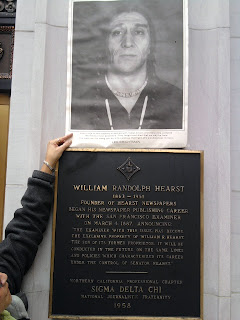 In an unprecedented, collective effort, the united Sioux Nation (the Oceti Sakowin) is attempting to buy as much of Pe'Sla as possible, to save it from destruction and ensure that future generations of Lakota, Dakota, Nakota and other Tribal Nations that consider the Black Hills holy, will continue to have access to this vital sacred site to practice their faith on its ceremonial grounds in its natural, pristine state."
Quanah Brightman spoke further saying,"In the Spirit of Crazy Horse, U.N.A. is demanding the Hearst Corporation contribute to the struggling Lakota Sioux Nation whom they have stolen land and precious Natural resources from. Professor Lehman Brightman states that the Hearst Corporation “has never tried to make amends with the Lakota Sioux Nation.” The heir to the Hearst fortune, William Randoph Hearst III, has “not given one red cent to the Sioux Indians. They could easily afford to set up a scholarship program or improve dilapidated housing on Sioux Territory.” Nearly 97% of the Sioux Nation's population lives below Federal poverty levels... The United States Government and the Hearst Corporation can be prosecuted for violations of International Law. Art. VI of The United States Constitution states, “All treaties made, or which shall be made ... shall be the Supreme Law of the Land." U.N.A. believes it is time that punitive damages be paid to the Lakota Sioux Nation for direct violation of the Fort Laramie Treaties of 1851 & 1868...."
According to Janeen Antoine, "We ask that the Hearst Corporation purchase this land and RETURN it IMMEDIATELY into the hands of the Lakota people, as a part of the reparations of their illegal seizure of Native lands...."
Acording to Quanah Brightman, the organization, "United Native Americans, Inc. (or U.N.A.) was formed in 1968 in San Francisco, California to promote the General Welfare of Native Americans. There are no paid staff or officers in U.N.A. and all work is donated. U.N.A. is not funded and exists solely on the support derived from membership dues, the sale of U.N.A. Merchandise, Tee Shirts, buttons, bumper stickers, and Posters, plus the few donations that have been received... U.N.A was founded by Indians for Indians and is controlled by Indians. U.N.A. has been Labeled a "Militant" organization because of it's Aggressive Stand it has taken and because of the slogan it stresses--"INDIAN POWER", which is defined as Self-Determination, the Right to Run your Own Affairs and to Direct your Own Destiny, which is something Indian People Definitely Need. U.N.A is Definitely an Action Organization and if this means "Militant" then we are Militants. We as Native Americans, in order to perpetuate our Heritage, Exercise Constructive Leadership, and to perfect a Native American Organization which will Respond to the Needs of Native Americans...."
According to its website, the American Indian Movement states as its purpose,"In the 30 years of its formal history, the American Indian Movement (AIM) has given witness to a great many changes. We say formal history, because the movement existed for 500 years without a name. The leaders and members of today's AIM never fail to remember all of those who have traveled on before, having given their talent and their lives for the survival of the people... At the core of the movement is Indian leadership under the direction of NeeGawNwayWeeDun, Clyde H. Bellecourt, and others. Making steady progress, the movement has transformed policy making into programs and organizations that have served Indian people in many communities. These policies have consistently been made in consultation with spiritual leaders and elders.The success of these efforts is indisputable, but perhaps even greater than the accomplishments is the vision defining what AIM stands for... Indian people were never intended to survive the settlement of Europeans in the Western Hemisphere, our Turtle Island. With the strength of a spiritual base, AIM has been able to clearly articulate the claims of Native Nations and has had the will and intellect to put forth those claims...."
While the protest was peaceful and nonviolent, members of the Hearst Corporation called San Francisco police @ 1:30 PM, claiming that the protest was posed a "security risk". While the protest was small, leaders say that they will be spreading the word and continuing to fight.
- Jose Ricardo G. Bondoc
Rosann Forsberg
more information please go to :
Help Save Pe'Sla, the Heart of the Sioux Nation. To make a contribution, go to http://www.indiegogo.com/PeSla-LakotaHeartland?a=1006191
Any amount given, no matter how small, is appreciated.http://www.lastrealindians.com/

Auction cancelled for SD land considered sacred
http://www.huffingtonpost.com/huff-wires/20120823/us-buying-the-black-hills/
Friend Us On Facebook.com
http://www.facebook.com/groups/unitednativeamericansinc
View Our Educational Videos on You Tube at
http://www.youtube.com/playlist?list=PLC192C91C0E6A0CBE&feature=mh_lolz
Follow UNAINC on Twitter
http://twitter.com/#!/unainc
at August 24, 2012 No comments: