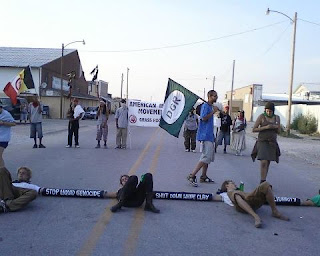 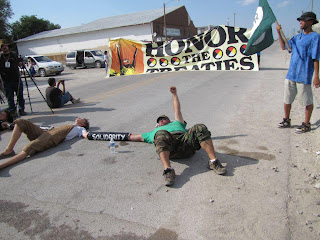 Women of the Oglala Lakota nation along with activists from Deep Green Resistance, AIM Grassroots, Un-Occupy Albuquerque, Occupy Lincoln, and Rocky Mountain Peace and Justice Center took part in a march from Billy Mills Hall in Pine Ridge into White Clay to protest against the predatory liquor industry present there.
White Clay has a population of 14, yet 4 liquor stores in the town sell 12,500 cans of beer each day. The stores have been documented repeatedly selling to bootleggers, intoxicated people, minors, and trading beer for sexual favors.
“For over 100 years the women of the Oglala Lakota nation have been dealing with an attack on the mind body and spirit of their relatives”, says Olowan Martinez who is a main organizer of the event and resident of Pine Ridge. “The Oglala have been silenced through chemical warfare waged by the corporations who are out to exploit and make a profit off of the suffering and misery of our people. The time has come to end this suffering by any means necessary.”
Debra White Plume, a Lakota activist and resident of Pine Ridge who spoke at the event proclaimed, “A sober Indian is a dangerous Indian. We have to send a message to Nebraska and its citizens that we are not going to tolerate business as usual. This is the Women’s Day of Peace but that peace will soon be over”. 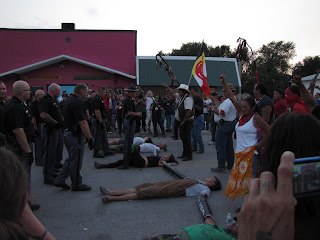 After the march and speeches members of Deep Green Resistance locked down and blockaded the road into White Clay.
Less than a half hour after the lockdown began a police officer rolled down their window and indiscriminately pepper sprayed into a crowd. Up to 12 people were pepper sprayed including the 10 year old son of a Lakota woman who helped organize the march. Also, an elder Lakota woman, Helen Red Feather, reported having her leg hit by a police car in motion. Medics with the protest treated pepper spray injuries.
At 7:39, the five activists who participated in the lock down were hauled off in a horse trailer to the Sheridan County jail in Rushville. They have since been released on their own recognizance.
Today, justice is far from complete, since White Clay continues to enable and enact the destruction of the Oglala Lakota and the people of Pine Ridge. The continued subjugation of the Oglala Lakota of the Pine Ridge Reservation will not end as long as the liquor stores in White Clay continue to operate.

Chants of “As long as it takes!” began by those locked down and the people standing with them in the crowd at the beginning of the lockdown. The struggle continues.
For press inquiries, please contact Jessica Garraway:
Email: garrawaj@riseup.net
Phone: (253) 906-4740
at August 26, 2012 1 comment:

Non-profits are deceiving Indigenous grassroots people, while secretly profiteering
By Brenda Norrell
Censored News
http://www.bsnorrell.blogspot.com
Censored News has received a great deal of information on non-profits who claim to serve Indigenous Peoples, including fraud, theft and deception of grassroots people. Are non-profit financial statements public? Yes, including the salaries of staff.
Secretly, some non-profits are putting large amounts of funds into salaries and travel for their own benefit, including the grant writers and staff -- while deceiving grassroots people and keeping these grants secret. Native people are calling for transparency by these non-profits. (Investigate the financial records for yourselves: http://smallbusiness.findlaw.com/incorporation-and-legal-structures/nonprofit-financial-statements.html )
The key issues for both Native and non-Native operated non-profits are secrecy about staff salaries, the amount of money being pocketed from donations, the placing of family members on payrolls, and secretly creating profitable spin-off consulting firms.
Deception and wannabes
Traditional Yaqui women in the villages in Sonora, Mexico, said they were never told about grant funding for workshops held there by a non-profit. After being told there was no funding for a workshop, Yaqui women were required to provide the food, and sleep on the floor, while the speakers stayed in pricey hotels. Since they do not speak or read English, or have access to the Internet, they had no way of knowing about large grants being applied for in their names.
There are many sinister issues about board control, including non-Indians, wannabes, seizing control of non-profit "Indigenous" boards by holding meetings in foreign countries and refusing to give the longtime board members and founders airline tickets to get there.
At the same time, several non-Indian frauds have captured the limelight in the media on human rights issues. This has increased their ability to get grant funding for their own selves. Some profiteers continue to function by threatening lawsuits if exposed.
Currently, a number of people who suddenly decided they were Native Americans have placed themselves in the limelight on issues at the United Nations, taking over the agenda and the voice.
Also, it is unethical for news reporters to receive secret grant or public relations funding to promote individuals or groups, while posing as an unbiased news reporter.
People working in human rights are often very trusting, and sometimes too naive. This has meant that some corrupt individuals at non-profits have found it easy to keep huge salaries and travel expenses secret. Sadly, Indigenous grassroots people are the ones being used.
Co-opting with 'green' grants
On a related issue, the worst polluters in the United States are attempting to co-op the voices of those most critical of them, by offering "green" grants. The Salt River Project, which operates the dirty Navajo Generating Station on the Navajo Nation -- one of the dirtiest coal fired power plants in the US -- is giving out "green" grants for solar and wind projects, directly to non-profits and to the Navajo Tribal Utility Authority to disperse.
Since it is human nature not to want to "bite the hand that feeds you," by way of accepting this grant money, those critical of the dirty coal fired power plant industry are quieted, or co-opted into working with this industry.
This dirty coal-fired power plant, Navajo Generating Station, receives its coal from Peabody Coal mine on Black Mesa, where at least 14,000 Navajos were relocated in the so-called Navajo-Hopi land dispute, orchestrated by Peabody Coal, to get at the coal. This power plant and others in the US are a leading cause of the melting of Arctic ice. The result is Native Arctic villages are falling into the sea, and polar bears, walruses and other wildlife are either being displaced or starving to death. Further, the pollution from the power plants on Navajoland causes widespread respiratory and other diseases for Navajos. The media hypes these dirty power plants because they provide electricity to Southwest cities, while many Navajos have no electricity.
Transparency
Native Americans are calling for transparency from non-profits who claim to serve Indigenous Peoples: Make your financial reports, including salaries, travel budgets and grants, public.
brendanorrell@gmail.com
Non-profit financial statements
http://smallbusiness.findlaw.com/incorporation-and-legal-structures/nonprofit-financial-statements.html
Question:
Do 501(c)(3) non-profit corporations have to make their financial statements available to the public?
Answer:
Yes. Non-profit corporations must submit their financial statements, which include the salaries of directors, officers and key employees to the IRS on Form 990. Both the IRS and the non-profit corporation are required to disclose the information they provide on Form 990 to the public. This means that non-profits must make their records available for public inspection during regular business hours at their principal office.
In addition, a number of websites make these financial statements available including GuideStar ( www.guidestar.org ) and the Foundation Center ( www.foundationcenter.org ). Finally, you can request a Form 990 from a specific non-profit corporation by writing to the IRS, including the name of the organization and the tax year you wish to review:
Commissioner of Internal Revenue
Attn: Freedom of Information Reading Room
1111 Constitution Avenue, NW
Washington, DC 20224
at August 26, 2012 No comments: