http://www.rollingstone.com/culture/features/el-chapo-speaks-2016010
What fallout does this have for authentic journalism?

Below: Thanks to Frontera Norte Sur for sharing its work.

In many of the transcendental stories of Mexico, fiction, fantasy and reality cross paths, intertwine and create a whole other story. Something along these lines is happening with the January 8 recapture of escaped drug lord Joaquin "El Chapo" Guzman in Los Mochis, Sinaloa.

Basking in the glow of triumph and congratulated heartily by Washington as well as the governors of Mexico's states, Mexican President Enrique Pena Nieto is celebrating a major victory that was sorely needed after the first three years of an administration that has been marked by scandal, violence, falling oil revenues, and steady peso devaluation.

With Guzman back in custody, the Mexican leader tweeted the words "Mission Accomplished" to millions of his compatriots.  Surrounded by his senior officials, Pena Nieto strode before the cameras later on the day of Friday, January 8, to deliver a brief, prime-time address to the nation.

Mexico's chief executive assured the public that the rule of law was operative and impunity short-circuited. He then departed the stage without taking questions from the press.

A strong current of skepticism runs through public opinion in Mexico concerning the official story of El Chapo's recapture. More than a few citizens refuse to believe that the man presented as detained on January 8 is really El Chapo Guzman, or they hold that the whole affair is a "smokescreen" designed to conceal other pressing problems like the plummeting peso, which reached a new record low against the dollar of 19 to 1 at some money exchange outlets on Saturday, January 9, the day after Chapo's recapture and the President's prime time message to the nation.

The Chapo narrative soon began slipping from the hands of Pena Nieto's administration. On Sunday, January 10, Mexicans woke up to find  the stunning picture of Hollywood actor Sean Penn shaking hands with El Chapo himself splashed across the media spectrum.

The photo was snapped last fall, when Guzman was presumably the object of an intense manhunt after his spectacular July 2015 flight from Mexico's top maximum security prison, and taken as part of a possible movie project about the legendary leader of the Sinaloa Cartel.  Penn's interview with Guzman, facilitated by Mexico-born actress Kate del Castillo, has since been published by Rolling Stone magazine, which had been sitting on the piece for months but hastily ran it after Chapo was recaptured late last week.

Senators Alejandro Encinas (PRD) and Fernando Yunes (PAN), both members of the Mexican Senate's security commission, said they would seek meetings with Interior Minister Miguel Angel Osorio Chong and Attorney General Arely Gomez to discuss Guzman's detention, the complicities of individuals involved in the July escape and the drug kingpin's possible extradition to the U.S.

"The reapprehension of the drug trafficker should not be considered a gain, becuase it was derived from the Mexican State's lack of capacity to keep him locked up," Yunes was quoted in the press. "Now it is necessary to analyze how our system of intelligence failed."

Suddenly, the story has become Kate and Sean and El Chapo. The Mexican press is quoting unnamed sources in the Office of the Federal Attorney General (PGR) that a preliminary investigation of accessory to a crime (El Chapo's evasion of the law) has been intitiated regarding the conduct del Castillo and Penn.

If the PGR does in fact attempt to prosecute the two stars, the issue of El Chapo could convert into one of journalistic and artistic freedom that would command the attention of world media and likely backfire on the Pena Nieto administration, which is preparing for Pope Francisco's widely anticipated visit next month.

In addition to Mexico City, the Obama administration, which wants El Chapo extradited to and tried in the U.S. for drug trafficking, is also not pleased with the Rolling Stone interview.

Some Mexican analysts pose other thorny questions, turning the spotlight on the other side of the border where leads on Guzman's whereabouts might have been collected based on J. Edgar Hoover-like spying of celebrities. For instance, La Jornada's Carlos Fernandez Vega contended that Penn was already tailed by U.S. intelligence due to his dissident views and meetigs with the late Venezuelan President Hugo Chavez.

Now a U.S. citizen, Kate del Castillo is at the heart of the story. The 43-year-old actress has enjoyed a successful career dating from her fame as one of the stars of the smash 1991 soap opera "Muchachitas." She more recently starred in the  popular soap opera "La Reina del Sur," whose plot revolves around a woman drug lord.

Del Castillo stirred up controversy in 2012 when she authored an electronic message to El Chapo.  Declaring that narcos are more trustworthy than politicians, del Castillo composed a message to Guzman that read like a narco-era version of John Lennon's song "Imagine."

In part, the message read:

Wouldn't it be cool if you started to traffic in good, with cures for diseases, with food for street children, with alcohol for old folks' homes?....life is a business, and the only thing that changes is the merchandise, right?"
No to guilt/no to regret/no to shame/no to impunity/no to racial differences/no to politics/no to religion/no to finger pointing/no to silence/no to corruption/no to illicit enrichment/no to smashing our dreams/no more blood/yes to life."

Guzman, who was born into a humble rural family in Sinaloa, apparently liked the message and eventually contacted del Castillo through intermediaries.

If reports that the del Castillo/Penn encounter with El Chapo were among the leads that led to the capo's arrest prove true, it wouldn't be the first time that cockiness and media flirtations preceded the downfall of a Mexican drug kingpin.

Chihuahua/Texas/New Mexico trafficker Pablo Acosta, whose Ojinaga-based operation was a forerunner of the Juarez Cartel, drew the ire of the Mexican government for his interviews with El Paso Herald Post reporter Terence E. Poppa.

Acosta died in a bloody 1987 raid staged by Mexican federal police under the command of Guillermo Gonzalez Calderoni that resembled a scene from a Hollywood script. Gonzalez, who was sometimes called "The Mexican Elliot Ness" and known for his explosive comments on high-level political assassinations south of the border in the 1980s and 1990s,  was gunned down in McAllen, Texas in 2003.

Similarly, the head of Michoacan's Knights Templar syndicate, former teacher and onetime YouTube personality Servando "La Tuta" Gomez, kept himself in the bull's eye of goverment forces as he pumped out a stream of Internet videos and even gave interviews with television and radio stations as if he were running for political office. Gomez was finally captured, and shares the same prison with El Chapo.

Whatever the next twist the Chapo drama plot takes, one thing is certain, as Guzman told Penn: the drug business will continue if I disappear from the scene. The re-imprisoned cartel boss should have added that the associated violence will likely continue.

The weekend after El Chapo's arrest organized crime-style violence flared in different corners of Mexico. In Cuernavaca, two children, including a 9-year-old girl and a 13-year-old boy, were killed when a car they were riding in was shot at by gunmen on January 10. In the Tierra Caliente of Guerrero state, three men were reported killed and at least seven kidnapped when a wedding party was attacked January 9 in a prime opium poppy-growing region torn by conflicts between criminal gangs.

In the port city of Acapulco, four murders late January 9 and early January 10 brought the toll of suspected gangland murders to 31 since the beginning of the new year, according to monitoring from the Guerrero daily El Sur. And in the metropolitan area of Monterrey, seven people were slain late on the evening January 9 in an apparent outbreak of violence between rival street-level drug gangs, according to Nuevo Leon State Prosecutor Roberto Flores. Two of the victims in the Monterrey violence were minors aged 10 and 13, respectively. Twenty people have been reported murdered gangland style in that metropolitan zone since 2016 rolled in. 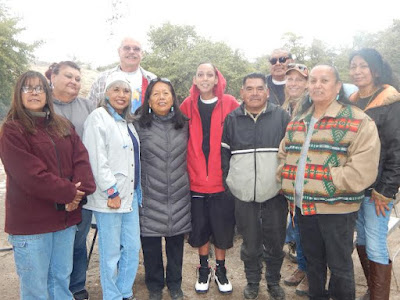 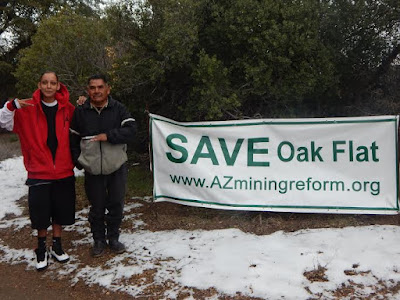 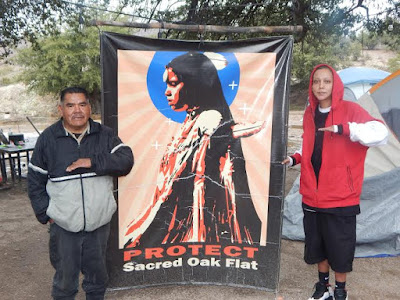 Article and photos by Sandra Rambler

On Jan. 10th, some San Carlos Apaches stood in solidarity with Indigenous Peoples at Chi'Chil'Bilda'Goteel (Oak Flat) to protect their sacred, holy and ancestral lands throughout the continent.  The Protect Oak Flat Bills introduced by Arizona Congressman Raul Grijalva in the House and also introduced by Vermont Senator and candidate for the U.S. Presidency, Bernie Sanders, co-sponsored by Wisconsin Senator, Tammy Baldwin, in the Senate remain on the floor.  Everyone is urged to continue to contact their representatives to continue to support these bills and not let the foreign company Rio Tinto--BHP--Resolution Copper desecrate their sacred, holy and ancestral lands.  Apache tribal elder and spiritual leader, Audrey Johnson says in her native Apache language, "This land is ours!  It belongs to us! Our Creator God gave it to us to take care of it to continue with our prayers and our ceremonies at Chi'Chil'Bilda'Goteel.  This is what was taught to us and this is the teaching we pass on to our children, grandchildren and great-grandchildren.  And I will keep standing up and fighting for what I believe.  It is my prayer that these people that are blinded by greed, corruption and power will open their eyes and leave Oak Flat alone and go somewhere else."
Thanks, Sandra Rambler
at January 11, 2016 No comments: 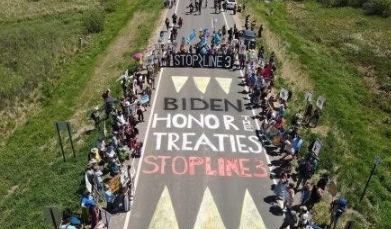