A visit with Carrie Dann and reflections on American Indian Genocide: 'The deliberate and systematic destruction of a people'


February 9, 2016
An open letter to Carrie Dann,
My family and I certainly enjoyed our recent visit with you and your family in Crescent Valley this past December. You are such an inspiration to us that we just had to come and see you. We are aware that for coming generations and for all eternity our people will be able to look back at your life and say, "This is how they criminalized our people and this is how genocide happened. It was not war. It was the deliberate and systematic destruction of a people-- genocide".
The exhibit at the University of Nevada in Reno is very powerful. They have the video, American Outrage playing constantly. All of our people, especially our youth should see this exhibit, if only for the ambiance of seeing your story portrayed as art, history and law in an institution of higher learning.
It was amazing to see one of the bills the government sends you each year. The one for the amount for $5,044,253.23 was dated April 26, 2005. The title of the exhibit, "WHOSE LAND IS IT?" really states the great American dilemma at the heart of the matter. Perhaps you should personally send the government a bill for that same amount which would accrue interest until they address the Treaty of Ruby Valley of 1863. The elephants in every American courtroom are the hundreds of treaties which were made with the Indians and which they continue to ignore. It was interesting to hear you say that you didn't think you were trying to sue the government for the last thirty years, you were just trying to get your treaty enforced.
I was able to order a copy of the five million, forty four thousand, two hundred and fifty three dollar bill from the University of Nevada Special Collections Department and plan to enlarge it into poster size. I believe it perfectly illustrates the colonizers criminalizing the landowners.  Another good title for the exhibit would be, "Are Treaties the Supreme Law of the Land?"   In your trek through the U.S. court system , you kept hearing, "The Indian Claims Commission determined this, and the Indian Claims Commission found that".  What I would like to know is, how is a panel of cowboys deciding the fate of the Indians, due process of law?
Thank you for everything and most of all for saying that you will never accept any of their blood money.
Your fellow board member,
Steve Melendez
American Indian Genocide Museum 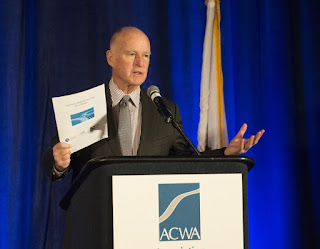 By Dan Bacher
Censored News
The year 2015 will become infamous as the one when many California fish populations reached record low levels, largely due to poor water management by the state and federal governments.
The Bureau of Reclamation and Department of Water Resources continued to drain Trinity, Shasta, Oroville and Folsom reservoirs to record low levels during a record drought to supply subsidized water to corporate agribusiness interests, Southern California water agencies and oil companies conducting fracking operations.
The good news in an otherwise disturbing outlook is the first El Niño storms that arrived at the end of the year to start recharging reservoirs depleted due to mismanagement by the agencies.
Read more »
at February 10, 2016 No comments: 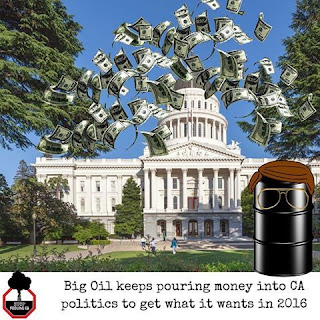 The oil industry spent a record $22 million lobbying California legislators and officials last year, allowing it to largely determine which bills passed and which bills didn't pass through the Legislature.

This "gusher" of lobbying money in 2015 yielded alarming results: every environmental bill opposed by Big Oil was shelved, or in the case of SB 350, a climate change/green energy bill, was amended under pressure from the oil industry.
The 2015 lobbying brought the total expenses by the oil and gas industry to a whopping $127 million over the past 10 years, according to a report from the American Lung Association in California written by Will Barrett. The report data is obtained from the annual reports filed with the California Secretary of State. (www.cadelivers.org/...)
The record $22 million spent amounts to $60K spent per day on oil lobbyists.
The Western States Petroleum Association (WSPA) spent a record $11 million ($10,949,150) on lobbying, making it the number one spender in California for the fourth year in a row. Of the WSPA's $11 million, $9 million - 82% - was reported in the uncategorized "other" spending category.