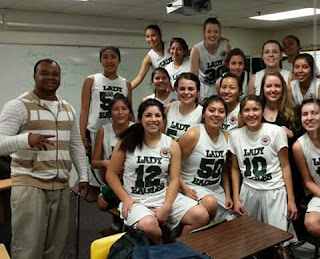 FLAGSTAFF-Members of the Flagstaff Lady Eagles basketball team were asked to take their hair down from their traditional tsiiyeeł before a game on Tuesday night at the Flagstaff High School gymnasium.
The Lady Eagles were participating in Native American culture night which was planned by the Lady Eagles Basketball Booster Club and coincided with their game against the Greenway Demons.
The referee who called for the girls to take their hair down cited the Arizona Interscholastic Association (AIA) rulebook regarding 'hair control devices'. The referee questioned whether the hair ties posed concern as a safety hazard. He then called for the girls to take their hair down.
President Russell Begaye said that Navajo people are very enthusiastic in supporting high school sports as many have children who participate. They come from near and far to watch their team's plight, he said.
"I watch quite a number of sporting events including both boys and girls basketball. At many of the games, you'll find girls teams wearing ribbons to support a cause or to show team pride. Our Navajo athletes should never be punished for expressing pride in their culture or who they are."
The President went on to say that referees who officiate games involving Navajo teams should undergo cultural sensitivity education.
"In fact all non-Navajos that are refereeing games in Northern Arizona should be required to take sensitivity training so that this type of blatant discrimination does not happen on the Navajo Nation to our tribal students. This includes border towns."
Flagstaff High School Principal Tony Cullen said he contacted the Regional Director at AIA to dispute the interpretation of the ruling.
"The interpretation of this rule was way off. When I found out about it, I was fuming," he said. "I remember watching the Page High School girls play at the state championships with their hair tied up traditionally."
President Begaye encourages students to continue to have pride in their culture and said that officiating against expressions of cultural pride in a scholastic setting is fundamentally wrong and discriminatory.
President Begaye said he will file a letter of protest addressing this matter with the AIA.
###
at February 04, 2016

I hope they win this is an insult to these ladies who are history makers and world changers. The fact that they were told to do this is so wrong. I I had something like that happen to me I would go and tell them off like crazy!like I said I hope they win and get an apology while at it!