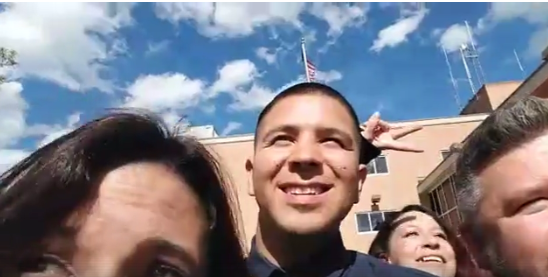 Prolific the Rapper after 'not guilty' verdict


Below: A Tribe Called Red Music Video by Prolific The Rapper 'Black Snakes'


Censored News
Aaron Sean Turgeon, also known as ‘Prolific the Rapper,’ faced three charges today regarding piloting a drone at a NoDapl (NO Dakota Access Pipeline) demonstration site. After 30 minutes of reviewing evidence Judge Schlaumberger, former Supreme Court Justice who was hired to oversee some of the water protector cases, retired his opinion and returned to the bench to declare Turgeon innocent on all counts.
Turgeon was charged with misdemeanor reckless endangerment for flying his drone over a crowd of 150 to 200 people. Law enforcement claimed Turgeon put them and the people at risk of injury or possible death by his actions. Turgeon was also accused by law enforcement of operating his drone over 400 feet, claiming he was in proximity of a Highway Patrol aircraft. Another charge Turgeon faced was a misdemeanor physical obstruction of a government function charge after he did not allow law enforcement to seize his drone.
“Thank you to the water protectors that day who with their cameras formed a circle around me and kept Officer Shannon Hinkie from taking my drone. If it wasn’t for them doing that I wouldn’t have video evidence to prove that I was innocent,” said Turgeon in an online video he posted to Facebook. “I also I wanted to thank the judge because he was fair with my case and I want to encourage all of the other judges to start being fair because a lot of the time what you’re being shown by the police officers is not true and I knew it but it’s not about knowing it, it’s about proving it and we proved it today.”
Lead counsel and WPLC cooperating attorney Doug Parr from Oklahoma City exclaimed:
“Aside from the fact that we had a very thorough and fair judge in this case that made a huge difference! A lot to the basis for the success in the case today was the support of the water protectors and our client Sean’s video evidence that exposed the falsehoods in the state’s case. One of my concerns is that the charges in this case were fabricated to justify the no-fly zone that was imposed in late October of last year.”
The no-fly zone impeded independent media ability to document the conflict between water protectors and law enforcement during late October and early November.
“Needless to say, I am immensely proud of my client, Mr. Turgeon, who was willing to stand up and speak truth to power in this case. I’m so happy he and his family no longer have this hanging over their heads.”
In agreement with Parr, WPLC cooperating attorney Danny Sheehan said:
“The police officers were clearly coached by the State’s Attorney to fabricate evidence contrary to the facts by falsifying affidavits on their reports in support of their preliminary hearings. In doing so, this forced water protectors to trial on clearly false charges regarding the flying of drones over demonstration areas and wanting drones to be grounded in support of a no-fly zone order granted by the FFA.”
If Turgeon was found guilty he was facing up to seven years in prison.
“…We need the other judges to be fair we need the records to open up for all of the water protector cases so that they can examine all available video,” said Turgeon.
With weekly last-minute trial cancellations that water protectors have encountered by the Morton County State’s Attorney Office, along with cases being dismissed and met with new charges unless a plea bargain is taken, the victory today is a refreshing turn of events for water protectors and their attorneys.

If you are a water protector and need legal assistance, please call the WPLC Hotline at (701) 566-9108.
If you need travel assistance returning to North Dakota, contact the Freshet Collective at (605) 519-8180.