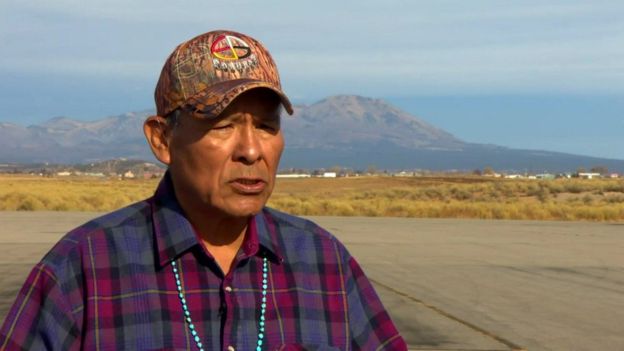 By Brenda Norrell
Censored News
Dineh Utah Mark Maryboy, former Navajo Nation Councilman and San Juan County Commissioner, suggested President Trump is mentally ill, during an interview with the global news media BBC.
Maryboy's comments came as Indian Nations filed multiple lawsuits to protect Bears End this week and potesters filled the streets in Salt Lake. They blocked streets, and screamed obscenities at Trump, telling him to go home, as Trump gutted Bears End for the purpose of mining and destruction.
Maryboy told BBC that since the Mormons first arrived on Dineh lands, there has been destruction.
"Since the day they came it's been destruction, destruction, looting, looting, looting."

Mr Maryboy is scornful of Mr Trump, suggesting he is mentally ill.
"This is a struggle since the day the white people came here," he adds.
Several organisations have joined the Native American tribes in fighting against the decision to scale back the national monuments. And thousands gathered in Salt Lake City this weekend to voice their opposition to any attempt to change the designation of the parks.

About Mark Maryboy
Mark Maryboy (born December 10, 1955) was an American politician for San Juan County, Utah, and a former Navajo Nation Council Delegate for the Utah Navajo Section of the Navajo Tribe. He is the brother of Kenneth Maryboy who currently serves in the positions he once stood. Mark is of the Navajo Indian Tribe.
Mark Maryboy was also the San Juan County, Utah Commissioner for District Three who saw to the needs of the county's residents and the Utah Navajo Element. He made history when he was elected in 1986 as the first Native American county commissioner in Utah's history.
https://en.wikipedia.org/wiki/Mark_Maryboy
at December 05, 2017