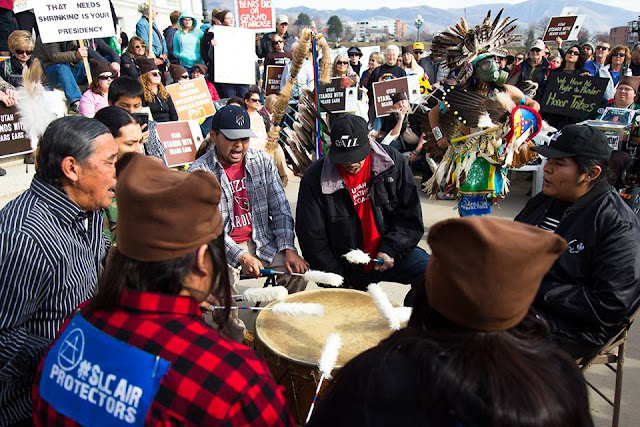 The systematic seizure of the world's resources is being accelerated by Donald Trump and the global elite, as Trump names Jerusalem as Israel's capital and U.S. trained assassins are deployed in Honduras. These come as Trump gutted Bears Ears pristine wilderness lands in Utah for mining and destruction this week.
As the gluttony for money, resources and power spiral out of control by a mentally unstable U.S. president, and the global elite, the actions of the people accelerate, as they rise up in defense of the land, water and air, and their fellow human beings.
Ms Magazine features one of those rising up, Casey Camp Horinek, Ponca, and the fight against the Keystone XL Pipeline.
Grand Canyon Trust explains why Trump's decision to gut Bears Ears and Grand Staircase  lands are a monumental mistake.
In Germany, pilots have grounded 222 flights and refuse to return asylum seekers to Afghanistan.
In Vermont, a new film is being shown of Water Protectors at Standing Rock, by longtime filmmaker Fidel Moreno.
The UK Independent reports, 'Donald Trump is 'declaring war' by naming Jerusalem Israel's capital, says Palestinian official. He is declaring war against 1.5 billion Muslims [and] hundreds of millions of Christians'
Donald Trump would effectively be declaring war in the Middle East if he recognises Jerusalem as Israel's capital, the Palestinians' chief representative to Britain has warned.
Manuel Hassassian said it would be the "kiss of death" to the peace process.
"If he says what he is intending to say about Jerusalem being the capital of Israel, it means a kiss of death to the two state solution," Mr Hassassian said in a BBC radio interview.
http://www.independent.co.uk/news/world/middle-east/jerusalem-donald-trump-israel-capital-palestinian-authority-manuel-hassassian-netanyahu-a8094336.html?amp

As Honduran police are firing live ammunition at protesters, The Intercept reports: 'President of Honduras deploying U.S. trained forces against election protesters.'
Several observers on the ground told The Intercept that they have seen elite military police from the TIGRES and Cobras units alongside the Honduran National Police involved in clashes with protesters in the capital, Tegucigalpa, and around the country. The three forces are increasingly coordinated as the violence soars, they say.
https://theintercept.com/2017/12/03/the-president-of-honduras-is-deploying-u-s-trained-forces-against-election-protesters/

Meanwhile, pilots in Germany have taken a moral stand. The UK Independent reports that pilots have refused to fly asylum seekers back to Afghanistan.
Pilots have stopped 222 deportations of asylum seekers from Germany by refusing to take off with them on board.

Many of the pilots refused to take control of flights taking people back to Afghanistan, where violence is still rife following years of war and occupation by Western forces.
One of the airlines involved said pilots made the decisions on a "case-by-case" basis if they believed "flight safety could be affected".
http://www.independent.co.uk/news/world/europe/german-pilots-refuse-deport-asylum-seekers-lufthansa-angela-merkel-migrants-a8092276.html
As the collapse intensifies, so does the resistance. MS features Casey Camp Horinek, Ponca grandmother, in fight against Keystone XL
Casey Camp-Horinek is a Ponca Nation Councilwoman, elder and long-time Indigenous rights and environmental activist currently fighting on the front lines of the movement to stop the Keystone XL pipeline—an oil pipeline proposed from the Western Canadian Sedimentary Basin in Alberta to refineries in Illinois and Texas.
Camp-Horinek has spoken on panels and at marches and protests around the globe—calling for a reimagining of our relationship to other humans and the Earth, as well as an awakening to the capacity we all have to speak out and care for Mother Earth in a balanced way. As an actor, she is known for her work in Share the Wealth, Running Deer and Barking Water.
http://msmagazine.com/blog/2017/11/13/women-speak-casey-camp-horinek-a-great-grandmother-leading-the-fight-for-indigenous-and-environmental-rights/
The Standing Rock Camps Water Protectors continue to inspire the world. A new documentary in progress by Fidel Moreno will be shown in Vermont.
Oscar-nominated director Fidel Moreno will present a free screening of his documentary work-in-progress, “Standing With Standing Rock,” at Brooks Memorial Library, 224 Main St, Brattleboro on Friday, Dec. 8, at 6 p.m.
“Standing with Standing Rock” was shot on location, and chronicles the story of the protesters at Standing Rock and their connection to the history of the American Indian Movement on their treaty-given lands of the American west. It has been culled from 18 hours of interviews with 33 people at Standing Rock, including youth, mothers, grandmothers, grandfathers, First Nation people and non-Indian supporters.
Don’t miss this opportunity to see this important work by Fidel Moreno, whose other documentaries include “Wiping the Tears of Seven Generations,” and “Peyote Road.” A question and answer session with the director will immediately follow the film.
http://www.sentinelsource.com/hub/news/community_news/work-in-progress-documentary-on-standing-rock-to-be-screened/article_3d6f0ff0-9f5b-5f27-a5c6-83e79c5addb7.html 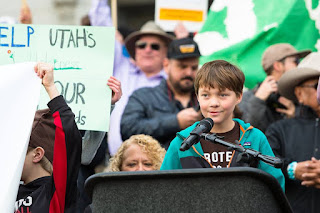 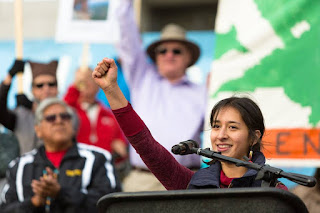 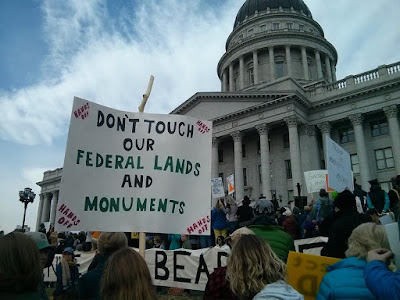 Today’s attack on Bears Ears and Grand Staircase comes after Interior Secretary Ryan Zinke’s deeply flawed and opaque monuments review process conducted over the course of just a few short months. In many cases, the efforts to protect these places through monument designation took years and even decades.
Zinke delivered his final recommendations to the White House on August 24, 2017 and in the culminating example of the concealment that stained the entire process, kept his recommendations secret. The draft recommendations were leaked in September, but he has yet to make his final recommendations public.
During his review, Zinke “pardoned” several of the 27 monuments on the hit list. Speaking on some of the monuments he recommended be left alone, Zinke said of Canyons of the Ancients, “The history at this site spans thousands of years, and the federal protection of these objects and history will help us preserve this site for a thousand more years.” He said of Craters of the Moon, “As a former geologist, I realize [this monument] is a living timeline of the geologic history of our land.” And he said that Grand Canyon-Parashant represents “the scientific history of our earth while containing thousands of years of human relics and fossils.”
Grand Staircase and Bears Ears national monuments contain all these qualities and more. They are more than a stunning record of thousands of years of human history, magnificent scenery, geology, and a treasure trove of fossils and dinosaur bones. They are our shared natural and cultural heritage. Secretary Zinke’s recommendations and President Trump’s actions are nothing more than an attempt to tear down the legacy of their predecessors at the expense of future generations.
Americans want to see our parks and monuments strengthened for future generations, not eviscerated for short-term gain by fossil fuel and uranium mining interests. 99.2 percent of those who commented during the national monuments review said so.

You may have heard from Trump administration officials that the areas whose protections within national monuments were gutted today are already protected. While some areas are Bureau of Land Management Wilderness Study Areas, these kinds of designations were never intended to be permanent like national monuments are. Many places in Bears Ears, including hundreds of thousands of acres of national forest that were cut, have no such protections, and are loaded with irreplaceable cultural resources that now are vulnerable to looting, energy development, and other projects that destroy cultural sites.
In order to permanently protect public lands, either Congress or a president must act to convert temporary protections to permanent protection like national monuments or wilderness. But the Utah congressional delegation has proven itself virtually incapable of writing and passing legislation that actually protects public lands. Utah still has less designated wilderness than any other Western state. When the Trump administration tries to sell you the idea that these places are still protected, don’t buy it. President Trump has removed protections for Utah’s oldest rock art site near Bluff, for the northernmost great house village site from the Chaco era in Utah, and for countless other important cultural sites.