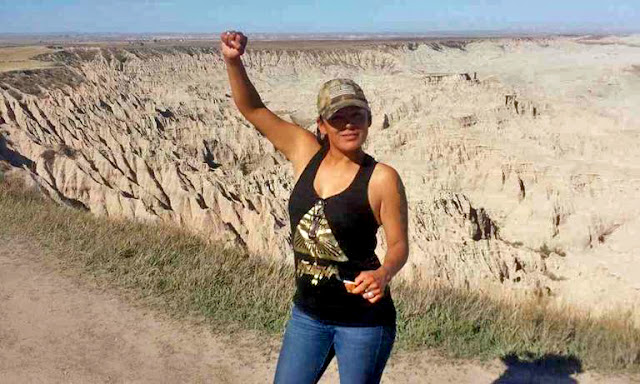 By Water Protector Legal Collective
Censored News
Posted on December 14, 2017
BISMARCK, North Dakota -- Federal defense attorneys for Red Fawn Fallis filed a Motion to Compel Discovery yesterday in the District of North Dakota. The motion outlines numerous videos and other crucial documentary evidence that have been requested by defense but not provided by the government.Among the documents that the government has not produced are details related to the role of the paid FBI informant who owned the gun that was allegedly recovered at the scene of Ms. Fallis’s arrest. The existence of this informant was first addressed publicly at the end of a Motions hearing on Monday December 11, and is also described in a recent article by The Intercept. According to the motion, the requests left unanswered by the government include:A detailed request for documents and other information relevant to the government’s use of a paid FBI informant who infiltrated the Water Protector camps, established an intimate relationship with the defendant herein, and provided contemporaneous information to the government. This informant was an eyewitness to Ms. Fallis’ arrest and the discharge of a firearm. . . . [and] the revolver that was allegedly seized from Ms. Fallis at the time of her arrest, belonged to the government’s informant.Defense has also sought:A detailed request for documents and other information relevant to additional informants utilized by the government, the State of North Dakota, police agencies involved and/or DAPL and/or its agents.This motion comes only days after the conclusion of a hearing on defense Motions to Suppress, where attorneys presented evidence demonstrating that law enforcement had no probable cause to arrest Ms. Fallis. Law enforcement testimony during that hearing confirmed the existence of at least one additional informant, undercover officer or security contractor who was providing information to law enforcement. The hearing also produced evidence confirming the existence of numerous cameras mounted on law enforcement vehicles or operated by officers, for which audio or video have not been produced by the government as required by law.Ms. Fallis was arrested on October 27, 2016 and is charged with Civil Disorder, Discharge of a Firearm in Relation to a Felony Crime of Violence, and Possession of a Firearm and Ammunition by a Convicted Felon. “Civil Disorder” is a rarely used statute that criminalizes participation in a public disturbance and has historically been used primarily against political activists and communities of color. The Motion to Compel demands that the government disclose if any of the “violent acts” that form the basis of the Civil Disorder charge were instigated by paid informants, undercover officers or private security.Ms. Fallis is represented by attorneys Molly Armour, Jessie Cook and Bruce Ellison and is scheduled for trial on January 29, 2018 in United States District Court for the District of North Dakota in Fargo. She was incarcerated without bond for one year and is currently confined to a halfway house as she prepares for trial.Red Fawn Fallis, a Lakota Sioux woman, is one of seven federal defendants with cases arising from the events of October 27, 2016 at Standing Rock, and she will be the first to trial. Over 300 Water Protectors are still awaiting trial in their state criminal cases.
Links:
Defense Motion to Compel Discovery (December 13, 2017)
The Intercept article: An Activist Stands Accused of Firing a Gun at Standing Rock. It Belonged to her Lover – An FBI Informant. (December 11, 2017)
Red Fawn’s Support Committee
*This statement or portions thereof not quoted from court documents may be attributed to: Water Protector Legal Collective.
Water Protector Legal Collective (WPLC) provides on-the-ground legal representation and coordination for Water Protectors engaged in resistance to the Dakota Access Pipeline at Standing Rock, ND.