As Dakota and Lakota rode in honor of those hanged and massacred, Palestinians were murdered and imprisoned because of the reckless announcement of Trump.

Morton County used the Nobel Peace Prize Forum to meet with the Norwegian Mineral Industry, which controls coal and other mining, and to discredit the media's coverage of Standing Rock Water Protectors.
Standing Rock Water Protectors said a self-appointed mediator, Stephanie Hope Smith, acted without any authority when she invited Morton County Commission Chairman to the Nobel Peace Prize Forum, where Water Protectors were representing Chief Arvol Looking Horse.
Further, Standing Rock Water Protectors said Smith was "thrown out of camp twice" for bringing in Morton County during the resistance to Dakota Access Pipeline at Standing Rock in 2016.
Further, a report reveals that Smith took a visiting Native delegation to meet with the joint command -- comprised of multiple law enforcement agencies -- during the Standing Rock resistance in October of 2016.
Water Protectors said she acted without any authority. Among the topics discussed with the joint command was the arrest of Red Fawn Fallis, charged with firing a gun at officers. The revolver actually belonged to FBI informant Heath Harmon of Fort Berthold, North Dakota, who engaged in a relationship with Red Fawn in camp, and continued to deceive her while she was in jail. The notes from Harmon's misconduct and deception, while Red Fawn was jailed, were given to the prosecutor, reports The Intercept.
Dakota Lakota Delegation Ambushed at Nobel Peace Forum Ambushed by Self-Appointed Mediator
At the Nobel Forum, Smith described herself as a "sacred site and cultural conciliator." Previously, she described herself as "natural mediator," registered with Morton County.
The Nobel Forum said Smith is responsible for bringing  Morton County Commissioner Cody Schulz to the Nobel Peace Prize Forum this month, in December of 2017, in Norway.
Morton County's violent, brutal assault on Water Protectors
Morton County was responsible for the violent, brutal assaults on Standing Rock Water Protectors, by local law enforcement, and militarized police from throughout the country.
Water Protectors were shot with rubber bullets and tear gas and water cannons in freezing temperatures. Women and elderly were arrested, strip searched and jailed in "dog kennels" with numbers written on their arms as was done by the Nazis.
Numerous Water Protectors suffered serious injuries, as they stood peacefully to protect the water of the Missouri River from the Dakota Access Pipeline, owned by Energy Transfer Partners. About 800 were arrested and many continue to face charges.
Morton County used Nobel Forum to meet with mining industry, discredit media coverage of Standing Rock
Morton County Commission Chairman Cody Schulz released a statement saying that he met with the Secretary General of the Norwegian Mineral Industry while at the Nobel Forum.
Schulz said this mining contact was made possible by way of the Nobel Forum sponsor -- the global non-profit Peace Through Commerce.
Further, Schulz criticized the national and international media coverage of the pipeline resistance. Schulz said he presented Morton County's opposing view of Standing Rock while at the Nobel Forum.
“My goal was to make sure that all of the facts of the situation were properly understood and the perspective of local landowners, law enforcement, and emergency responders were represented because I believe the media, especially at the national and international level, did a very poor job reporting that side of the story,” said Schulz. “I was really quite impressed with PTC’s approach of multi-sector, multi-level engagement that looks at values, causes, and effects.”
Chief Arvol Looking Horse responds
Last Real Indians exposed the role of Smith and published a response from Chief Arvol Looking Horse.
Chief Arvol Looking Horse said he asked Water Protectors to represent him at the Nobel Forum in Norway, because he was unable to attend. The delegation of Dakota Lakota Water Protectors were unaware that Smith had intervened and included Morton County at the Nobel Forum.
Chief Arvol Looking Horse said, "I feel responsible for putting my friends and relatives in a situation where they were unaware of the Commissioner’s attendance because I asked them to attend on my behalf. This uncomfortable situation has jeopardized the reputation and safety of my friends and relatives that attended, as well as myself."
Read more at Last Real Indians:
https://lastrealindians.com/oceti-sakowin-nobel-peace-prize-forum-attendees-speak-out/ 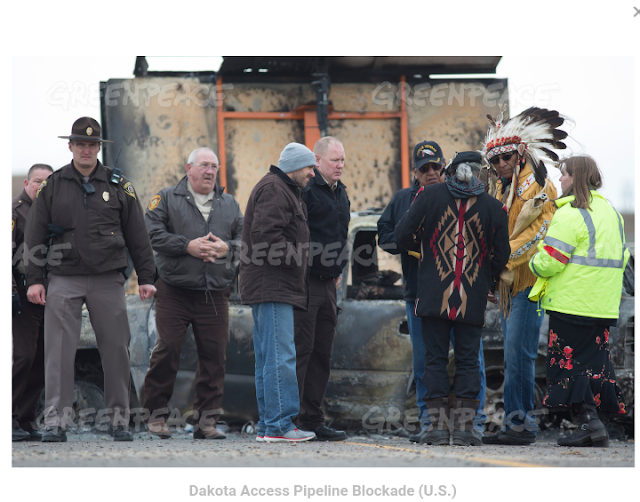 Please check back for updates on this breaking news story from Censored News.