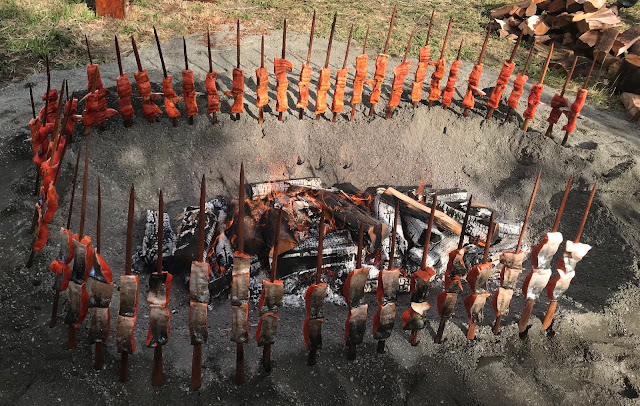 The Hoopa Valley Tribe (Tribe) today announced that it will file a lawsuit within 60 days unless federal agencies reduce the numbers of Endangered Species Act (ESA) listed Klamath-Trinity origin Coho salmon being killed in the Pacific Ocean. Klamath River origin Coho salmon have been listed as a ‘threatened species’ under the ESA since 1997.  Without analysis or formal ESA re-consultation, regulations of the Pacific Fishery Management Council (PFMC) were changed this year to allow more Coho salmon to be injured or killed, although they are protected by the ESA. “We will not stand by while the federal agencies kill our salmon,” said Hoopa Tribal Chairman Ryan Jackson. “Some of those fish would have returned to the Klamath and Trinity Rivers. The Bureau of Reclamation cannot kill young Coho salmon in our rivers nor can the PFMC use regulations which kill the returning adult Coho salmon in the Pacific Ocean,” he said.
In April 2018, the Tribe warned U.S. Commerce Secretary Wilbur Ross by letter that the PMFC was proposing to increase its allowances for killing and maiming Coho salmon which are incidentally encountered in ocean fisheries targeting Chinook salmon. Both species of salmon are present in the ocean’s Klamath Management Zone during the summer and the killing of Coho there is called an “incidental take.” However, Ross simply approved the PFMC’s proposal without bothering to request more thorough analysis of the impact to Coho, a violation of the ESA. That analysis is required because the new method for estimating Coho impacts and the related regulations were not considered in the applicable 1999 Biological Opinion assessing impacts in PFMC-managed ocean fisheries.
Adverse impacts to the ESA-listed Coho that result from excessive incidental take of Coho in ocean fishing directly impair and injure the Tribe and its sovereign, legal, economic, and cultural interests. Today’s notice that the federal agencies are violating the Endangered Species Act warns that a federal lawsuit will be filed after 60 days.
For further information, please contact Mike Orcutt, Hoopa Fisheries Director, at 530 625  4267 - Extension 1013.
at July 19, 2018