Migrant Rights Activist Climbs Statue of Liberty on the Fourth 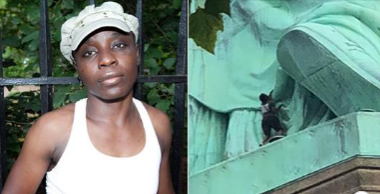 Therese Patricia Okoumou, 44, climbed the Statue of Liberty on the Fourth of July to protest Trump's intolerance of migrants and theft of their children. Rise and Resist told The New York Post that she managed to make it up to the feet of Lady Liberty all on her own — without ropes or climbing gear. A Native of the Congo, the longtime activist and personal trainer is described as a total "bad ass."
Read more:
https://nypost.com/2018/07/04/statue-of-liberty-climber-identified-as-immigrant-activist/
Posted by Censored News, publisher Brenda Norrell at July 05, 2018