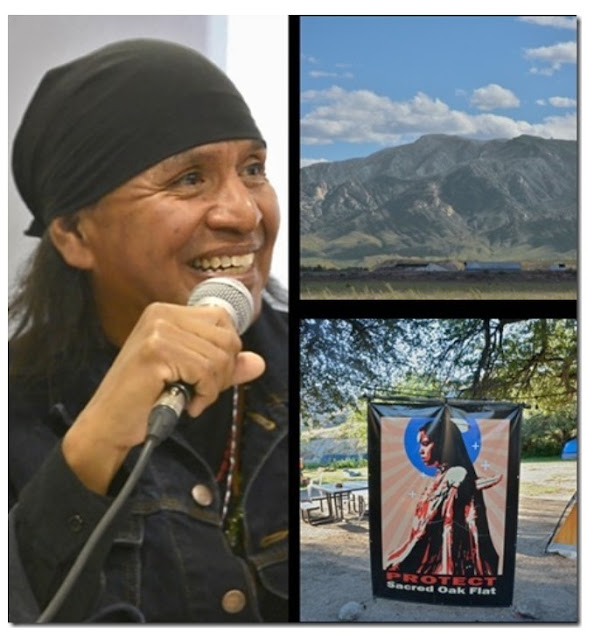 This is the second part of Wendsler Nosie Sr.'s speech, at the gathering organized for him in Paris by the CSIA, on March 23rd 2019. The division in several part is mine, from a publishing point of view, it is neither Mr. Nosie's choice, nor that of the CSIA. (See First Part).

Transcript by
Christine Prat, for the CSIA
Censored News
English and French

PARIS --Wendsler Nosie Sr. had concluded, in the first part of his speech in Paris, "In 2006, is when we began to change our world". Then he went on:

"Prior to that, in the 1980's, we had the Mount Graham issue, our sacred site that was being under attack. This huge mountain, in the way we can identify to the way people describe things, is not different than Mount Sinai. And the elevation of the Mount almost reaches 12000 ft, in the desert. So, we had people who came here to Europe, from America, with several members of the tribe."
"On Mount Graham, they were going to build 32 telescopes. And there were numbers of major universities in America involved. And then, in Europe, were Germany and Italy involved. So, the people made their trip here. I know a lot of these people are gone now, and I know they were very thankful to the organizers in France. It spread the word in Europe. I don't know if you know, but by France being involved in helping in the issue, it made Italy and Germany have to carry the story in Europe. They had to start defending themselves. So, in America, as it became a world issue, 8 years later we found out that the United States Airforce was involved in building a telescope in the middle of the rest of the telescopes. And it had to do with lasers. The plan for the United States was to use the satellites, by using the lasers, because the next great weapon is lasers. So, the United States had to build the project before the rest of the world found out about the lasers. And they were able to do this by giving what is in the federal government called 'an exemption from law'. There are laws to follow but why did they exempt it from all federal laws? Why? "
"Ok, I am going to leave that story right here for now."
"So, let me come to Oak Flat. In 2002, the argument started about another holy place of us. And it had to do with mining. The company in America is called Resolution Copper. But they are a subsidiary of Rio Tinto [a Canadian company]. So, the same action was taken, the federal government gave an exemption again. So, a light went off! Because of Mount Graham, because Mount Graham had different countries involved and a possible military project. So now, at Oak Flat, they gave an exemption. If you work at the federal government, there are laws to follow before any land is transferred. All Americans are subject to the law. So, why did the United States Congress give an exemption from all these laws to a foreign company?"
"So, when I got into it more, as I did for Mount Graham, we found that 75% of the minerals that will be taken from this land, will be coming to Europe. Then, we also found that, in the property rights, 4% will be hold by China. There are two main minerals in this holy place. One of them is uranium, and that's going to be sold to China, and China was going to sell that to Iran. And the other mineral has to do with cleaning military weapons. So, this is what brings me to Europe again. This is what our people face."
"What's crazy is that those minerals sit in our holy mountains. These holy places are our language, our ancient songs, our ceremonies. So, our children, like my grand-daughter [he points at a poster of Naelyn Pike], their argument is 'in America, if somebody doesn't quite believe the Bible, they can come to this side of the world, and see the references of where the Bible comes from, the holy places [sic, see note below]. They can come back. But like you saw in the video, the open pit, with copper, that's what is going to happen to our holy mountain.' From the ones before me to my parents, to me, we had the opportunity to touch these holy places. So, my grand-daughter touched this place. But she is not ready to have a child yet, but I am sure it will probably happen in 5 years. And Resolution Copper is ready to take this place from us in 2020. So, this is where our children say 'Why do they still assume we are different?' Then, they say 'they came to America to express freedom of religion, and our military fight for freedom of speech', so, they ask me, 'Why destroy ours?' "
"From everything that I know, and I am not afraid to say this in America, I have already said it to Congress – most of the leaders in America – 'then let's be truthful, America was founded on deception'. You can't build anything on a foundation that is not there. So, the only way we are going to fix America, is go back to the beginning. I have told most of the religions in America 'you always go to the second chapter, but you never go to the first chapter, which is the Indian people. So, you are still misled, the whole people of America', and then also probably the world, and it is a great deception."