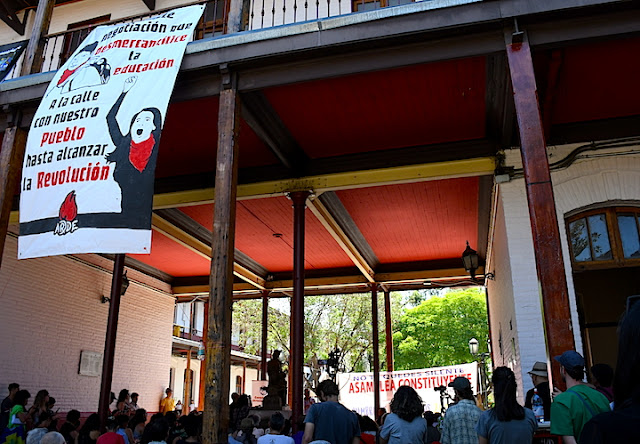 PHOTOS: CUMBRE DE LOS PUEBLOS–PEOPLE’S SUMMIT AGAINST NEOLIBERALISM AND FOR A PLURINATIONAL CHILE

Posted on December 6, 2019 by Anne Petermann

All photographs by Orin Langelle

Monday 2 to Saturday 7 December,
University of Santiago de Chile
https://globaljusticeecology.org/photos-cumbre-de-los-pueblos-peoples-summit-against-neoliberalism-and-for-a-plurinational-chile/
Global Justice Ecology Project and Biofuelwatch attended and presented at this important event, planned when the COP25 UN Climate Summit was still scheduled to take place in Santiago. The statements and workshops at the Cumbre were very radical and focused on identifying and addressing the root causes of the crises we are facing and strongly opposes the neoliberal false solutions we are being confronted with. Thanks so much to our allies at OLCA for inviting us to take part in this powerful event.

No Commodification of Nature
–

The Peoples Summit, which is convened year after year, brings together organizations and social articulations from various territories and sectors of the world to share experiences and promote alternative solutions to the system and strengthen global organization and local action to curb the socio-environmental catastrophe.

This year, Chile was going to be a global focus for two international events of the greatest relevance: the Asia-Pacific Economic Cooperation Forum (APEC) in November, which would bring together economic and government leaders from major world economies (including the US and China), to deepen the inequality, poverty and pollution generated by the current system; and the Conference of the Parties (COP25), in December, which would bring together representatives from 197 countries of the world that are members of the United Nations, to take agreements on actions that must be carried out to curb Climate Change, meetings that have failed for 25 years ensure the change of course of the world’s economies and policies to protect and guarantee the survival of the human species.

Both were suspended because, precisely, Chile was a world focus, but for other reasons: the Chilean people rose to the social, economic and environmental crisis they suffered and since Friday, October 18, there exists a situation of strong national unity with large protests and popular organization, which has been brutally repressed by state forces.

Attendees discuss the need for a new Constitution. The old Constitution is a leftover from the Pinochet dictatorship.
In this new scenario, the responsibility and need to carry out the People’s Summit is more current and necessary than ever.

Discussion from one of the many workshops. All of the workshops were held in rooms named after assassinated environmental and Indigenous activists.

Inside the Women’s Tent

Inside the Women’s Tent

The Cumbre began with dance…

…and the dance was a protest to the neoliberal model

NO PERSECUTION AND MURDER OF ENVIRONMENTAL DEFENDERS