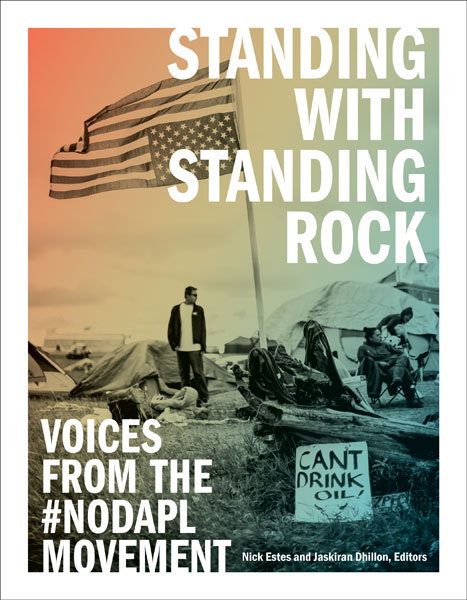 Standing with Standing Rock is more of an encyclopedia than a book. The pages of references are a sort of road map, not just of a roadmap through the book, but a road map through time, and specifically through the time when Standing Rock camps were alive, pulsing with life, and giving birth to revolution and movement.

The details of the movement flow in these references like arteries. The words, stories, and news that followed Standing Rock are arteries of this mighty heart of Standing Rock, and those that preceded the camps were veins, carrying lifeblood to the heart of this movement.

Still today, the Standing Rock movement is pulsing, each day, with the cry of "Wni Wiconi," Water is Life,  somewhere.

Standing with Standing Rock, Voices from the #NODAPL Movement, edited by Nick Estes and Jaskiran Dhillon, published by the University of Minnesota Press, is also a roadmap to the world, the world of Indigenous resistance.

"It is prophecy," the editors begin. "A great Black Snake, Zuzeca Sapa, will spread itself across the land, bringing destruction to the land, the water, and the people."

With these words, editors Estes and Dhillon begin this monumental story, with a reminder of how a rupture of the Dakota Access Pipeline would mean catastrophe for those who depend on the Missouri River for their drinking water and a reminder that with this threat also comes hope.

There is a beauty in the words, just hearing the names of the camps again: Oceti Sakowin Camp, Sacred Stone Camp, Rosebud Camp and Red Warrior Camp.

The words within the book also signal road markers along the way that point the way. There were the Native youths who ran to Washington D.C. and then there were the militarized police with their "ritualistic brutality of tear gas, pepper spray, attack with dogs, water cannons, disinformation campaigns, and twenty-four-hour surveillance."

For the most part, it was social media that broadcast the breaking news and it was The Intercept that exposed the private security TigerSwan, the spin masters for Morton County Sheriff's Department and the militarized police.

Rooted in atrocities in Afghanistan and operating behind the closed doors of the U.S. multi-agency Fusion Center, TigerSwan pressed for a warzone at Standing Rock. Operating without a license in North Dakota, TigerSwan seeded its own form of terror, with the aid of the misinformed and gullible mainstream media, and the racist media in North Dakota. TigerSwan operated as the puppet masters of the Morton County Sheriff's office and the militarized police who critically injured many Water Protectors.

Regardless of the aerial surveillance, private security corporations and militarized police, Water Protectors stood, and remained in freezing temperatures throughout the winter until February of 2017.

"The movement reignited the fire of Indigenous liberation and reminded us that it is a fire that cannot be quelled. It provided, for a brief moment in time, a collective vision of what the future could be," writes editors Estes and Dhillon.

"We waited for this," writes Sarah Sunshine Manning, Shoshone Paiute.

Lewis Grassrope, from Kul Wicassa Oyate, the Lower Brule Sioux Tribe, shares the history of the name Oceti Sakowin, which was the main camp, the Seven Council Fires. Grassrope also discusses both the traditional and IRA tribal governments.

Reflecting on what happened at Standing Rock, Grassrope said, "A lot of people came together. It was like our people had been sleeping for so long and living the way that we have, and then we woke up! We didn't step away from our way of life, but we are finding the way back to it."

Grassrope said the United States government reacted to what was happening with fear. The U.S. feared what happened at Greasy Grass would happen again, because all of the nations were united, even with their relatives from South America. It was a movement for everyone.

Allard offered her land for those who arose to resist the construction of Dakota Access Pipeline. It became Sacred Stone Camp.

Allard said, "Erasing our footprint from the world erases us as a people. These sites must be protected, or our world will end; it is that simple. If we allow an oil company to dig through and destroy our histories, our ancestors, our hearts and souls as a people, is that not genocide."

Allard, in an interview with Estes, recalls the names of the youths who led this movement, beginning in 2015: Bobbi Jean Three Legs, Jasilyn Charger, Takota Iron Eyes, Joseph White Eyes, Zaysha Grinnell and others.

Down in Wakpala, Bobbi Jean Three Legs, Waniya Locke, and Honorata Defender got together and said, "Let's have a run."

Joye said, "Is there anywhere to start a camp?"

Zaysha Grinnell, 15, speaks of the "oil boom" on her homeland, and the sexual violence and sex trafficking that the man camps brought to her homeland, the Mandan, Hidatsa and Arikara Nation in North Dakota.

"Our ancestors protected and honored this earth, and every day I try to walk in their footsteps the best I can."

This movement gave birth to other movements, including a global movement for divestment that shook banks and financial institutions.

Michelle Cook, Dine' human rights lawyer, describes the Indigenous Women's Divestment Delegations in Europe. Cook, co-organizer of the delegations, speaks of the divestment in fossil fuels with the same passion that she spoke before the Inter-American Commission on Human Rights in Jamaica. Cook and other Native women testified about the police abuses at Standing Rock.

In Europe, the delegations met with banks, financial institutions and members of Parliament, urging divestment in the Dakota Access Pipeline and Energy Transfer Partners.

Waste Win Yellowlodge Young, Ihunktowanna/Hunkpapa of the Standing Rock Sioux Tribe, said, "Our Delegation's presence puts a face to the Indigenous communities and lives who have been displaced, abused, and adversely affected by extractive industries throughout the world."

Cook speaks of women as the backbone.

"As protectors and guardians of their territories' lands and waters, Indigenous women are the foundation, backbone, and future of their tribal nations, perpetuating the survival of cultural well-being of all Indigenous people."

Divestment is a powerful strategy in the world of social justice movements, says Cook. She is the co-founder of the Water Protector Legal Collective at Standing Rock and serves on the Navajo Human Rights Commission. She is the founder of Divest Invest Protect.

At Standing Rock, with resistance in the form of the lockdowns, there were the daily duties of firewood and kitchen crews. Beyond the immediate, there was the big picture.

Andrew Curley, Dine' professor, writes of Indian law in "Beyond Environmentalism, NODAPL as Assertion of Tribal Sovereignty." This critical and analytical discussion of Indian law, sovereignty and resistance continues through the book with the words of his fellow authors.

Along with the articles on Treaties and Indigenous rights are the intimate letters exchanged between two friends, Tomoki Mari Birkett and Teresa Montoya.

The words come from the far south, east, and west, and from the north.

David Uahimeaikalei 'ohu Malle, Kanaka 'Oiwi scholar from O'ahu, is an instructor at the University of New Mexico. Like Estes, David is an organizer with The Red Nation in Albuquerque.

David points out how global funding is responsible for the desecration on the Mauna.

Today on the frontline at Mauna Kea in the Pacific, in the defense against telescopes on sacred land, there waves the banner, "Mni Wiconi, Water is Life." To the east of Standing Rock is the battle against Enbridge, and there too the banner waves.

"There are frontlines everywhere," says Freda Huson, Unist'ot'en, in the north.

"Standing Rock wasn't the first Indigenous stand against pipelines and it won't be the last."

"Just reoccupy your lands. Do everything like your ancestors. The ancestors are here helping us," Huson says, offering suggestions for organizing and occupying land.

Speaking of the power of water and river of life, Huson says, "You can't control it; that river is powerful. It's fast. It's a life-giver because it gives life to the salmon, it gives us life when we drink it, and it gives life to the plants and vegetation around it. And spiritually it's strong."

Joel Waters, Oglala Lakota, speaks of the greedy beast of an empire in his word song, "Death of Hydra," and concludes:

let their voices slay
the many heads of the black snake
let our words be the scythe
let our prayers be the fire
that cauterizes the wounds
of this greedy beast of an empire.

In the end, when the camps were gone, LaDonna Allard and others fed the communities and took food to the homes of Dakota, Lakota and Nakota of Standing Rock. The communities were cleansed and they planted 350 trees.

"I'm still here. I have not quit fighting," Allard says.

Layli Long Soldier, Oglala Lakota, writes in her poem Resolutions of direct action, freedom of speech and the right to be:

this is a ceremony

In The Beginning, he writes:

Jaskiran Dhillon grew up on Treaty Six Cree Territory in Saskatchewan, Canada. She is an associate professor of global studies and anthropology at The New School.

It is prophecy. A Black Snake will spread itself across the land, bringing destruction while uniting Indigenous nations. The Dakota Access Pipeline is the Black Snake, crossing the Missouri River north of the Standing Rock Indian Reservation. The oil pipeline united communities along its path—from North Dakota, South Dakota, Iowa, and Illinois—and galvanized a twenty-first-century Indigenous resistance movement marching under the banner Mni Wiconi—Water Is Life! Standing Rock youth issued a call, and millions around the world and thousands of Water Protectors from more than three hundred Native nations answered. Amid the movement to protect the land and the water that millions depend on for life, the Oceti Sakowin (the Dakota, Nakota, and Lakota people) reunited. A nation was reborn with renewed power to protect the environment and support Indigenous grassroots education and organizing. This book assembles the multitude of voices of writers, thinkers, artists, and activists from that movement.

Through poetry and prose, essays, photography, interviews, and polemical interventions, the contributors, including leaders of the Standing Rock movement, reflect on Indigenous history and politics and on the movement’s significance. Their work challenges our understanding of colonial history not simply as “lessons learned” but as essential guideposts for current and future activism.

Introduction: The Black Snake, #NoDAPL, and the Rise of a People’s Movement


Part I. Leading the Resistance


3. “This Fight Has Become My Life, and It’s Not Over”: An Interview with Zaysha Grinnell


4. Traditional Leadership and the Oceti Sakowin: An Interview with Lewis Grassrope


5. Taking a Stand at Standing Rock


6. “They Took Our Footprint Out of the Ground”: An Interview with LaDonna Bravebull Allard


9. The Great Sioux Nation and the Resistance to Colonial Land Grabbing


10. The Supreme Law of the Land: Standing Rock and the Dakota Access Pipeline


12. Beyond Environmentalism: #NoDAPL as Assertion of Tribal Sovereignty


16. Heal the People, Heal the Land: An Interview with Freda Huson


17. The Financing Problem of Colonialism: How Indigenous Jurisdiction Is Valued in Pipeline Politics


18. What Standing Rock Teaches Us about Environmental Justice


20. For Standing Rock: A Moving Dialogue


22. Standing Rock: The Actualization of a Community and a Movement


24. Lessons from the Land: Peace through Relationship


27. Decolonize This Place and Radical Solidarity: An Interview with Nitasha Dhillon and Amin Husain


29. Mapping a Many-Headed Hydra: Transnational Infrastructures of Extraction and Resistance