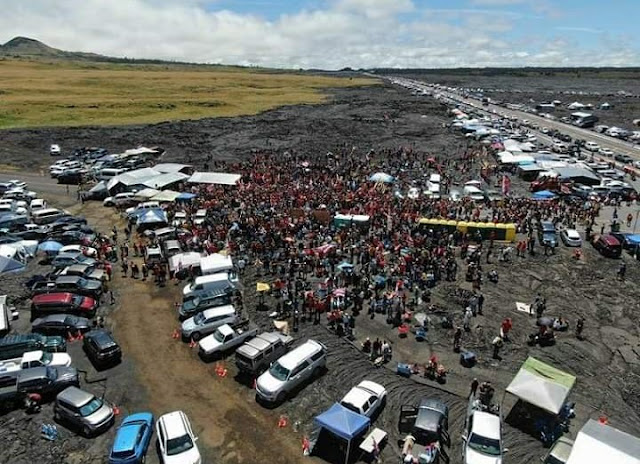 HAWAII: Law enforcement told Mauna Kea Protectors they will be arrested Dec. 26, 2019. This comes after the Governor used false PR as a tactic, promising to withdraw law enforcement. A similar tactic was used against Standing Rock Water Protectors in 2016, when they were told, 'It's all over, go home.'

On Thursday, Day 160 of protecting Mauna Kea, Protectors said in a video address that the Governor is making contradicting statements to the public. Protectors said the Hawaiian government is attempting to diminish their strength with a false narrative in the media.


"We're not going to fall for that."
Protectors said they were given the ultimatum to remove themselves and their structures or face arrest on Dec. 26, 2019.

Dec. 19, 2019
This morning it was announced that Governor Ige had made the decision to pull back law enforcement from their barricades that have closed the road since July 15th. He stated that as TMT is not able to move forward at this time Law enforcement would be withdrawing for the time being. This was reported on by multiple press outlets from the Governor’s press conference. Several hours after that the state issued an ultimatum to the Kiaʻi that conflicted with the Governor’s own words at his press conference. Kiaʻi have been given an ultimatum to move off Mauna Kea by the 26th of December or they will face arrest. This conflicts with the statement that the Governor gave saying that law enforcement would be withdrawing. The Governor also stated that $15 million dollars has been used on law enforcement operation on Mauna Kea since July. @staradvertiser originally reported that the stand down would last 2 months.

While the deadline to clear the road is December 26th, we do not believe that law enforcement will attempt to sweep kūpuna and kia'i on this day, but we must remain vigilant and prepared.


We are putting out a kāhea to all Hawai'i Island kia'i, to spend the holiday on the Mauna with the kūpuna and be prepared to kūpaʻa, stand with us, should state enforcement officers arrive on the 26th.

For all other kia'i, on neighbor islands and beyond, we ask that you be on standby for a kāhea. To all who come, be prepared for extreme weather and cold nights.

The road to the summit of Maunakea is currently open to the public via the side gravel road alongside the kupuna tent. Please drive carefully and slowly.

It is our wish that all kūpuna, all kia'i, state enforcement officers and administrators, and all the people of Hawai'i enjoy a peaceful holiday in the warmth and aloha of friends and loved ones.

Hau'oli Ao Polohiwa a Kanaloa, Lonoikamakahiki and see you on the Mauna!

I am ashamed of my government for thinking that they could have supreme sovereignty over sacred Hawaiian lands. This has been the problem all overt the world and what has it gotten us? A planet that it out of control, just like the businesses that are controlling our futures.
If we lose the sacred, then there is no hope for us.
I urge the governor to think carefully about what he is doing. How dare he think he is above the people
Cynthia Linet, Esq
Licensed Hawaiian attorney

Keep your story coming out on social media and reach out to celebrities. Jason Momoa mentioned you on national TV. Reach out to Dwayne Johnson also. Many other Natives on the mainland recognize and sympathize with your plight. Reach out to them for support, also. Greater numbers make more publicity, which generates more support.