More than 500 New Mexicans attend Environmental Day at the Roundhouse 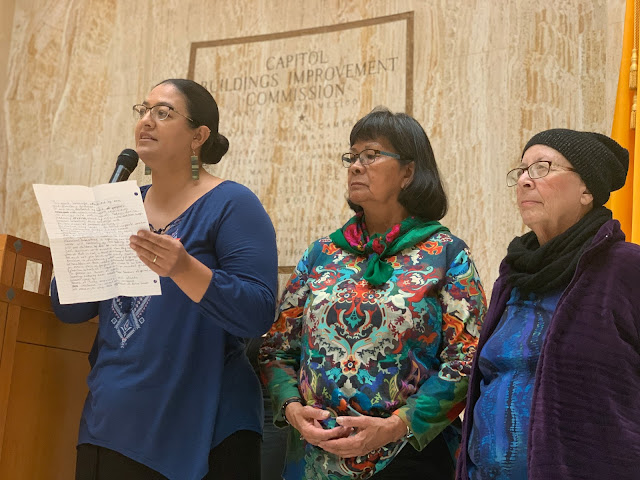 500-plus New Mexicans attend Environment Day at the Roundhouse


More than 500 environmental activists descended on the New Mexico Roundhouse on Tuesday to learn about critical climate, air, land and wildlife legislation, get tips on lobbying their elected representatives and hear heartbreaking testimonials of those living with the everyday consequences of oil, gas and coal extraction.


“I don’t feel safe in my own home,” said Penny Aucoin, who was at home near Carlsbad last week when a nearby WPX pipe burst and showered Aucoin and her husband as well as their animals with fracking wastewater. “I did not ask for this. I signed no contracts warning me about this risk. Where is the advocacy and help for families who become victims?  Protocol needs to be put into place so that this doesn’t not happen to anyone else ever.”

Aucoin spoke at a noon rally in the Rotunda featuring speakers from around the state, elementary-aged members of the Global WE, a Sierra Club climate action after school program and River Source which serves high school aged students, and legislative sponsors of key environmental legislation.


"Protecting our land and natural resources, including the night sky and soundscapes, should be important to all New Mexicans. We do this work for our children and grandchildren, including those yet unborn," said Theresa Pasqual of CVNM Action Fund. "It is not enough to protest. We must turn protest into action, action into votes, and ultimately, votes into change. "


N.M. Rep. Patricial Roybal Caballero is again sponsoring community-solar legislation to make solar accessible and affordable to everyone: “We need to demand climate action from the state House to the White House. We have to address climate change now. Our decisions today affect the lives of my 5-year-old grandson, my 3-year-old grandson, and all the grandchildren yet to come.”


Derrick Toledo, Indian Country organizer for Western Leaders Network, spoke about the importance of crafting strong state methane rules as federal safeguards to reduce the powerful greenhouse gas are being reversed: “Methane is an important issue that we have to deal with today to ensure a future for my daughter and our children and the future of tomorrow.” Toledo called on advocates to submit comments to the state for strong methane rules at methanemattersnm.org


Beata Tsosie-Peña of Tewa Women United gave a spoken-word performance on the heritage and culture of Greater Chaco and the damage ongoing drilling is doing to the community: “People stayed, learned, built, suffered, and, for a brief moment, thrived. … Houses of living ancients still stand. Resistance is collectively centered. We remain, to stop this oppression of Native lands.”


Sierra, an activist with the Rio Grande Chapter’s Global WE youth climate group, said: “We need to talk to each other. Our future is for all of us. Stand up and speak out. Leaders of New Mexico: You have the power. You can make things happen.”
For immediate release: Jan. 28, 2020
Contact: Camilla Feibelman, camilla.feibelman@sierraclub.org, 505-715-8388
Beata Tsosie-Peña, beata@tewawomenunited.org
Theresa Pasqual, Conservation Voters New Mexico Action Fund, trepasqual@gmail.com
Photos here (Photos by David McGahey, Sierra Club volunteer) or here