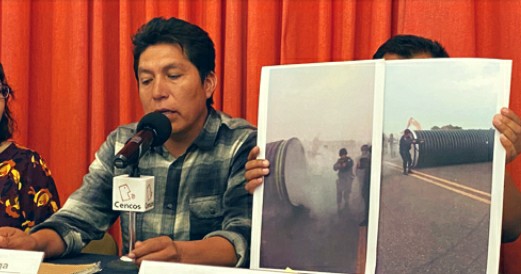 To the people of Mexico:
To the Networks of Resistance and Rebellion:
To the Sixth in Mexico and abroad:
To the press:
The National Indigenous Congress, Indigenous Governing Council, and Zapatista Army for National Liberation denounce the cowardly arrest of our compañero Miguel López Vega, CNI delegate, member of the Zacatepec community radio and of the People’s Front in Defense of the Land and Water of Puebla, Morelos, and Tlaxcala. This arrest was carried out by armed members of the bad government who, without identifying themselves, detained Miguel on a supposed arrest warrant.
The kidnapping of our compañero outside Government Secretariat Offices today, January 24, at 2:30 pm, is the response of those who say they govern this country to the originary people’s determination to prevent the destruction and industrial contamination of the Metlapanapa River. This repression is their answer to being confronted with life where they only saw money soaked in the pain of our people.
As peoples of the CNI-CIG, we voice our opposition to the destruction and privatization of the Metlapanapa River which, along with the other megaprojects of death, aims to subjugate our country with mourning and war.
We demand immediate freedom for our compañero Miguel López Vega.
Sincerely,
January 2020
Never Again a Mexico Without Us
National Indigenous Congress
Indigenous Governing Council

More:
Note: At least 20 companies intend to divert their toxic waste to the river Metlapanapa according to those who defend the river.
https://www.business-humanrights.org/en/30102019-defenders-of-the-river-metlapanapa-in-zacatepec-puebla
at January 26, 2020

I believe this all goes back to the original NAFTA agreement. Look and read the information on failed business. Thank you for your time in reading my comment. Georgee Harcus